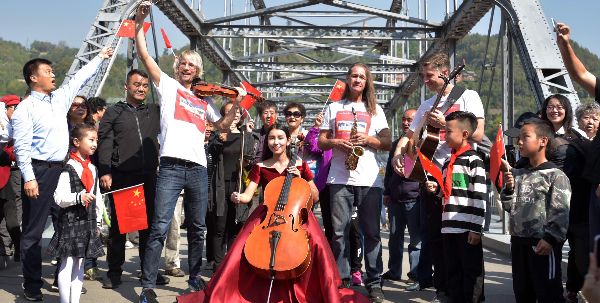 Having traveled to 41 countries internationally, this marks Dillingham’s 13th trip to China

Dillingham’s ability to build bridges between cultures, utilizing his fiddle, his skateboard, and his magnetic personality, is a story the world should be hearing about.”
– J.P.  Jenks, American Music Abroad program officer, U.S. Department of State

NASHVILLE, Tenn. – Oklahoman Americana and bluegrass fiddling maestro Kyle Dillingham, and his Horseshoe Road bandmates Peter Markes and Brent Saulsbury of Oklahoma, recently wrapped up their 2019 Silk Road and The Fiddle Sister State Tour through China. Dillingham, who made his Grand Ole Opry debut in July, journeyed along the ancient Chinese Silk Road to the cities of Qingyang, Lanzhou, Tianshui, and Baiyin. With fiddle in hand and joy in his heart, Dillingham once again made his self-proclaimed “musical diplomacy” a real-life method of international relations. Doing what he does best, he fiddled his way into the hearts and minds of his Chinese fans with his authentic brand of Americana and bluegrass roots music.

The first stop of their 10-day tour was in Qingyang, where some of the activities included a special cultural exchange performance at the Qingcheng County Grand Theater and an exchange program with college students at Longdong University.

Their next flight took them to Lanzhou for dinner with officials of the Gansu Provincial People’s Government: Mr. Zhang Baojun, Director-General Foreign Affairs Office; Mr. Zhang Hong, Division Chief of International Affairs of Educational Department of Gansu Province; Mr. Wang, Director of the Department of Veteran Cadres; and officials of Gansu Provincial People’s Association For Friendship With Foreign Countries (GPPAFC) Mr. Liu Xiaolin, Executive Vice President; Mr. Zhu Yuming, Division Chief of Sister City Affairs Division; Mr. Liu Zhiming, Office Director. After that they boarded a high-speed train to Tianshui for a performance at Tianshui Normal University. This became a beautiful and rare opportunity for the university violin professor to hear, interact and jam with the band on some American country music. “There was such an unbelievable joy and freedom that you could see coming over this violinist as she let go on some country fiddling!” said Dillingham.

Dillingham wrote a song to commemorate the tour, and to celebrate the 34 years of friendship between Oklahoma and Gansu Province, China. Calling it “Old Friends (老朋友)” he performed the song while on tour using a traditional Chinese guitar called a zhongruan.

“Old friends are very important in Chinese culture. The music I composed for the song mixes elements of traditional Chinese music, and traditional American folk music,” said Dillingham. The lyrics are, “sing with me; drink with me; share with me. I’ll soon be gone, but I’m coming back again.”

Acknowledging the recent PBS premiere of Ken Burn’s new Country Music documentary series, Dillingham noted, “While everyone is celebrating the history and importance of country and bluegrass music here in the USA, we were taking country and bluegrass music to new frontiers! It is hard to imagine that there are still places on this earth that have never heard this kind of music before, but two of the four cities we toured, Peter, Brent and I became the first American touring artists to ever perform in these cities! That is still incredible to me. As a member of the CMA, I am proud to be pushing the boundaries of country and bluegrass music in the world and representing the brand. Look at what the Oak Ridge Boys and Roy Clark were doing in Russia in the late seventies, and the kind of impact it had on the future. A little bit of country music can change a lot of things in this world. We feel that the work we are doing in China will certainly help US-China relations.”

About Kyle Dillingham:
Kyle Dillingham picked up the violin when he was nine, and eight years later, he gave two featured performances at the Grand Ole Opry in Nashville. Kyle is now managed by legendary impresario Jim Halsey, who has guided the careers of many great performers including Roy Clark, The Oak Ridge Boys and James Brown. Between Dillingham’s touching songwriting, classic covers and fiddlin’ favorites, he is sure to have audiences on their feet. Dillingham has represented America internationally in 41 countries, and is the youngest ever recipient of the distinguished Oklahoma Governor’s Arts Award, thus earning him the title of “Oklahoma’s Musical Ambassador.” He’s also performed for many governmental leaders including the Japanese, Thai and Saudi Arabian Ambassadors to the United States. Through his musical diplomacy, Dillingham has serenaded the King of Malaysia, the Princess of Thailand, and performed during Singapore’s National Day Celebration. His performance at the Beijing Central Conservatory was broadcast on Chinese national television.