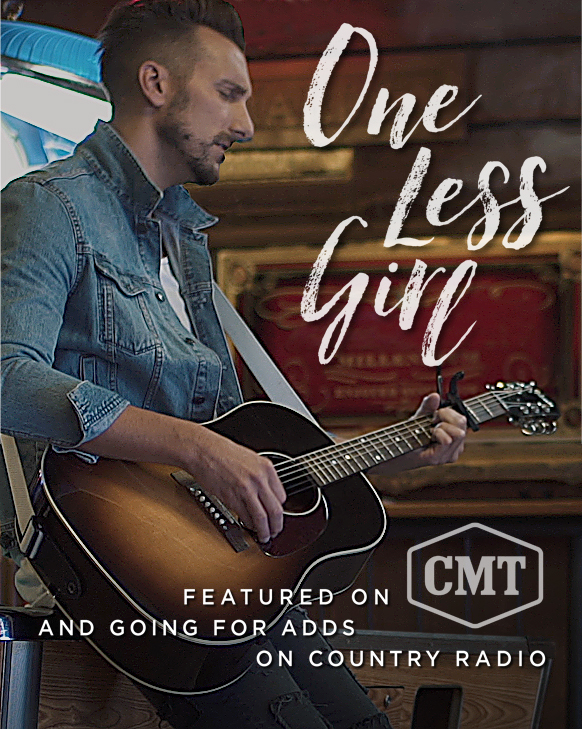 NASHVILLE, Tenn. – Nashville recording artist and Country crooner J.D. Shelburne has been very busy lately promoting “One Less Girl,” the first single from his 4th studio album, Two Lane Town. “One Less Girl” made its world-wide premiere on CMT in September (click here to watch), and is now starting to gain traction and make an impact at Country radio, with a growing number of Program Directors adding it to their station’s regular rotation.

“As an artist that has been in this town for 10 years, I can finally say I have a song on country radio! I have been working around the clock, touring non stop, meeting as many fans along the way as I can and making connections,” says Shelburne. ” I just picked up my 15th add on Country radio last week! I am thrilled for this and to see where it takes us. I truly feel the sky is the limit.”

With a reputation as one of the hardest working independent artists in Nashville, Shelburne performs at more than 230 live events per year, and is a regular feature on Nashville’s famous downtown Broadway corridor. Big stages are no stranger to Shelburne, who has opened for many household names in country music like Miranda Lambert, Jamey Johnson, Montgomery Gentry, Clay Walker, and many more.

“I had the opportunity to interview J.D. this summer and immediately got the vibe that he’s the real deal! When you listen to his music, that’s obvious, but talking to the man solidified that. He’s not only a great singer, he’s an exceptional songwriter. And in this business, it starts with those who put pen to paper to make the magic. J.D. is the complete package.”

“J.D. Shelburne is the next country music star to come from Kentucky. We’re playing him. You should be too.”

“J.D. is one of the hardest working independent singer/songwriters I know! He’s a small town Kentucky farm boy with tractors full of talent! His new single and video for “One less girl” is one of his best yet! His new EP “Two lane town” is miles king of the road! Look out for J.D. Shelburne…he’s in the passing lane to country music stardom!”

“We have witnessed J.D. build his following from the ground up and with “One Less Girl” he is taking his career to the next level.”

“Well produced, well sung and well written, J.D. Shelburne comes out with a super strong debut that is sure to be a hit with the listeners. Can’t wait to watch this guy’s career blossom.”

“J.D. was a delightful guest on the Z100 Radio Roadhouse! His musicianship was suburb and we loved hearing the stories behind the songs. He’s a solid performer and a fun personality!”

About J.D. Shelburne:
Country Artist J.D. Shelburne grew up on a tobacco farm in Taylorsville, Kentucky, a tiny town southeast of the Ohio River near Louisville, Kentucky. At age 19, he found a guitar after the death of his grandmother and began learning to play and sing on his own. By his sophomore year of college, he had found a few gigs at some local bars in the Louisville/Lexington, Kentucky area and developed a fan-base that eventually landed him on some of the biggest stages in the business, opening for some of the nation’s hottest stars.In the last few years, J.D. Shelburne has become one of Kentucky’s fastest rising stars, with album credits, countless shows, a loyal fan base, charity work that has raised thousands of dollars, and a list full of accolades that sets Shelburne apart from the rest.