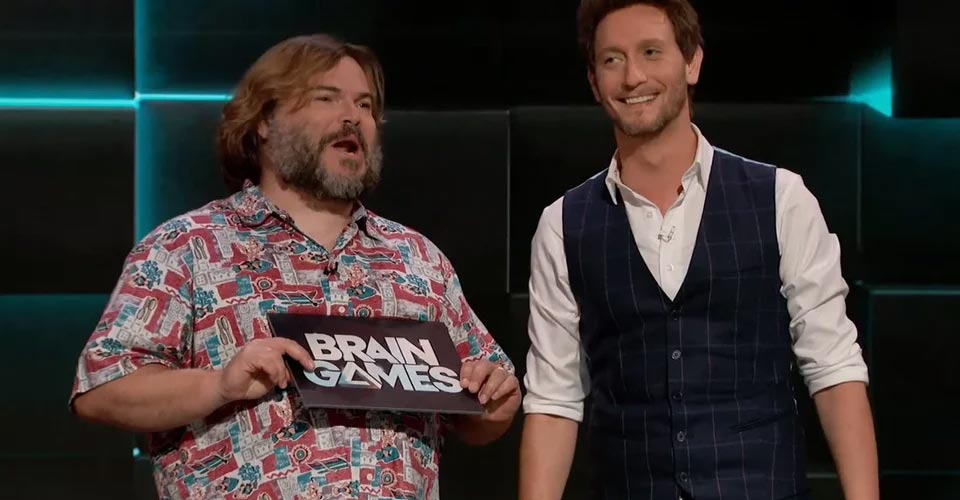 Los Angeles, Calif. – The Emmy-nominated Nat Geo’s Brain Games featured Jack Black as mentalist Lior Suchard was getting into his mind during the music themed episode which aired this week. Seen in the clip here: screenrant.com/jack-black-brain-games-mentalist-clip watch as Jack Black and his Tenacious D bandmate Kyle Gass learn how music affects the brain. Wonder what song he was channeling?? Well, it was none other than Don McLean’s “American Pie”!

The reboot of Nat Geo’s series returns with host Keegan-Michael Key, adding a Hollywood twist to its classic mind-bending format by challenging the world’s biggest celebrities to realize their exceptional brain power through fun and highly entertaining interactive games, illusions and social experiments. Key along with world-famous mentalist Lior Suchard and field correspondent and science communicator Cara Santa Maria, guide celebrities, including Anthony Anderson, Kristen Bell, Jack Black, Mark Cuban, Ted Danson, Tiffany Haddish, Dax Shepard, Megan Trainor and Rebel Wilson, through fun and exciting experiments, illusions and demonstrations that will help them realize their untapped brain power. The results are hilarious, surprising and interactive, and will keep you on the edge of your seat.

In addition to the guests featured in each episode, additional celebrities make cameo appearances throughout the season, including Tim Allen, Colin Hanks, Tom Hanks, Kevin Hart, Gillian Jacobs, Thomas Middleditch, Jordan Peele, Ben Schwartz and Marcus Scribner. The new season also includes a mixture of in-studio and in-the-field game components; physical and mental games; and the introduction of the Gauntlet, a series of simple, yet challenging, brain games, faced by each celebrity guest, that delight and confound.

Filmed in front of a studio audience, the show investigates topics like distinguishing fact from fiction, manipulating the brain through filmmaking, changing neural patterns through music, falling in love and maximizing our mental potential through sports. In a hilarious battle of the sexes, the series also explores the cognitive differences between men and women and shows us through a head-to-head battle of kids vs. grown-ups just how age affects brain power.