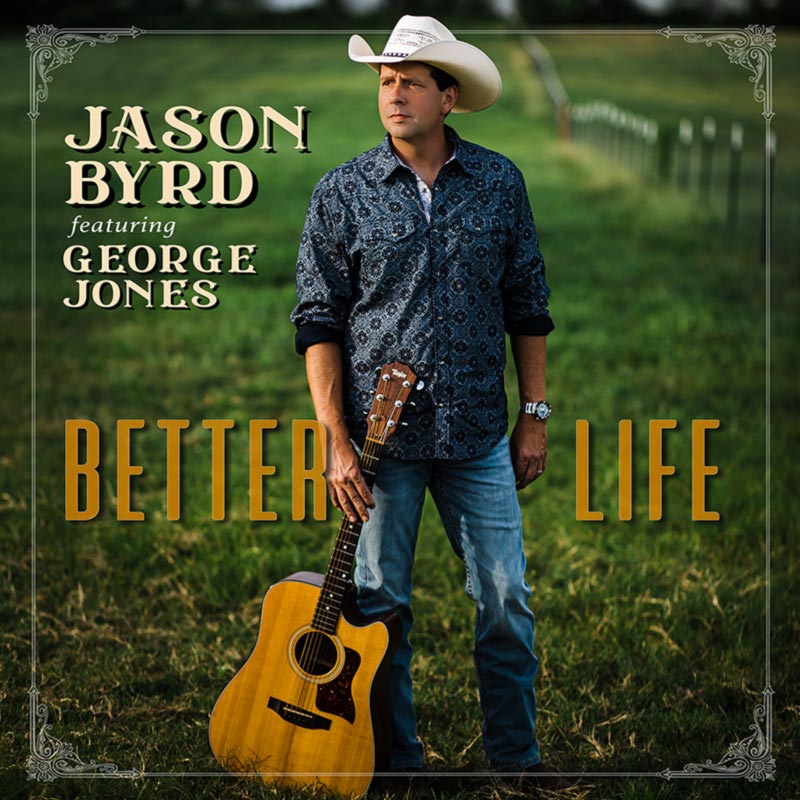 “Better Life” Available to Download and Stream on All Digital Platforms

“I am honored that Jason did this song. George and I love Jason and his music and George would be so proud of that song if he was around today to hear it. I hope the song goes to #1 and people will appreciate it as much as I do.” – Nancy Jones

“I have always loved George Jones’ music for as long as I can remember. He’s been missed and now, thanks to Jason Byrd, we all know what it’s like to have enjoyed a Better Life!” – Johnny Lee

“Jason Byrd loved George Jones. George Jones loved Jason Byrd. I had the pleasure of producing both of these great singers. Listening to the two of them sing this song together took me on a magical ride back to those awesome studio days. I can’t wait to hear this one on the radio. Beautiful job by Jason and George.” – Buddy Cannon

“In an era where it is becoming increasingly harder to find truly great traditional country music, upon hearing the new track, “Better Life” by Jason Byrd, the lyrics, along with the solid vocals by Byrd, is reminiscent of what a country fan would hear perhaps in the 1970s when Jones and Haggard ruled the airwaves! In fact, especially exciting is that George Jones can be heard on “Better Life”, delivering his final vocal treatment to a song both George, and fans of great traditional-sounding country music would be proud!”  – Ken Shelton, WFXY in Phoenix, AZ

“Jason Byrd really tugs at the heart on the moving traditional country ballad “Better Life,” and the inclusion of country king George Jones helps elevate it to a higher level. The listener can recall Joe Nichols, and this duet ballad is sensational.” – Markos Papadatos, Digital Journal

NASHVILLE, Tenn. – Country singer/songwriter Jason Byrd tugs at the heartstrings with the release of his new single “Better Life” featuring George Jones. The profound tune walks through the beginning of a love story and a life well lived here on Earth and ends with the reassurance of peace in Heaven. Byrd’s powerful lyrics take listeners on a full-circle journey, highlighting the simple pleasures of life that have the power to change it in the best way. “Better Life” proves Byrd’s strong faith and incredible talent as well as Jones’ legendary voice. The “Better Life” lyric video was premiered by Country Rebel with the single premiered by Cowboys & Indians and is available to download and stream on all digital platforms now!

“Even as a kid, I can remember being a fan of George’s music.” shares Byrd. “I would’ve never imagined that I would get the chance to meet him, let alone have him become my mentor and friend. Having the chance to record a duet with such an amazing artist was one of the biggest highlights of my musical career. I’m really happy that it is finally seeing the light of day and hope that his fans enjoy hearing it as much as we enjoyed recording it. I miss my friend and his music and I hope that I am making him proud to see that there are still some of us out there trying to keep traditional country music alive. Thank you, Cowboys and Indians for premiering the single and Country Rebel for premiering the lyric video.”

Byrd’s relationship with the legendary George Jones began when Byrd was chasing his musical dreams in the early nineties. The two developed a close friendship as Jones was someone Byrd had looked up to for most of his life. Jones opened many doors for Byrd, taking him out of the local honky-tonk scene to significant milestones, playing large stages nationwide including The Grand Ole Opry, and opening for some of country music’s biggest names. The release of “Better Life” allows Byrd to honor his friend and gives fans the chance to hear a special, never-before-heard recording with Jones’ one last time.

For more information and everything Jason Byrd, please visit jasonbyrdmusic.com.

About Jason Byrd:
Jason Byrd was just 19 years old when he followed in his family’s footsteps and became a fireman. But there was another fire that burned within him, and that was music. In the early nineties, Byrd found himself balancing a career in the fire department with a career in Music City, traveling the 490 miles each way with the determination to make both of his dreams come true. Yet, in many ways, it wasn’t until the day that Byrd met the legendary George Jones that the trajectory of his entire career forever changed. Soon, small gigs at local bars and honky-tonks turned into major opportunities on stages across the country, opening for powerhouse artists such as Tracy Lawrence, Loretta Lynn, and Dierks Bentley. In the summer of 2019, Byrd made the decision to retire from his position as the Battalion Chief with the Tallahassee Fire Department. But his musical story was far from through. Byrd recently made the decision to finally resurrect an unreleased song he and Jones had worked on together many years ago, a song that is now his current single “Better Life.”