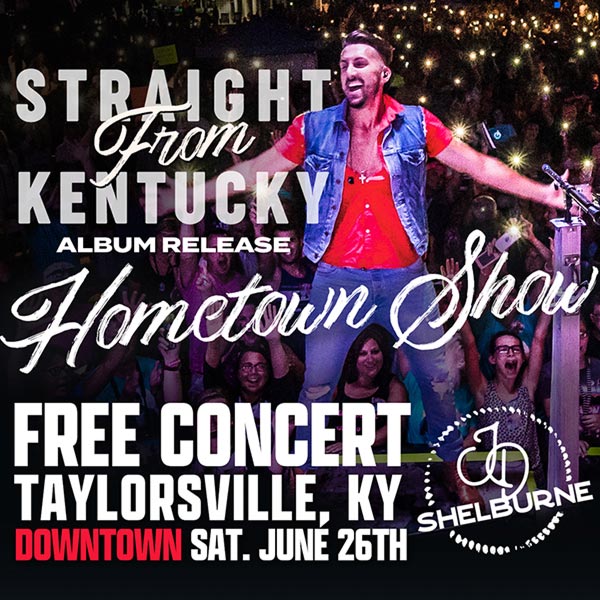 New Album ‘Straight From Kentucky’ To Be Released June 25

TAYLORSVILLE, Ky. – Country music standout JD Shelburne announces his 2021 ‘Hometown Concert’ in Taylorsville, KY on Saturday, June 26 at 7 pm. This will mark the fifth ‘Hometown Concert’ that Shelburne will host in Taylorsville, which will also serve as the official album release party for his new album, Straight From Kentucky. Shelburne is certain to bring the house down with his first full-length album featuring 11 tracks including the recent CMT #1 hit, “Church Pew Bar Stool.” Fans are encouraged to bring the family and a lawn chair down to Main Street for a free concert by none other than Taylorsville’s own, JD Shelburne.

“I am thrilled to announce that June 26th is the date for my ‘2021 Hometown Concert’ to celebrate the release of my brand-new forthcoming album Straight from Kentucky,” shares Shelburne. Due to circumstances beyond our control last year, we decided to postpone the 2020 album release/hometown show for the safety of everyone. I will also be releasing my first full-length album the day before! A huge thank you to the sponsors for hanging in there with us and making it happen this year.”

Shelburne kicked off 2020 with the release of the album’s first single, “Straight From Kentucky.” Shortly after the single was available, the live entertainment industry came to a screeching halt. Although the year was full of twists and turns, Shelburne was determined to stay connected with his fans and ultimately released “Church Pew Bar Stool” and “Bottoms Up Sundown,” which are both featured on the album. Shelburne has been a force in the music industry, with features from CMT, GAC, Newsmax, and NBC, and his busy tour schedule proves his fans always want more. He graced the cover of the 2020 Kentucky Tourism Visitor’s Guide which shares travel tips, stories, and regional highlights for tourists and visitors. With the easing of pandemic restrictions, the Kentucky native and new father is ready to hit the road. After building close bonds with fans through live interactions through virtual performances during quarantine, he is highly anticipating his 2021 tour dates. Shelburne has a lot in store for the upcoming months that country music fans will not want to miss!

“Straight From Kentucky was produced by Phil O’Donnell and features eleven songs total, four of which I co-wrote with some of Nashville’s most successful writers,” said Shelburne. “I honestly feel like this is my best collection of songs that I have recorded yet! I am stoked to get to see my fans again in person and to play these songs for them for the first time live!”

About JD Shelburne:
Nashville-based country music artist JD Shelburne was raised on a tobacco farm in Taylorsville, Kentucky, just outside of Louisville. When JD was 19, he found a guitar after the death of his grandmother. He quickly learned how to play it, and began writing and singing songs on his own. By his sophomore year of college, he had found a few gigs at some local bars in Louisville & Lexington, Kentucky area venues, developing a large base of fans along the way. Fast forward to today, JD’s current single “Bottom’s Up Sundown” is paving the way to his forthcoming album Straight From Kentucky.

His debut single and video for “One Less Girl” world premiered on CMT in 2018, and then went on to become a Top 30 Music Row charted song at country radio. CMT again world premiered his second song and video for “She Keeps Me Up Nights” in April of 2019, which peaked at #3 of their 12 Pack countdown series. In 2020, Shelburne was featured on the cover of the 2020 Kentucky Tourism Visitor’s Guide, Kentucky Living, and was the May Artist of the Month for Texas Roadhouse. JD’s video for “Church Pew Bar Stool” hit #1 on CMT’s 12-pack countdown and he was recently honored with a display at the Kentucky Music Hall of Fame as well as a formal acclamation from Governor Andy Beshear of Kentucky, honoring JD Shelburne for his accomplishments in country music.

To keep up with new music and upcoming show announcements visit www.jdshelburne.com.