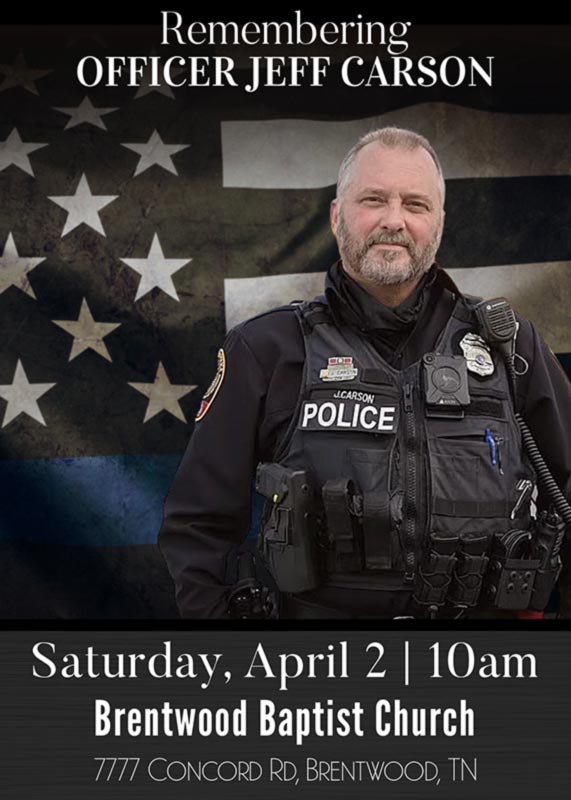 FRANKLIN, Tenn. – After a successful career in country music, including several chart-topping songs, Officer Jeff Carson joined the Franklin Police Department on May 27, 2008. During his tenure with the FPD, Carson earned six commendations, a Chief’s Award for Excellence, and was recently promoted to Police Officer-2

Jeff’s loss is widely felt, across several communities: country music, law enforcement, and the entire Franklin, Williamson County community, which he proudly served and protected for the last 14 years.

Thank you, Jeff, for your life of service and song.

All are invited to honor, remember, and celebrate:

Citizens wishing to pay their respects along the below route are encouraged to do so safely: Concord Rd to Franklin Rd, to Mack Hatcher, to Murfreesboro Rd, to the Public Square, to Main Street, to Columbia Ave, past Franklin Police Headquarters, to Williamson Memorial for the graveside service.

The family has requested that, in lieu of flowers, donations be made to the Franklin Police Department’s Law Enforcement Assistance Fund, a 501(c)(3) organization that provides financial assistance to Franklin Police Officers during unexpected life events, and college scholarships to officers’ children.

Country music hitmaker and Academy of Country Music award-winner Jeff Carson died of a heart attack Saturday, March 26th, 2022 at Williamson Medical Center in Franklin, Tennessee at the age of 58.

Carson was born in Tulsa, Oklahoma, and began his musical career early on singing in church. He recorded demos, including Tracy Byrd (“Walkin’ To Jerusalem”), Tracy Lawrence (“I See it Now”), Reba McEntire (“The Heart Is A Lonely Hunter”), Tim McGraw (“I Wouldn’t Want It Any Other Way”), Faith Hill (“It Matters To Me”), Mark Wills (“Places I’ve Never Been”), Diamond Rio (“Mirror Mirror”) among others. “Yeah Buddy,” was his first charting single and was followed up with ‘Not On Your Love,’ which went number one. The following single, ‘The Car,’ became a top-five hit, topping out at number two and won Carson his first Academy of Country Music award for “Video of the Year.” Carson had several other singles, including “Real Life (Was Never The Same Again)” from his album “Real Life.” In total, Carson’s career achieved 14 charted singles on the Billboard chart. Carson took a break from music to become a law enforcement officer with Franklin Police Department in Williamson County, Tennessee, where he remained on the police force.

Returning to music in 2019, he signed with Encore Music Group and has been in the studio with Buddy Hyatt recording a specialty album to be released later this year that included duets with Michael Ray, Darryl Worley, Mark Wills, and Craig Morgan. Jeff Carson is survived by his wife Kim Cooper Carson, son Dayton Grei Herndon Carson, mother Virginia Norton, brother Steve Herndon, sister Karen Spurlock, as well as aunts, uncles, nieces, and nephews.