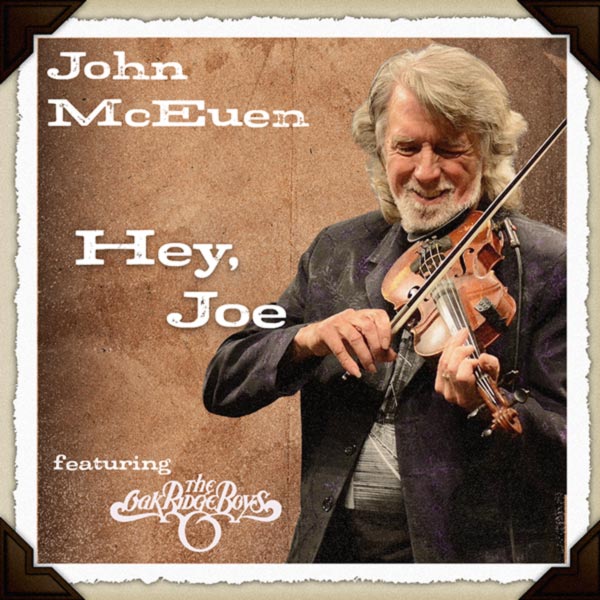 NASHVILLE, Tenn. – Multi-instrumentalist JOHN McEUEN is back with a new recording of the Americana classic, “HEY JOE,” featuring the OAK RIDGE BOYS. The new single impacts July 2, and is the second release ahead of McEuen’s upcoming album, THE NASHVILLE SESSIONS, set to drop later this summer.

After ending his 50-year run with the NITTY GRITTY DIRT BAND, which he co-founded, McEuen moved to Nashville earlier this year. He came to Nashville because its where he wants to spend this phase of his decades-long career.

“In sports, the fourth quarter is usually the most exciting, and a lot can happen in it,” McEuen says. “I came to Nashville because this part of my career is my fourth quarter, and I have a lot of things I want to do.”

In true John McEuen style, there’s a story behind each track that’s as enticing as the music itself. “Hey Joe” and The Nashville Sessions are the result of collaborations collected and perfected over many years. McEuen and the Oak Ridge Boys originally recorded the vocals for “Hey Joe” in 1984. It wasn’t until he got to Nashville that McEuen felt he could devote the time and attention to putting the final touches on it.

The lead-off single, “Back In History,” was released in late June. McEuen co-wrote “Back in History” with the legendary LEON RUSSELL after Leon’s son invited him to visit their home after bumping into one another late one night, just off Broadway in Nashville. John tells the rest.

“At Leon’s about 45 minutes later, as I played guitar and we talked about world events in his basement studio, Leon said ‘I didn’t know you played like that. Keep it going. Let’s write a song.’ A few hours later we were done,” McEuen says. “Leon sang, played drums, keyboard, and I did the strings —  guitars, bass, and mandolin on a cheapo mando in the studio I borrowed, and ‘Back in History’ was born that night.”

In addition to the Oak Ridge Boys and Russell, the upcoming album features collaborations like “MY WARFARE,” with American Roots superstar MARTHA REDBONE. McEuen calls the song “one of my finest folk music recordings.” McEuen’s long-time picking partner and fellow Dirt Band alum JOHN CABLE provides support on “DOWN BY THE SEA.” The album closes with a special, spoken-word track that cements McEuen’s skills as a great American storyteller. “THE NEWSMAN,” which takes listeners back to 1967 for a story about “a very influential person,” is taken from his recent book, THE LIFE I’VE PICKED (Chicago Review press) about his life in music.

ABOUT JOHN McEUEN:
John McEuen has been entertaining audiences as an entertainer, string player, and storyteller for more than 50 years. As a co-founding member of the Nitty Gritty Dirt Band, he recorded and performed until 2017. Previous albums include Made In Brooklyn (2016, Winner, Best American Album – Independent Record Manufacturers), String  Wizards (2006), and The Music of the West (2007, Winner, Western Heritage Award). The recipient of two Grammy Awards, John continues to record new music and spoken word tracks (with music), as well as touring the country with his band and multimedia show. John and his wife, Marilyn, make their home in Franklin, TN. For more information, visit johnmceuen.com.