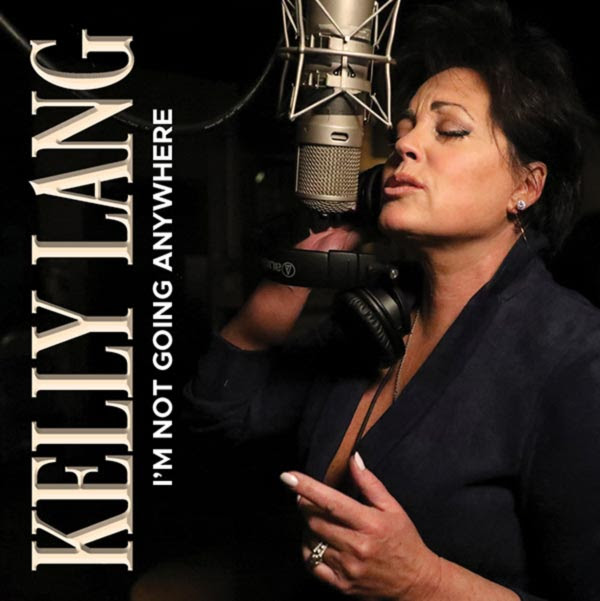 Lang’s Story Recently Featured In American Songwriter
“This is the most beautiful song I have ever heard in my 71 years. So, so beautiful and emotional. It brings on tears every time I listen to it.”
Donald W.

“I’m fighting cancer right now, and I know how you were feeling about not showing your weakness with your mate. It’s hard to admit you need help. Until I came to grips with it, my wife struggled to get through to me that she was going to be here no matter how rough the road gets. Beautiful song, Kelly. It brings me to tears, but happy tears.”
Barry C.

“I love this song, and when I heard it for the first time on the Ascension commercial, I knew it was you. Thank you for such a wonderful song. I’m sure it has comforted many people.”
Carolyn T.

NASHVILLE, Tenn. – Nationally acclaimed singer/songwriter Kelly Lang’s current standout single “I’m Not Going Anywhere,” continues to grow momentum across the United States, offering comfort and hope to every listener. As part of Ascension Hospital’s national campaign, this landmark commercial has touched people from every walk of life. Due to the overwhelming success and interest from multiple outlets, Lang is now adding public speaking to her list of credentials. She is now available for speaking engagements, both in-person and virtually. As part of her inspirational journey, Lang has opened up to the world about her struggle with breast cancer and how she overcame the illness with the help of her family, friends, fans, and even comedy. Each appearance will also feature a performance of songs written during this difficult time. For more information or booking opportunities, visit KellyLang.net.

During a recent interview with American Songwriter, Lang explained “It was God working through me, and I just held the pen as I wrote the song “I’m Not Going Anywhere.” But as a cancer survivor, I want to tell my secret on what I gained from it. You hear the word cancer and some immediately think it is a death sentence, but I chose to look at it as my “life” sentence. I began to live more boldly and appreciate life much more. After my diagnosis the sky looked bluer, the grass looked greener, and I truly began to soar, challenging myself each day.”

“This whole experience has been very humbling,” shares Lang. “This commercial couldn’t have come at a better time, honoring the caregivers and lifting up the patients during the pandemic. I have received messages from around the world sharing their heartfelt reactions to I’m Not Going Anywhere.’ This has opened so many doors and I look forward to sharing my story in person with you soon!”

Lang was inspired to write the song in 2004 as she watched a close friend manage a loved one’s illness. Three months later, she was diagnosed with stage two breast cancer and began a journey of her own at Ascension Saint Thomas Midtown Hospital in Nashville, Tennessee. In remission since 2005, Kelly has said that she hopes her voice can echo beacons of light and encourage patients with cancer to continue fighting. “I’m Not Going Anywhere” has been recorded by country legends T.G. Sheppard and Crystal Gayle, featured in Burt Reynolds’ movie, The Deal, and was included on Lang’s album 11:11, but never released as a single. In 2019, a portion of the song was picked up for a regional campaign in Nashville and surrounding markets by Ascension Saint Thomas Hospital. After an overwhelmingly positive reaction from the area, it is now being used in television and radio commercials across the country, soaring Lang’s popularity to new heights. To watch the full music video for “I’m Not Going Anywhere,” visit HERE.

Here’s a link to Ascension Hospitals National ‘Your Care Is Our Calling’ 60-second ad.

Lang recently released Old Soul, an album featuring 14 covers of critically acclaimed songs that highlight Lang’s love and appreciation for the timeless classics on September 18. Surviving the tests of time, these serendipitous spins on popular hits of the 60’s – the 90’s brush the dust off of a time capsule to uncover the feel-good intent of simpler times. Old Soul dances onto the scene with unrivaled grace and distinctive dynamic, transporting listeners back to music’s greatest era. Sponsored by Springer Mountain Farms Chicken, Old Soul is available to download and stream on all digital platforms.

As an artist, Lang has released several albums including 11:11, Shades of K, Throwback, Obsession, and Iconic Duets with her husband, T.G. Sheppard. In the spring of 2020, Lang re-released her classic children’s album Lullaby Country, which was originally sold at Cracker Barrel.

While being interviewed by Governor Mike Huckabee about her career in country music and her album, ‘Old Soul’ which was released on September 18th, 2020, Governor Huckabee surprised Lang with a trophy signifying a special induction into the Oklahoma Music Hall of Fame.