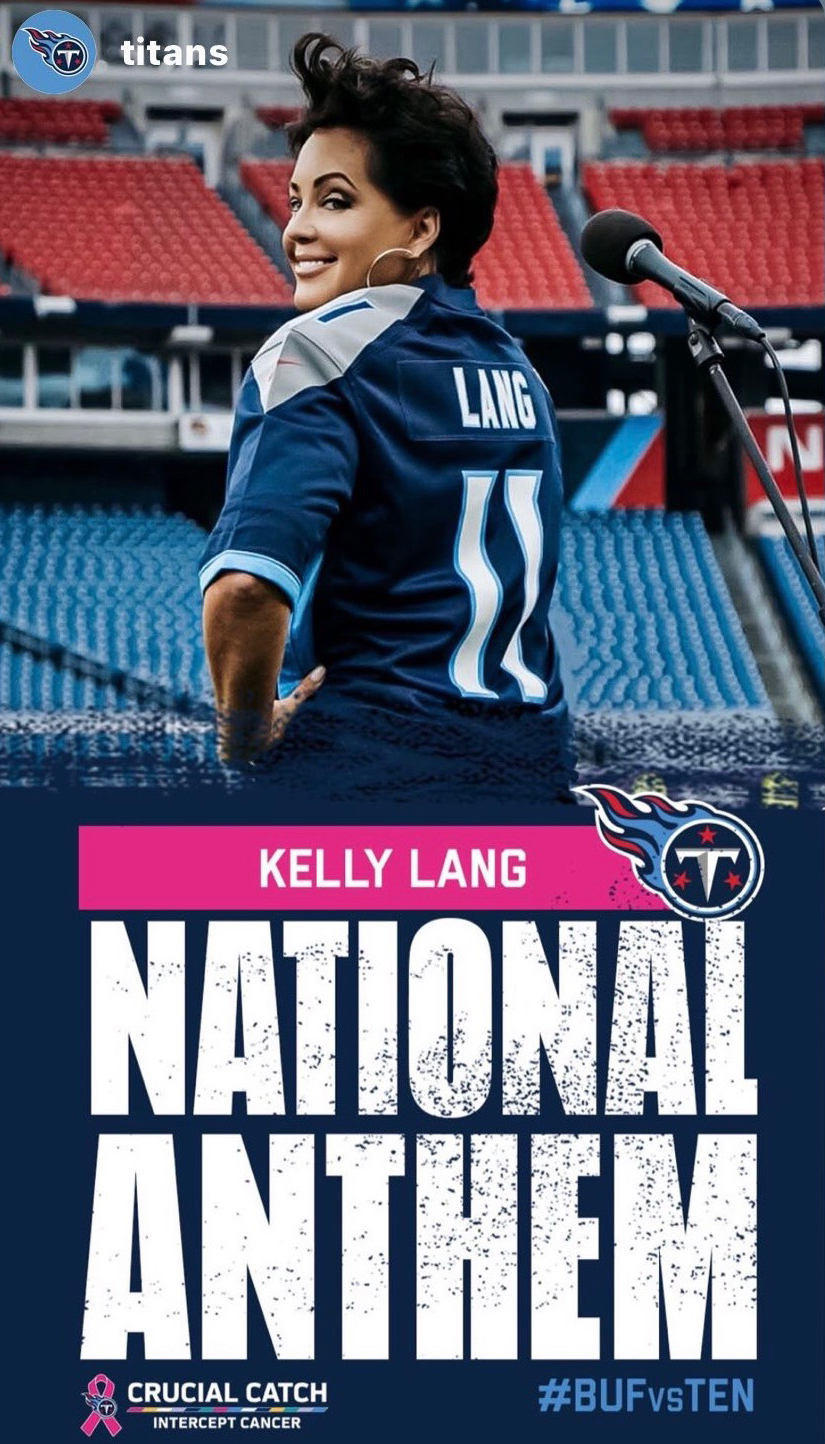 NASHVILLE, Tenn. – Singer/songwriter Kelly Lang did not fumble at the opportunity when asked to perform the National Anthem at the Tennessee Titans vs. Buffalo Bills NFL game on October 13th in honor of Breast Cancer Awareness month. Lang herself is a 15-year survivor of breast cancer and a long-time Tennessee Titans football fan. The game was aired on CBS at 6 pm CST. With a grateful heart, Lang was excited to sing the Titans on to a victory at Nissan Stadium!

“I’m so very honored to have been asked to sing our National Anthem for the Tennessee Titans / Buffalo Bills game. Since it is October and breast cancer awareness month, it is with a humbled heart that I am alive and well as a 15-year breast cancer survivor due to the excellent care I received at Ascension Hospitals. I couldn’t have been more excited to sing my heart out for our country and for the Titans,” shares Lang.

Lang recently released ‘Old Soul;’ an album featuring14 covers of critically acclaimed songs that highlight Lang’s rare love and appreciation for the timeless classics on September 18. Surviving the tests of time, these serendipitous spins on popular hits of the 60’s – the 90’s brush the dust off of a time capsule to uncover the feel-good intent of simpler times. ‘Old Soul’ dances into the scene with unrivaled grace and distinctive dynamic, transporting listeners back to music’s greatest era. Sponsored by Springer Mountain Farms Chicken,‘Old Soul’ is available to download and stream on all digital platforms.

As an artist, Lang has released several albums including ‘11:11,’ ‘Shades of K,’ ‘Throwback,’ ‘Obsession’, and ‘Iconic Duets’ with husband, T.G. Sheppard. In the spring of 2020, Lang re-released her classic children’s album ‘Lullaby Country,’ which was originally sold at Cracker Barrel.

While being interviewed by Governor Mike Huckabee about her career in country music and her latest self-produced album, ‘Old Soul’ was released on September 18th, Governor Huckabee surprised Lang with a trophy signifying a special induction into the Oklahoma Music Hall of Fame. The City of Nashville and Oklahoma City both officially proclaimed September 18, 2020, as Kelly Lang Day.