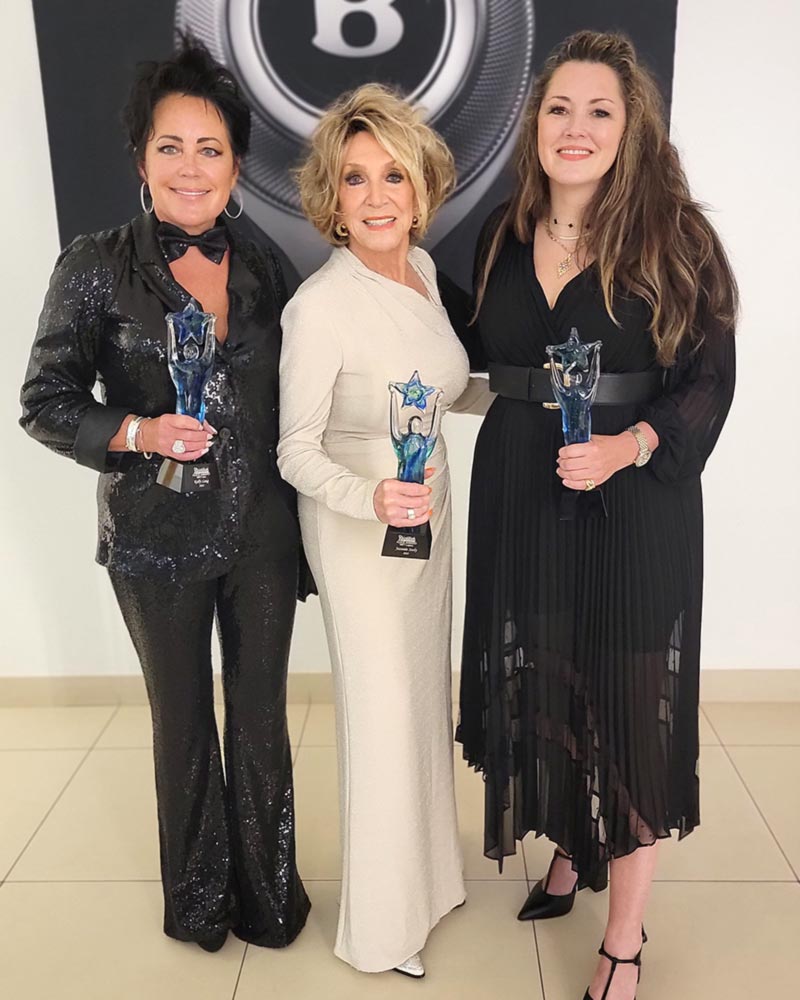 NASHVILLE, Tenn. – Nationally acclaimed singer/songwriter Kelly Lang received the ‘Icon Award’ at The Alice Awards Gala as part of The Southern Women in Film & Television (SWIFT) Summit this past weekend. The Alice Awards recognize women who have all demonstrated perseverance in the pursuit of their dreams despite difficulties, hardships, and life’s circumstances and each has emerged stronger. The SWIFT Summit that spanned the entire weekend included the Alice Awards Ceremony and Gala Dinner, red carpet events, speaking presentations, and more. Lang was honored for her inspiring story and creative participation in the entertainment industry through songwriting, empowering the next generation of talented women!

“To be recognized by your peers for what you do is much appreciated and never taken for granted,” shares Lang. ”To be chosen for the ‘Icon Award’ is very humbling since there are so many other talented women who could have been selected. I am deeply touched to be acknowledged in such a special way.”

Lang has issued a Deluxe EP featuring her song, “I’m Not Going Anywhere” after being seen and heard across the United States as part of Ascension Hospital’s ‘Your Care Is Our Calling’ national campaign, honoring caregivers and the patients they serve. Her new autobiography, also titled I’m Not Going Anywhere, highlights her journey as a 17-year breast cancer survivor, along with her healing experience and the unfolding of her love story with country music legend T.G. Sheppard. The book can be purchased on Amazon.com and is now available in hardcover due to popular demand. Fans can receive autographed copies at KellyLang.net.

About Kelly Lang:
Kelly Lang is a prolific singer/songwriter from Oklahoma City, Oklahoma, who has called Hendersonville, Tennessee home since moving there as a child. Growing up in country music, her father, Velton Lang, was the longtime road manager for superstar Conway Twitty. Being around great legends in the music business gave Kelly the burning desire to pursue her own personal music career.

As an artist, Lang has released several albums including ‘11:11,’ ‘Shades of K,’ ‘Throwback,’ ‘Obsession’, and ‘Iconic Duets’ with her husband, TG Sheppard. In the spring of 2020, Lang re-released her classic children’s album ‘Lullaby Country,’ which was originally sold at Cracker Barrel.

About the Alice Awards:
The Alice Awards Gala, a fundraiser for the local Women in Film chapter, each year honors women in the entertainment industry who exemplify the spirit of Alice Guy-Blache, an extraordinary woman whose strides in filmmaking have gone unpublicized for decades. Guy-Blache experimented with sound during the silent era, with color-tinting during the black & white era, and even with all-black casts, and she did all this starting in 1896. The women recognized at this ceremony have all demonstrated perseverance in the pursuit of their dreams despite difficulties, hardships, and life’s circumstances and each has emerged victorious. The presenting sponsors for the 2022 event are Bentley Motors, Saunders Electric, and Wang Vision Institute.

About The SWIFT Summit:
The Alice Awards is a highlight of the Southern Women in Film & Television Summit, three days of entertainment industry panels, workshops, and networking activities, plus special events including a celebrity fashion show, a songwriters showcase, featuring an array of talented female songwriters, and the Alice Awards Gala.

About Nashville Women in Film & Television:
Nashville Women in Film and Television is a 501(c)(3) nonprofit corporation organized and dedicated to advancing professional development and achievement for women working in all aspects of film, television, and all other screen-based interactive media. The organization is committed to helping women achieve their highest potential within the global entertainment, communications, and media industries and to preserving the legacy of women within those industries.