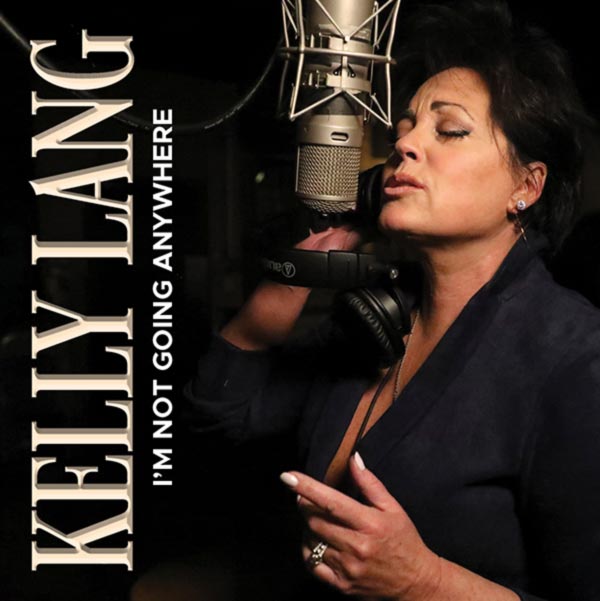 “Kelly Lang is the gold-plus standard in the country music scene. Her single ‘I’m Not Going Anywhere’ is an anthem of hope during these trying times that we are living in today, and it is worth more than just a passing glance.”
– Markos Papadatos, Digital Journal

“With Kelly’s stunning vocals, the industry veteran showcases pure talent and her heart of gold with I’m Not Going Anywhere. The song is a slow emotional ballad which can be implemented in different ways based on the listener’s current feelings.”
– Trevor Justin, Country Sway

NASHVILLE, Tenn. – Singer-songwriter Kelly Lang’s song, “I’m Not Going Anywhere” has been seen and heard across the United States as part of Ascension Hospital’s ‘Your Care Is Our Calling’ campaign, honoring caregivers and the patients they serve. As a result of the campaign and at the requests of fans around the world, Lang has re-recorded “I’m Not Going Anywhere” and is releasing a deluxe EP, which includes a piano version, an orchestrated version, a story behind the song as well as a music video, available today. Resonating positivity in the hearts of every listener, “I’m Not Going Anywhere” offers hope and strength, often being compared to Debbie Boone’s, “You Light Up My Life.” As part of a special exclusive world premiere, Newsmax debuted a portion of the music video on American Agenda with Heather Childers and Bob Sellers yesterday. Fans can listen to the song HERE or watch the entire official music video HERE.

“What an honor it is to receive such kind messages from so many people about my song,” shares Lang. “It is very humbling to hear how my words and music have touched the hearts of those in need of comfort. As a songwriter, I hope this is also an encouragement to others who write songs to never give up on their musical dreams. This song was written 16 years ago, and only now being heard so widespread.”

Lang was inspired to write the song in 2004 as she watched a close friend manage a loved one’s illness. Three months later, she was diagnosed with stage two breast cancer and began a journey of her own at Ascension Saint Thomas Midtown Hospital in Nashville, Tennessee. In remission since 2005, Kelly has said that she hopes her voice can echo beacons of light and encourage patients with cancer to continue fighting. “I’m Not Going Anywhere” has been recorded by country legends T.G. Sheppard and Crystal Gayle, featured in Burt Reynolds’ movie, The Deal, and was included on Lang’s album 11:11, but never released as a single. In 2019, a portion of the song was picked up for a regional campaign in Nashville and surrounding markets by Ascension Saint Thomas Hospital. After an overwhelmingly positive reaction from the area, it is now being used in television and radio commercials across the country, soaring Lang’s popularity to new heights.

Here’s a link to Ascension Hospitals National ‘Your Care Is Our Calling’ 60-second ad.

Lang recently released Old Soul an album featuring 14 covers of critically acclaimed songs that highlight Lang’s love and appreciation for the timeless classics on September 18. Surviving the tests of time, these serendipitous spins on popular hits of the 60’s – the 90’s brush the dust off of a time capsule to uncover the feel-good intent of simpler times. Old Soul dances onto the scene with unrivaled grace and distinctive dynamic, transporting listeners back to music’s greatest era. Sponsored by Springer Mountain Farms Chicken, Old Soul is available to download and stream on all digital platforms.

As an artist, Lang has released several albums including 11:11, Shades of K, Throwback, Obsession, and Iconic Duets with her husband, T.G. Sheppard. In the spring of 2020, Lang re-released her classic children’s album Lullaby Country, which was originally sold at Cracker Barrel.

While being interviewed by Governor Mike Huckabee about her career in country music and her album, ‘Old Soul’ which was released on September 18th, 2020, Governor Huckabee surprised Lang with a trophy signifying a special induction into the Oklahoma Music Hall of Fame.