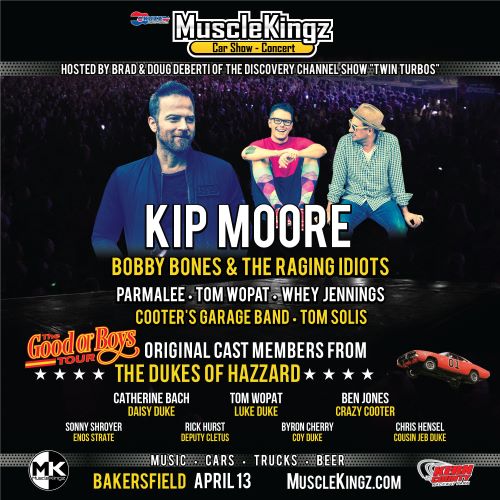 “This event is going to be the biggest party in Bakersfield.’ says Brad DeBerti, ‘Kip Moore, Bobby Bones and The Raging Idiots, Parmalee, amazing cars and trucks, and the cast of The Dukes of Hazzard? This is going to be epic!”

The MuscleKingz Car Show & Concert will be hosted by Brad Deberti, who was born and raised in Bakersfield, and co hosted by his father Doug Deberti who together entertain fans on their Discovery Channel TV show ‘Twin Turbos’. They build outrageous state-of-the-art cars and trucks and each have won multiple SEMA Best of Show Awards. Brad is currently NASCAR’s State Rookie of the Year.

The Good Ol’ Boys Tour will make a pit-stop at the MuscleKingz Car Show & Concert to celebrate the 40th Anniversary of The Dukes of Hazzard featuring Hazzard County’s famous stars – Catherine Bach (Daisy Duke), Tom Wopat (Luke Duke), Ben Jones (Cooter Davenport), Sonny Shroyer (Enos Strate), Rick Hurst (Deputy Cletus), Byron Cherry (Coy Duke), Chris Hensel (Jeb Duke), and – as well as one of the legendary 1969 Dodge Chargers – “General Lee” – owned by Chrome Cars and used in the original filming of the Dukes of Hazzard TV series. Fans can get autographs and photos with the cast and photos with the General Lee.

“Country Music, American Muscle Cars, Custom Trucks plus the cast from The Dukes of Hazzard!” exclaims John Oakes – Freeze Management CEO, MuscleKingz co-founder and co-producer. “We make an effort to add value to those who spend their hard earned money to attend our events with memorable experiences. April 13 in Bakersfield will be a good time you will not forget!”

To register your car or truck, get your tickets and all information about the Muscle Kingz Car Show & Concert at the Kern County Raceway on Saturday, April 13, visit www.MuscleKingz.com.

About MuscleKingz:
MuscleKingz is a brand and social media powerhouse featuring both modern and classic American muscle cars with over 1.6 million followers on Facebook, 450k+ on Instagram and thousands of attendees at each car show and concert series. Partnering with the automotive industry’s most respected brands, MuscleKingz produces the Car Show and Concert Series with a modern twist to a classic culture. www.MuscleKingz.com

About Kip Moore:
Kip Moore’s current Top 20 single “Last Shot” is the second taken from his revered third studio album SLOWHEART and follows his fourth No. One hit “More Girls Like You.” “SLOWHEART,” garnered instant praise from critics as Moore’s “most complete, cohesive declaration of his artistic sensibilities yet” (NPR,) as well landing on multiple “Best Of” lists including Entertainment Weekly, Rolling Stone, UpRoxx, Bobby Bones Show, Taste Of Country, Sounds Like Nashville, The Boot, PopMatters and Whiskey Riff. SLOWHEART follows the acclaim that surrounded Moore’s sophomore album WILD ONES heralded as “an impressively singular release from Music Row” by The Guardian and his PLATINUM debut album UP ALL NIGHT that spawned three No. One hit singles, including GOLD certified “Beer Money,” PLATINUM certified “Hey Pretty Girl,” and the DOUBLE PLATINUM breakout hit “Somethin’ ‘Bout A Truck. For more information, visit kipmoore.net.Songs: Last Shot, More Girls Like You, Beer Money, Somethin’ ‘Bout a Truck

About Bobby Bones:
Born and raised in Arkansas, Bobby started his radio career at Henderson State University. Since then he has been on the fast track to success. Currently based in Nashville, Bobby is a local celebrity hosting an afternoon show on the music station, ME TV, as well as contributing to several local news mediums and organizations such as the Big Brothers and Sisters volunteer program and St. Jude Children’s Research Hospital. Bobby’s hardworking, sensitive and semi-neurotic personality fuel the show. His natural ability to relate to a wide range of listeners and his uncanny knack for coffee talk makes him a tough match for any morning show competitor. The mediator between Lunchbox and Amy, Bobby is the voice of reason and the glue that binds the unpredictable cast. A germaphobic over-achiever at heart, Bobby wins people over by exposing his biggest weaknesses to the audience. With daily tales of life, love, passion and therapy, Bobby connects with the listeners and bears his soul on air every morning.

About Doug and Brad Deberti:
For father-son duo Doug and Brad DeBerti, custom car building isn’t just a hobby, it’s their life. From creating a truck modeled after a fighter jet to developing the first ever drift racing truck, the DeBerti’s have been building one-of-a-kind cars and trucks for more than two decades, winning over twenty awards, and turning the family business into a household name. Watch them on Discovery Channel’s TV show TWIN TURBOS creating outrageous, state-of-the-art builds – pushing the boundaries being featured SEMA, the largest car event in the world! See them host the MuscleKingz Car Show & Concert on April 13 at the Kern County Raceway. Brad will be exhibiting and showcasing his favorite builds for all to see and enjoy the true craftsmanship and fabrication they took to create! For more information, visit deberti.com.