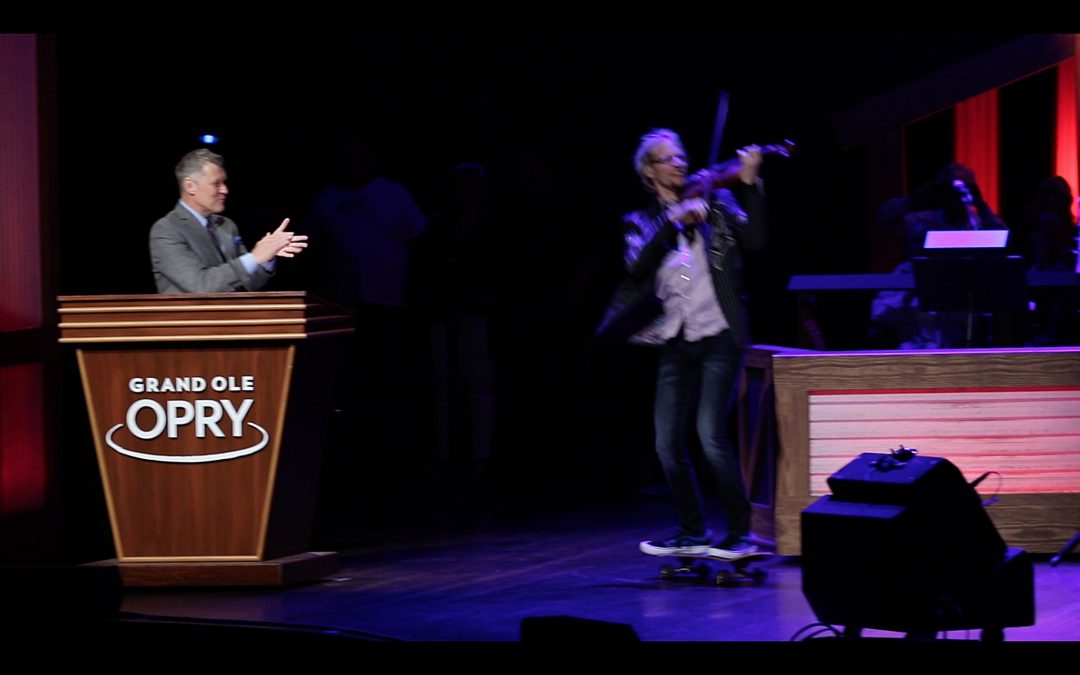 “Kyle Dillingham has made Opry history. His debut tonight, and the first ever to enter and exit on a skateboard. It is my thought that the fiddler blew the roof off the Grand Ole Opry house tonight!”
– Bill Cody, Grand Ole Opry Announcer/Host

“On Wednesday night, the Grand Ole Opry was electrified with the first appearance of Kyle Dillingham. He skated his way on stage and fiddled his way into the hearts of a sold out crowd that wound up on their feet! Congratulations, Kyle, you set this place on fire!”
– Duane Allen, The Oak Ridge Boys

Plus, Dillingham proposes to girlfriend backstage after Opry debut

NASHVILLE, Tenn. – Kyle Dillingham, the skateboarding, fiddling phenom once again cemented his status to be referred to as such, during his Grand Ole Opry debut on Wednesday, July 24. The classically-trained maestro from Oklahoma claimed his own unique part of Opry history by becoming the first guest artist to ride his skateboard onto Country music’s biggest stage. Spinning to a perfect 360 degree stop inside the circle, with his fiddle in one hand and hoisting his skateboard into the air with other, Dillingham revealed an image of Dolly Parton on the board’s opposite side to the Opry crowd. Met with favorable applause, Dillingham and his Horseshoe Road band mates, Peter Markes and Brent Saulsbury, immediately belted into their rendition of Albert Brumley’s “I’ll Fly Away.” Closing out his two song set before skating offstage, Dillingham flexed his classically-trained music muscle with a performance of the classic Russian romance “Ochi Chyornye (Dark eyes),” paying tribute to the historic tours to Soviet Russia in the 70s and 80s by Roy Clark and The Oak Ridge Boys.

“For my whole life, my two passions were fiddling and skateboarding!” said Dillingham. “Never in my life did I ever imagine that they would come together and make history on the most sacred stage in country music! I am so proud to now be a part of the Opry story. How awesome to share this incredible moment with my band mates, Peter Markes and Brent Saulsbury, and to be surrounded by family and dear friends backstage!”

Dillingham Gets Engaged Backstage After Opry Debut
After Kyle’s one-of-a-kind Opry debut, he returned to his backstage dressing room where he was surrounded by friends, family and his band mates. While thanking everyone in the room for their contribution and support for his career, he turned to his girlfriend Ginnette Tavzel, bended down on one knee and popped the question. She tearfully embraced Kyle and said “yes,” as everyone around cheered and applauded.

“As if an Opry Debut was not enough excitement for one night, I also took the moment backstage to ask my girlfriend, Ginny, to be my wife! “Into the Circle” (dressing room number 4) was transformational for me personally and professionally. Both of these moments will have an enormous impact on the rest of my life, and I am so grateful that I will have somebody so wonderful to share the journey with me!”

About Kyle Dillingham:
Kyle Dillingham picked up the violin when he was nine, and eight years later, he gave two featured performances at the Grand Ole Opry in Nashville. Kyle is now managed by legendary impresario, Jim Halsey, who has guided the careers of many great performers including Roy Clark, The Oak Ridge Boys and James Brown. Between Dillingham’s touching songwriting, classic covers and fiddlin’ favorites, he is sure to have audiences on their feet. Dillingham has represented America internationally in 40 countries, and is the youngest ever recipient of the distinguished Oklahoma Governor’s Arts Award, thus earning him the title of “Oklahoma’’s Musical Ambassador.” He’s also performed for many governmental leaders including the Japanese, Thai and Saudi Arabian Ambassadors to the United States. Through his musical diplomacy, Dillingham has serenaded the King of Malaysia, the Princess of Thailand, and performed during Singapore’s National Day Celebration. His performance at the Beijing Central Conservatory was broadcast on Chinese national television.