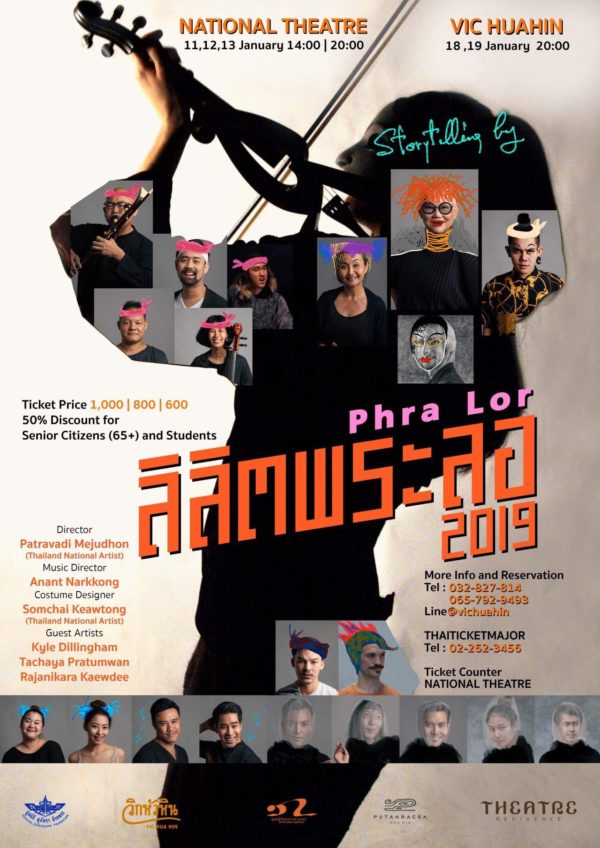 Dillingham reflects on the 10 year anniversary of his 2009 performance in Phra Lor with famed Thai director and actress, Patravadi Mejudhon

“This is an incredible US diplomacy opportunity for me,” said Dillingham. “It’s a powerful experience for a Thai audience to witness an American performing all the beautiful and beloved classic Thai music.”

Lilit Phra Lor is regarded as one of the earliest works in Thai literature that depicts the tragedy of love, and the truth of life through beautiful poetic prose. In 1983, famed Thai Director and Actress, Patravadi Mejudhon, first adapted the poem into a stage drama. Then, in 2009, she revisited this literature again, but in the style of a contemporary musical play. The contemporary drama had ancient verse combined with new melodies and made the literature easy-to understand and fresh.

Dillingham first met Patravadi Mejudhon in 2008 while he was on tour in Thailand, sponsored by the U.S. Embassy in Bangkok. After giving her a spirited performance with his famous fiddle, Mejudhon invited Dillingham to star in her 2009 production of Phra Lor, which was supported by the King and to be premiered for the princess of Thailand. The Bangkok Post raved about the performance, saying that “Dillingham can bewitch and conjure a range of emotions from his violin… The music becomes the most intriguing and seductive aspect of the production.”

“She told me that she had been looking for a violinist for about a year and had auditioned all the violinists in her country but could not find anybody to do what she was envisioning for the role,” said Dillingham.”She was just about to give up when we met!”

Now, in 2019, Lilit Phra Lor has once again been recreated in the style of poetry reading in both the Thai and English languages. Directed and performed again by Patravadi Mejudhon, the production will also include professional and international artists such as Keng – Tachaya Pratumwan, Leng – Rajanikara Kaewdee, and music composer Anant Narkkong. The costume designer is Somchai Kaewtong, the National Artist of Visual Arts (Fashion Design) in 2017.

“After becoming close friends, Patravadi confided in me that she never intended on using me in the show,” Dillingham admits. “She had imagined me developing the role and eventually using a Thai violinist in my place. But once the role was developed, she couldn’t find anybody to do what I had created. So now 10 years later…here I go again!”

About Kyle Dillingham:
Kyle Dillingham picked up the violin when he was nine, and eight years later, he gave two featured performances at the Grand Ole Opry in Nashville. Kyle is now managed by legendary impresario, Jim Halsey, who has guided the careers of many great performers including Roy Clark, The Oak Ridge Boys and James Brown. Between Dillingham’s touching songwriting, classic covers and fiddlin favorites, he is sure to have audiences on their feet. Dillingham has represented America internationally in 37 countries and is the youngest ever recipient of the distinguished Oklahoma Governor’s Arts Award.