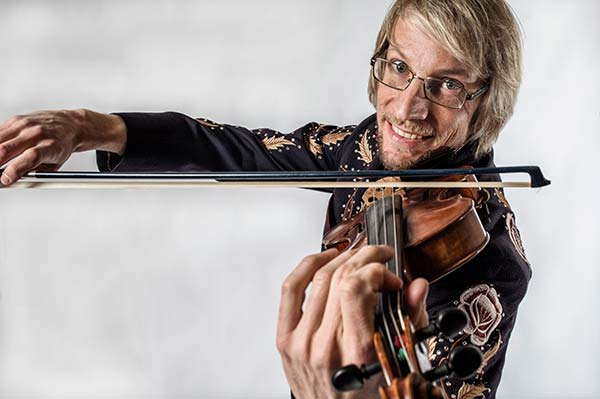 Dillingham will be one of only fifteen participants, selected from a pool of over 300 artists by the U.S. Department of State sanctioned program

NASHVILLE, Tenn. – Americana fiddle maestro Kyle Dillingham is excited to announce he will be embarking on the 2018-2019 American Music Abroad tour, March 24 to April 9, venturing through Kuwait and the Republic of Kosovo. The globe-trotting Oklahoman musician was selected from a pool of over 300 artists, and will be one of only 15 participants in the annual program. Dillingham, along with his Horseshoe Road band-mates, will once again take his musical diplomacy overseas, raising the total number of international countries he’s performed in to 39. The tour is organized by The Association of American Voices, and is sponsored by The U.S. Department of State’s Bureau of Educational and Cultural Affairs.

“Growing up in rural Oklahoma, I never imagined that I would ever have a chance to travel out of the country, but now I have these incredible opportunities to share my music and change lives all over the world – all while representing this great country we call The United States of America. What a humbling honor. This is now the second time I have been selected for AMA, and the sixth time I have officially represented the United States through government funded touring programs.”

The American Music Abroad program is designed to communicate America’s rich musical history as it fosters cross-cultural communication and people-to-people connection to global audiences. In cooperation with the U.S. Department of State, American Voices has arranged for Kyle Dillingham, a series of 2-week, multi-country cultural exchange programs in Kuwait and the Republic of Kosovo. This will include Dillingham giving public concerts, interactive performances with local traditional musicians, lecture demonstrations, workshops, jam sessions, and media interviews.

“Besides all of the important public cultural programming, I’m very excited to be providing entertainment for US Embassy Kuwait’s official US Independence Day Celebration (happening in March because it’s just too darn hot in July!). Also really looking forward to being a part of a concert in Kosovo celebrating International Roma Day. Believe it or not, but even “The Devil Went Down to Georgia” has been influenced by Roma culture and music!”

Photojournalist Luis Cáceres Álvarez recently recounted a meeting with Dillingham, while in Lima, Peru, in a recent feature for BBC News Mundo. (Click here to read)

Kyle “played for the first time Peruvian music between guitars, drawers, Czech and donkey jaw in La Catedral del Criollismo de Breña,” Luis explained. Kyle does not master Spanish very well, “but he spoke that universal language that is music.”

“I believe that Music diplomacy is very important in our world today. And as I always say, we will be doing the best to do our part. Music changes lives; music changes everything; and it only takes a little.”

About Kyle Dillingham:
Kyle Dillingham picked up the violin when he was nine, and eight years later, he gave two featured performances at the Grand Ole Opry in Nashville. Kyle is now managed by legendary impresario, Jim Halsey, who has guided the careers of many great performers including Roy Clark, The Oak Ridge Boys and James Brown. Between Dillingham’s touching songwriting, classic covers and fiddlin’ favorites, he is sure to have audiences on their feet. Dillingham has represented America internationally in 37 countries and is the youngest ever recipient of the distinguished Oklahoma Governor’s Arts Award, thus earning him the title of “Oklahoma’s Musical Ambassador.” He’s also performed for many governmental leaders including the Japanese, Thai and Saudi Arabian Ambassadors to the United States. Through his musical diplomacy, Dillingham has serenaded the King of Malaysia, the Princess of Thailand, and performed during Singapore’s National Day Celebration. His performance at the Beijing Central Conservatory was broadcast on Chinese national television.