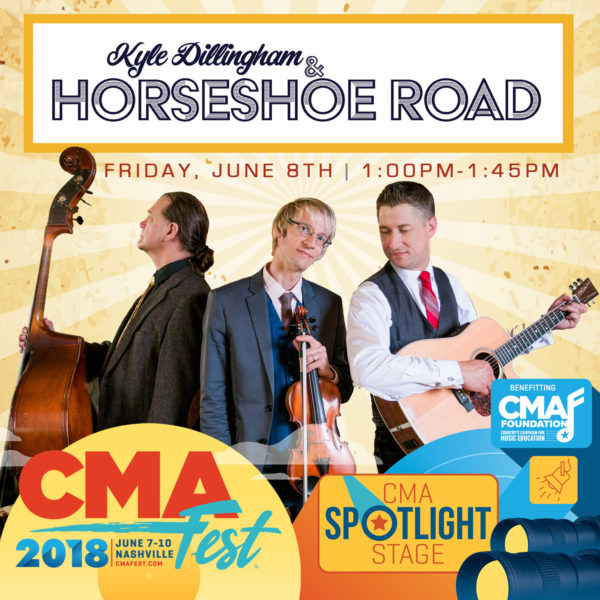 NASHVILLE, Tenn. – Kyle Dillingham is excited to announce that he’ll be making his 2018 CMA Fest debut on the Spotlight Stage inside Music City Center. Dillingham will perform at 1:00 pm CT on June 8, followed by a 30 minute fan meet-and-greet immediately after his performance.

“How very exciting it is to be a new member of this CMA family! An important theme in education is, ‘it’s not what we have, but it’s what we give,’ and we look forward to giving our very best at CMA Fest this year to benefit the CMA foundation’s work enriching music education programs all across the country,” Dillingham commented.

Dillingham is also celebrating a recent invitation to participate in the 2018-2019 American Music Abroad tour season, organized by The U.S. Department of State’s Bureau of Educational and Cultural Affairs, and The Association of American Voices. Dillingham and Horseshoe Road were chosen as one of fifteen ensembles, standing out in an applicant pool of nearly 300.

“We are so excited to announce that we have also been accepted to participate in the 2018-2019 American Music Abroad (AMA) tour season! Having already performed in 37 countries, I look forward to this opportunity to take country music, once again, to new frontiers,” Dillingham said. “Whether at home or abroad, we have an important opportunity everyday to change peoples lives with our music. That’s what we are really talking about here!”

The Bureau of Educational and Cultural Affairs is currently working to select the 40+ touring countries for the upcoming round of American Music Abroad, which will be announced at a later date.

Additionally, Kyle Dillingham recently recorded a performance on Woodsongs Old-Time Radio Hour, which is set to air on June 23 via the program’s broadcast affiliates, and the American Forces Radio Network. WoodSongs Old-Time Radio Hour is both a radio and television production that airs internationally around the world, and fosters the comradery of both musicians and music lovers to celebrate the traditional American experience through song. Producer and host, Michael Johnathon has garnered mass multi-media attention over the past 15 years, which is filmed in front of a live audience in Lexington, Kentucky.

About Kyle Dillingham:
Kyle Dillingham picked up the violin when he was nine, and eight years later, he gave two featured performances at the Grand Ole Opry in Nashville. Kyle is now managed by legendary impresario, Jim Halsey, who has guided the careers of many great performers including Roy Clark, The Oak Ridge Boys and James Brown. On stage, Horseshoe Road performs a mix of band originals, classic covers and fiddlin favorites that are sure to have audiences on their feet. Together, they have represented America internationally in 37 countries, energizing audiences everywhere they go.

Suggested Tweet:
YOU HEARD IT HERE FIRST! @KyleDillingham performing at @CountryMusic’s #CMAfest in support of the @CMAFoundation & music education! Catch him on the Spotlight Stage at 1pm on June 8 at Music City Center. #itstartswithME