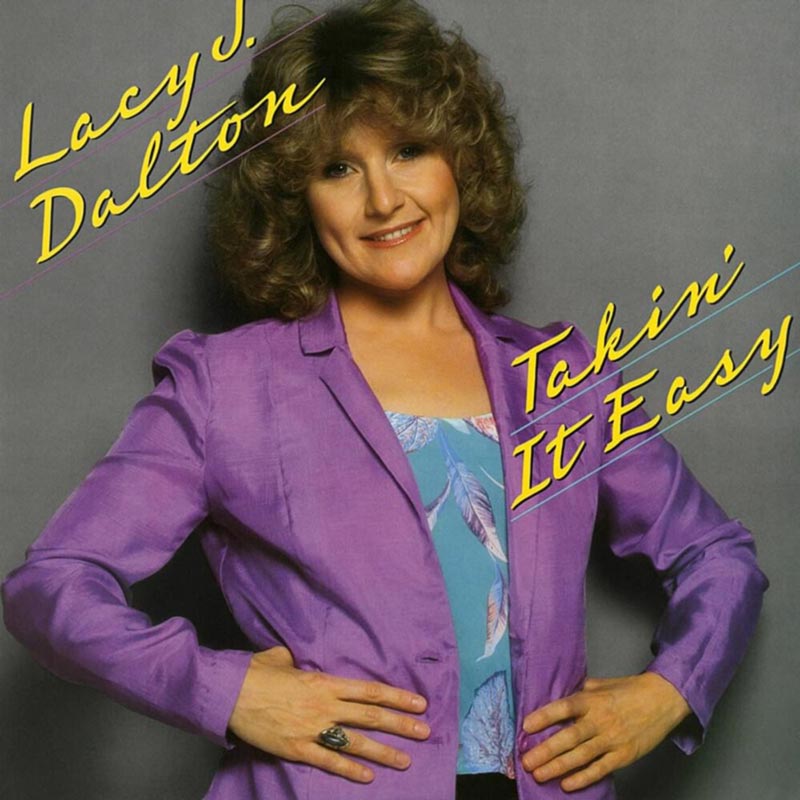 “Takin’ It Easy” released in 1981 remains a fan favorite

NASHVILLE, Tenn – Country hit-maker Lacy J. Dalton celebrates the 40th anniversary of her album and hit title track “Takin’ It Easy,” which was released in July of 1981. Co-written by Dalton, Mark Sherill, and Billy Sherill, the song was the highest-charting single of Dalton’s career, having reached number 2 on Billboard Hot Country Singles & Tracks chart and received a Million Airplay Award from BMI. Perfectly fitting for the easygoing tune, the vision for “Takin’ It Easy” came to life by Dalton and Mark while on a boat in the middle of Old Hickory Lake near Nashville, before being taken to Billy for production. Once released, it became one of Dalton’s most well-known songs to date. Other chart-toppers off “Takin’ It Easy” include fan favorites, “Everybody Makes Mistakes” and “Wild Turkey.”

“My ol’ buddy and writing partner, Mark Sherrill had the idea for this fun song. His big dream at the time was to have a bait and tackle shop and fishing boat business……real laid back, sorta Jimmy Buffet style,” shares Dalton. “He and I wrote on it for a few days, and then took it in to show it to my producer and his uncle, the great Billy Sherrill. Billy got all excited by it but sent us back to the drawing board. We worked on it some more, and then he decided to write with us, which was just a blast! We had a ball writing together, and the song turned out to be a pretty big record. It never would have happened though without Mark Sherrill’s original vision of wanting to go where the warm winds blow and just taking it easy in some tropical paradise.”

Dalton continues to please fans with her music from both her past and present. She will be performing at “A Hot Night in August” at the Piper’s Opera House on August 27 in Virginia City, NV. The show will support the country legend’s ‘Let ’em Run’ Foundation, a volunteer organization dedicated to preserving, recovering, and providing sanctuary and homes for America’s wild horses and burros. A mission that she holds dear to her heart, this will be the second fundraiser since the pandemic to help assist the organization as a songwriter “round” style show. Dalton will be joined by the Western Music Association songwriter of the year nominee, David John, to entertain the crowd with their original songs.

For more information about ‘A Hot Night In August’ and tickets visit HERE.

About Lacy J. Dalton:
First hitting the Country Top-20 in 1979 with “Crazy Blue Eyes,” Dalton was one of the most successful female vocalists of the format during the 80s with the CMA-nominated anthem “16th Avenue,” as well as hits like “Takin’ It Easy,” “Everybody Makes Mistakes,” “Hillbilly Girl With The Blues,” and “Black Coffee.” During her career, she has collaborated with such Country Music Hall of Fame members as Bobby Bare, Glen Campbell, Willie Nelson, and George Jones. She toured with outlaws like Hank Williams Jr. at a time when it was very unusual for a woman to do so. She also toured for a long period of time with Willie Nelson and was the only female on his ‘Half Nelson’ album, which also included duets with Ray Charles, Merle Haggard, Carlos Santana, Neil Young, and more. The album went Platinum and Lacy received a gold record for her contribution.

Her most recent recorded work is the four-song EP ‘Scarecrow’ which is now available on all streaming music sites. Dalton is a 2017 inductee of the North American Country Music Association International Hall of Fame.