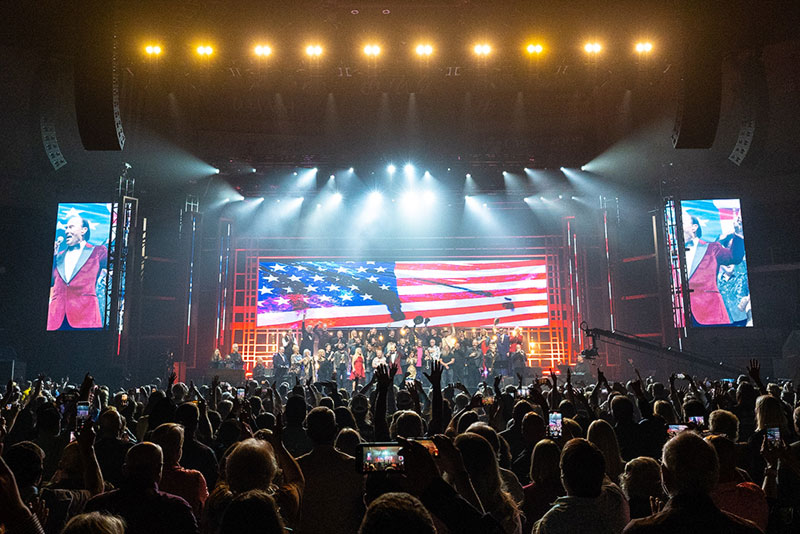 “When Lee Greenwood announced that he wanted to host his All-Star Salute tribute concert in the Von Braun Center Propst Arena, we were ecstatic!,” said Von Braun Center Director of Marketing and Public Relations Samantha Nielsen. “We knew the event would be hugely successful – not just for the VBC, but for the entire city of Huntsville and North Alabama.  We can proudly say that this sold-out concert was the third highest-grossing event ever held in the VBC’s 46-year history! On the night of the concert, multiple hotels in Huntsville sold out due to the number of out-of-market attendees the show drew in helping create an economic impact of over $1 million for the city of Huntsville. The best news? The show isn’t over, yet! We will continue seeing benefits from hosting this event in Huntsville because there are still three 1-hour television specials from the Lee Greenwood tribute concert that will be aired nationally in 2022. Each special will promote tourism in Huntsville, Alabama. Our VBC team showcased what our facility can accomplish, and we’re thrilled to contribute to the continued growth and recognition of the city of Huntsville and the state of Alabama.”

“Lee Greenwood chose Alabama as the place he wanted to celebrate his life of being, first, an American Patriot and, second, a music star. He also brought a star-studded event to Huntsville to commemorate and support our Veterans by giving out houses through the Helping A Hero organization. I love him for this, and this is great for Alabama and the impact on our economy,” says Perry Hooper, Chairman of the All-Star Salute to Lee Greenwood Celebration. “This is a tribute to Alabama and how much we respect and salute him for what he means for America in these troubling times when being a patriot like Lee is being marginalized. I cannot be prouder for being a fan of his music and his career and what he did for coming to Alabama for this great celebration.”

In addition to great music celebrated on stage, Louis and Patti Breland of Breland Homes bestowed keys to two veterans and their families – SFC Scott Barkelow, USA (Ret) and SSG Michael Brown, USA – through a special partnership with Lee Greenwood and the Helping a Hero organization.  “We met Lee Greenwood and committed to donating a home to a veteran for this event and were super excited to be part of this celebration. Then we saw two different veterans from Alabama that were so deserving that we couldn’t choose one over the other, so we just decided to honor them both,” said Louis Breland of Breland Homes. “The event was the highlight of our year. It was an emotional evening all around. Words just can’t describe what we were feeling or what everyone in that arena was feeling. There was so much love for Lee Greenwood, America and you could just feel the emotion,” adds Patti Breland.

“When we first heard about this event, we knew that we had to be a part of it. It was about America, our veterans, and Lee Greenwood! So for the festivities, we had to do what we do best, which is make guns. Although we can never truly repay the, it was our honor to present a few of our Henry Military Service Tribute Edition rifles to some truly inspiring local veterans as a small token of our gratitude,” says Andy Wickstrom. “Lee Greenwood is an inspiration for us all in making sure we do not forget our veterans. His song ‘God Bless The USA’ will live on forever and his continued patriotism is unparalleled.”

ABC Supply Company presents An All-Star Salute to Lee Greenwood was promoted by Mike Smardak of Outback Presents and produced by Lee Greenwood, Inc. Perry Hooper served as Chairman of the VIP dinner/meet & greet event the night before the concert event. Edgar Struble served as the Music Director.