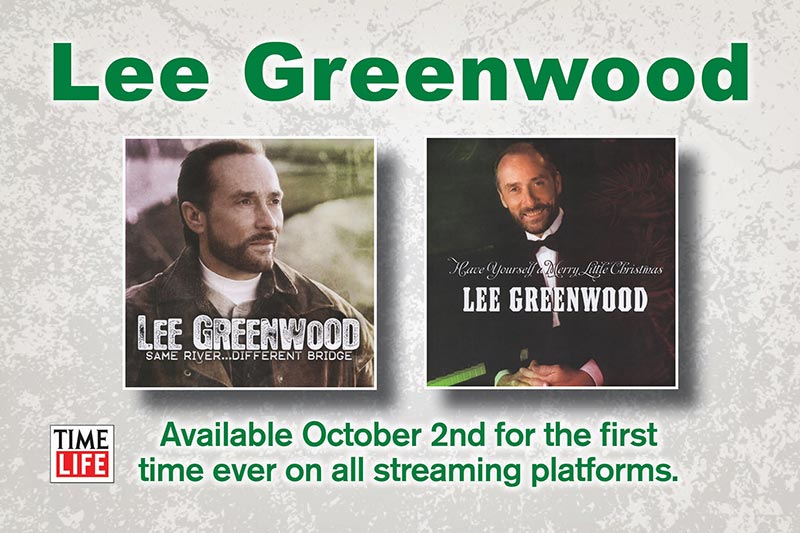 Greenwood’s ‘Same River, Different Bridge’ and ‘Have Yourself A Merry Little Christmas’ now released digitally to all platforms

NASHVILLE, Tenn. – Throughout his expansive career, international country music icon Lee Greenwood has earned multiple CMA and ACM Awards, a Grammy Award for Top Male Vocal Performance, and a multitude of other prestigious award nominations. Now, in 2020, recordings that have been previously unavailable on any digital platform will soon be released through a new recording and distribution agreement with Time Life, which is distributed through Warner Music Group.

Lee’s ‘Same River, Different Bridge’ and ‘Have Yourself A Merry Little Christmas’ will be released digitally to all platforms on October 2, 2020 for the first time ever. Fans of all ages will now have the opportunity to stream the classic hits that shaped American music.

“The music I’ve recorded over the last 40 years has always been exciting,” says Greenwood. “We’ve always chosen songs that have quality and depth in the lyrics. The arrangements are generally constructed in the studio with some of Nashville’s finest musicians that I’ve worked with for years. The outcome is always predictable. I am excited with further association with Time Life in releasing these next few albums that define what I believe to be great music.”

“Lee Greenwood has been part of the Time Life and StarVista LIVE family for a couple of years now, and we’re really excited about sharing these albums digitally,” says Mike Jason, Senior Vice President, Live Entertainment. “We feel honored to be able to further share the music that helped to define American culture with fans of Greenwood, as well as countless others.”

Most Americans know Lee Greenwood for his patriotic anthem, “God Bless The USA,” which has been performed countless times for multiple Presidents of the United States. However, Greenwood’s collection of hits, including singles from his album, ‘Same River, Different Bridge’ remain on playlists of many country radio stations today. ‘Have Yourself A Merry Little Christmas’ features classic covers of Christmas hits including “Let It Snow,” “Santa Claus is Coming to Town,” and many more feel-good seasonal anthems. Fans will not want to miss this first-of-its-kind release!

To keep up with everything Lee Greenwood visit leegreenwood.com.

About Lee Greenwood:
Throughout his expansive career, international country music icon Lee Greenwood has earned multiple CMA and ACM Awards, a Grammy Award for Top Male Vocal Performance on “I.O.U,” in 1985, and a multitude of other prestigious award nominations. His discography includes twenty-two studio albums, seven compilation albums, seven No. 1 hits and thirty-eight singles including songs like “It Turns Me Inside Out,” “Ring On Her Finger Time on Her Hands,” “She’s Lyin’,” “I Don’t Mind the Thorns if You’re the Rose,” “Dixie Road,” “Somebody’s Gonna Love You,” “Going Going Gone,” “You Got A Good Love Comin’,” among others.

His stand-out hit “God Bless the U.S.A.” has been in the top five on the country singles charts three times (1991, 2001 and 2003), giving it the distinction of being the only song in any genre of music to achieve that feat. It reached the Top 20 of the Billboard Hot 100 chart shortly after 9/11. Known for his patriotism and support of the U.S. Military, Greenwood has been honored with the Congressional Medal of Honor Society’s National Patriot’s Award and entertained troops on more than 30 USO Tours. Greenwood was appointed to the council of the National Endowment for the Arts in 2008 by President George W. Bush, confirmed by the United States Senate, and continues to serve on the NEA at the pleasure of the President. His latest book release is a children’s book called Proud To Be An American, which is currently available in stores, on Amazon and leegreenwood.com.

Suggested Tweet:
.@TheLeeGreenwood partners with @TimeLife to release #SameRiverDifferentBridge and #HaveYourselfAMerryLittleChristmas on all #digital platforms for the first time on October 2