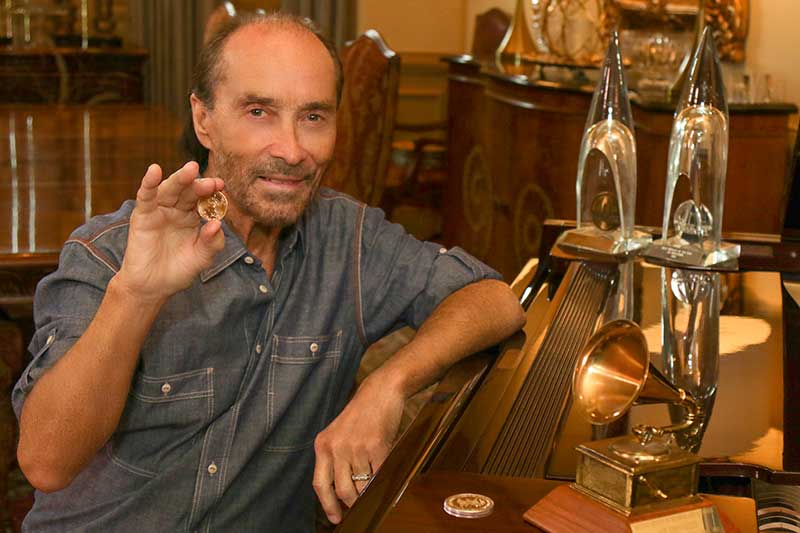 America’s Gold Expert has enlisted the help of America’s Patriot to inform the public about the value in gold, silver and rare coins

BEAUMONT, Texas – Lee Greenwood, “America’s Patriot,” has joined forces with America’s Gold Expert, Universal Coin & Bullion, at a time when the value of gold and silver precious metals are hitting historic highs. This exclusive partnership marks the first time Greenwood has worked with a company that sells gold and silver directly to consumers.

“The American dollar for decades was backed by gold and like most Americans, the value of our dollar means something to me,” says Greenwood. “Knowing the value of our precious metals continue to rise, I am honored to be working with Universal Coin & Bullion in making sure people know where they can get beautiful silver and gold coins as well as pure bars.”

Lee Greenwood is a Grammy award winner, a CMA award winner, an ACM award winner, and a Presidential appointee to the National Endowment for the Arts. His catalog of hits includes over 20 top ten singles and seven number one songs. Greenwood is known for his patriotic anthem “God Bless The USA,” which has been performed countless times for eight different Presidents over five decades.

Dr. Mike Fuljenz, known as America’s Gold Expert and President of Universal Coin & Bullion, was thrilled to partner with Greenwood.

“I’ve always admired Lee Greenwood,” says Fuljenz. “He connects with his fans as he travels our great country. I was pleased to meet him at a charity event in Texas on September 11th and as a company, we are even more honored to be working with such a music legend.”

Like Greenwood, Dr. Fuljenz is recognized as an industry leader, having won more than 60 prestigious national and regional awards for his consumer education and protection work in rare coins and precious metals. He is a frequent expert guest on local and national business and personal finance programs, such as Fox Business Network and CNBC, and has been quoted in The Wall Street Journal, Kiplinger’s, Los Angeles Times, and other broadcast, print, and online news media.

Fans and consumers can learn more about this partnership – and how to invest in precious metals and rare gold and silver coins, by visiting Lee Greenwood’s website and Universal Coin and Bullion’s website.

His stand-out hit “God Bless the U.S.A.” has been in the top five on the country singles charts three times (1991, 2001 and 2003), giving it the distinction of being the only song in any genre of music to achieve that feat. It reached the Top 20 of the Billboard Hot 100 chart shortly after 9/11. Known for his patriotism and support of the U.S. Military, Greenwood has been honored with the Congressional Medal of Honor Society’s National Patriot’s Award and entertained troops on more than 30 USO Tours. Greenwood was appointed to the council of the National Endowment for the Arts in 2008 by President George W. Bush, confirmed by the United States Senate, and continues to serve on the NEA at the pleasure of the President. His latest book release is a children’s book called Proud To Be An American, which is currently available in stores, on Amazon and leegreenwood.com.

His books, media appearances, and newsletters about gold and rare coins have earned Best of the Year awards from the Numismatic Literary Guild and the Press Club of Southeast Texas, and he received the NLG’s coveted top lifetime achievement honor in 2013, “The Clemy Award.” Dr. Fuljenz has been an expert guest on many nationally recognized publications and finance programs, having made contributions on Fox Business Network, CNBC, the Wall Street Journal, Forbes, Kiplinger’s, and many others.

A respected community leader in his hometown of Beaumont, Texas, Fuljenz is a Past President of the Diocese of Beaumont Catholic School Board and received the Catholic Charities Humanitarian of the Year Award. He has been recognized for his support of childhood literacy with top awards from the Beaumont Independent School District and from Save Our Children. He has served with distinction as a consultant to the Federal Trade Commission, U.S. Postal Service, General Services Administration, United States Mint, and Royal Canadian Mint, and is on the Boards of Directors of Crime Stoppers of Beaumont and the influential Industry Council For Tangible Assets.