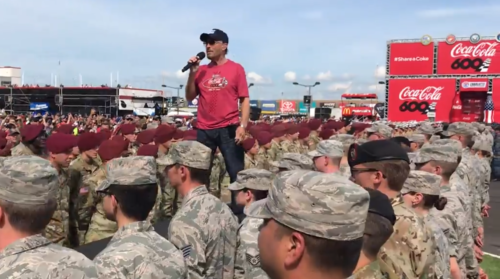 “I’m blessed and honored to have the opportunity to pay tribute to the men and women of our great nation who serve and sacrifice daily to defend our freedom,” said Greenwood.

Tim Atwood‘s forthcoming solo album, Livin The Dream, features the patriotic anthem, “I’ll Stand Up and Say So” which has an equally patriotic story behind it.

In 2017, shortly after performing “I’ll Stand Up and Say So” at one his shows, Tim was gifted a memorial bracelet by an endearing fan. The bracelet was in honorarium of Capt. William D. Grimm, a U.S. Airman who was killed in action during Operation Desert Storm in Iraq. The fan had worn the bracelet continuously for 26 years, and confided that she wanted to pass the bracelet along to Tim to keep Capt. Grimm’s memory alive. Through tear-filled eyes, she told Tim, “It’s time I share this bracelet with you…and it’s time you share Capt. Grimm’s memory with the world.”

“I haven’t taken this bracelet off since I received it,” said Atwood. “Our son served two tours in Iraq in the U.S. Army and came home a Purple Heart Veteran–injured during service. It is by the grace of God that he returned home alive. When I look down at this Memorial bracelet, I am reminded at how close my son came to losing his own life in combat. We owe everything to the men and women who paid the ultimate sacrifice to ensure our freedoms. Thank you–two little words, but they speak volumes.”

Patrick James Band is also readying his debut solo album, Ride Of A Lifetime, with the first single from the project – the inspiring “Thank You.” Patrick says it’s a song of gratitude for everyone in uniform who has fought to protect our freedoms. He just wanted to thank them personally with a song.

“I always wanted to write something to thank them for what they do; fighting for our freedoms we enjoy. You know, you and I are sitting here today because a lot of people lost their lives for it,” Patrick explains. “To live in the country that we live in, to be able to express ourselves, to be able to live our dreams, that came with a heavy price. I wanted to write a song to all the military and first responders who fight and protect our freedom. Thank you!”