Lee Greenwood To Celebrate 40 Years Of Hits With An All-Star Celebration On October 12, 2021 At The Von Braun Center In Huntsville, Alabama 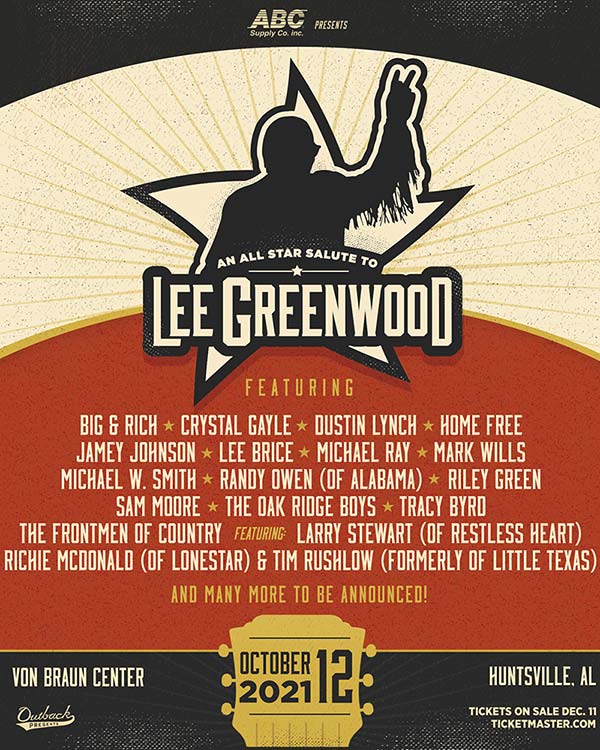 Huntsville, Ala. – Award-winning recording artist Lee Greenwood is being rightfully honored for his significant contribution to the music industry with an all-star salute celebration which will encompass his 40 years of hits. This exclusive event features special guest appearances from a few of Greenwood’s friends including well-known artists Riley Green, Michael W. Smith, Lee Brice, Dustin Lynch, Michael Ray, Jamey Johnson, Big & Rich, Randy Owen (of Alabama), Home Free, Sam Moore, Tracy Byrd, The Oak Ridge Boys, Crystal Gayle, Mark Wills, The Frontmen of Country and more to be announced. The celebration is yet another marker in the illustrious career of Lee Greenwood, commemorating years of success in the music and entertainment industry. The event will take place on Tuesday, October 12, 2021, at the Von Braun Center in Huntsville Alabama.

“With this crazy year we have had to endure, I am really excited to be celebrating in 2021!” says Lee Greenwood. “I have been part of so many of these tribute concert events and they are literally like a family reunion with everyone hanging backstage telling their favorite stories from the road or studio. You know, when you get in the music business you just hope for success. I can’t believe I have actually been having hits for 40 years. I never knew so many of my songs had influenced so many of these great artists that are joining me for this celebration. It’s going to be spectacular, something that Huntsville has never seen before!”

Tickets for the event will be available for presale on Wednesday, December 9 at 10:00 am CST until Thursday, December 10 at 10:00 pm CST, and tickets will go on sale to the public Friday, December 11 at 10:00 am CST. A variety of ticket prices are available from $25 to VIP Packages, which include a private dinner and Meet & Greet with Lee Greenwood on Monday, October 11th. For purchase, visit Ticketmaster.com or the Von Braun Center box office.

His stand-out hit “God Bless the U.S.A.” has been in the top five on the country singles charts three times (1991, 2001 and 2003), giving it the distinction of being the only song in any genre of music to achieve that feat. It reached the Top 20 of the Billboard Hot 100 chart shortly after 9/11. Known for his patriotism and support of the U.S. military, Greenwood has been honored with the Congressional Medal of Honor Society’s National Patriot’s Award and entertained troops on more than 30 USO Tours.

To keep up with everything Lee Greenwood visit leegreenwood.com.

About Outback Presents:
Outback Presents is the leading independent, full-service promoter of live entertainment. From their home base in Nashville, TN, Outback Presents specializes in producing music and comedy shows, tours, and festivals across North America and connecting their diverse roster of artists with their fans. For more information, visit www.outbackpresents.com.