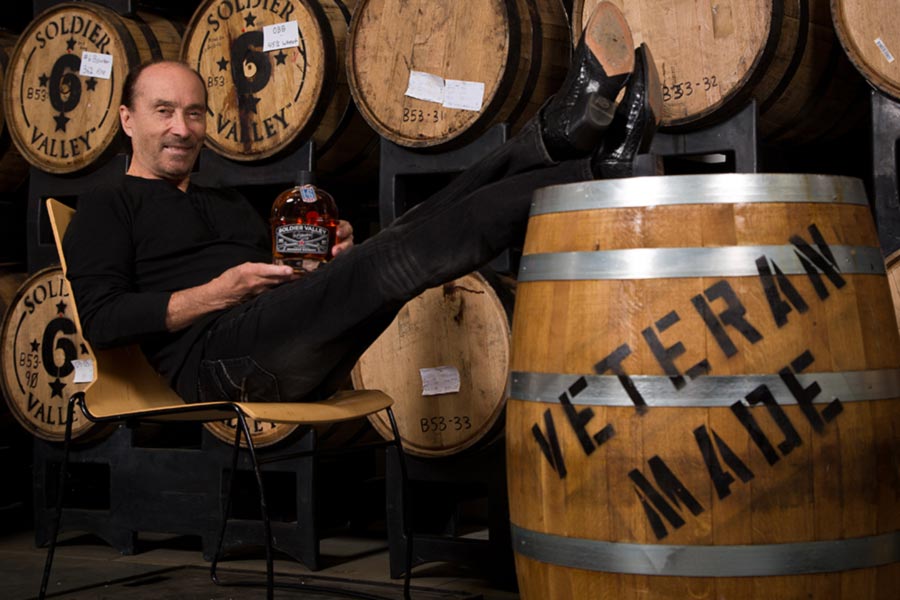 GALVESTON, Texas – Award-winning American patriot Lee Greenwood, known for his beloved anthem “God Bless The USA”, is scheduled to make a special appearance at the 2021 Lone Star Rally in Galveston, Texas on Thursday, November 4th. Greenwood will take to the Miller Lite main stage at Saengerfest Park at 2300 Strand Blvd on Galveston Island at 7 pm, followed by Colt Ford.

Just before the concert, Lee Greenwood will host a bottle signing in partnership with Soldier Valley Spirits from 2-4 pm, to benefit multiple veteran organizations. Greenwood will continue bottle signings at 7:45 pm, immediately following his performance.
All spirits are in a WWII canteen-shaped bottle embossed with the number “6” and include a hanging military-style dog tag showcasing the letters “LG”. Wondering what that “6” embossed on the bottle means? The “6” on every barrel and bottle is a constant reminder that we always have each other’s backs! Just like on a clock, the stars represent nine, twelve, three, and SIX. This is especially true for our veterans and the nonprofit veterans’ groups and first responders we support.

“We remember all the veterans that have sacrificed for all our freedoms,” says Greenwood. “I never imagined that I would have a bourbon, vodka, and whiskey with my name on it and, at the same time, help raise money and awareness for some great veteran organizations.”

“We at Soldier Valley Spirits celebrate and honor U.S. veterans who have served our great nation and continue with that tradition with the new Lee Greenwood Signature Spirit line, which raises money for some worthy veteran charities,” says Jeff Hadden, founder of Soldier Valley Spirits and Patriarch Distillers. “Being a veteran myself, I understand the dedication of our armed forces and will always have the utmost respect for their service.”

Greenwood was appointed to the council of the National Endowment for the Arts in 2008 by President George W. Bush, confirmed by the United States Senate, and serving under three additional administrations. His latest book release is a children’s book called Proud To Be An American, which is currently available at leegreenwood.com.

About Soldier Valley Spirits:
Soldier Valley Spirits and Patriarch Distillers follow the core values of faith, family, and freedom with service to the country. Family is the foundation of the business. It not only encompasses the family ties established through blood and marriage, it also represents supporting each other by working together to create the best products possible. The name Patriarch embodies the vision of the company’s commitment to family. Patriarch is a term that means the head of the family. The company name honors our Midwest parents and grandparents who have always put faith, family, and country before all things. For more information, visit soldiervalleyspirits.com.

About the Lone Star Rally:
Galveston is a true vacation hot spot in the summer peak- season, hustling and bustling with island visitors. However, when Labor Day weekend is over, the island becomes a much calmer and quieter place for a few weeks.

November brings in cooler weather, with nights chilly enough to dust off your leather jacket. Hearing the first rumbles echo across the island, singling the beginning of a 3-day event, Galveston’s Lone Star Rally! The motorcycle rally brings an estimated 400,000 visitors and well over a quarter-million bikes and trikes that flock to the island.

For more than a decade now, the island has become the perfect location to host the Lone Star Rally, with scenic views, ocean air, and two stages and event areas. The first stage and event area is located in the historic downtown district and the second is located at Beach Central on Seawall Boulevard, which happens to be along the world’s longest continuous sidewalk.

Once evening falls, visitors and motorcycles line The Strand in the downtown district to create an alleyway for motorcyclists to showcase their bikes and slingshots. As the crowd cheers, food vendors, leather workers, and crafters line the side streets for everyone to enjoy. This sense of community brings the island alive throughout the day and late into the night.