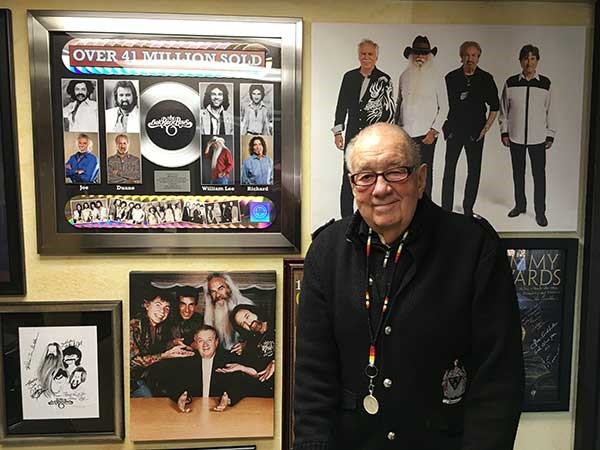 Halsey has represented 29 inductees into the Country Music Hall of Fame, as well as 12 members of the Rock and Roll Hall of Fame, and has played a pivotal role in bringing country music to television

INDEPENDENCE, Kansas – Legendary music impresario and manager Jim Halsey is celebrating more than 70 years in the entertainment industry. A pioneer of country music innovation and expansion, the 89 year old Independence, Kansas native was honored in his hometown with the 2,000 seat auditorium inside Memorial Hall being renamed to the Jim Halsey Auditorium. Now 89, Halsey has booked hundreds of acts and performances at the venue since 1949.

“This honor means more to me than anything else in my life. To be recognized in my home town that I love dearly is the best thing to ever happen to me,” said Halsey.

Over the course of his career Jim Halsey has played a key role in the direction and management of many country music giants. He has managed, booked or guided the careers of some of the most iconic figures in country music, including, Roy Clark, Waylon Jennings, The Judds, Hank Thompson, Merle Haggard, Reba McEntire, Wanda Jackson, Freddy Fender, Roy Orbison, Tammy Wynette, Rick Nelson, Clint Black, Dwight Yoakam, Minnie Pearl, James Brown and The Oak Ridge Boys, who he’s managed for over 45 years.

Halsey’s vision, marketing, and passion was fundamental to the rapid growth of a genre that may otherwise have taken many more years to develop. His leadership resulted in The Jim Halsey Company becoming the biggest Country music agency in the world. Halsey’s artists collectively have hundreds of gold and platinum records, received countless awards, including Grammy awards and nominations, and sold out shows at The Grand Ole Opry, Carnegie Hall, Radio City Music Hall and helped to expand Country music on a global basis, headlining festivals and performances all over the world. In 1976, Halsey took Country music artists Roy Clark and The Oak Ridge Boys on the first-ever tour of the U.S.S.R. To date, he is the only producer or manager who has ever presented every artist on a single episode of the Hollywood Squares, as well as book his acts in every Las Vegas showroom for an entire week.

In 2010 Halsey released an entertainment business book titled ‘Starmaker: How To Make It In The Music Business’ [Amazon | Goodreads] digging deep into the fundamentals of how to develop an act, get an agent, use press to build an audience, play the biggest and best forums and more. Halsey recently added to some of these stories with Tulsa World’s Jimmie Tramel, chronicling 70 stories from 70 years in the entertainment and music business. He has future plans to pen another book, detailing his many global adventures advancing music and entertainment around the world.

“My life and interest is really in people and what makes them work and the energy they have,” he said. “If you can observe and notice the energy of a person, then you have the ability to get, and use, parts of that energy yourself. So my whole life has been about trying to harness energy — for the good. So I’m still doing it today. The Oak Ridge Boys still exude that energy. I am inspired by them. They are my closest friends in the world, but they are inspirational to me and to a lot of other people, too.”