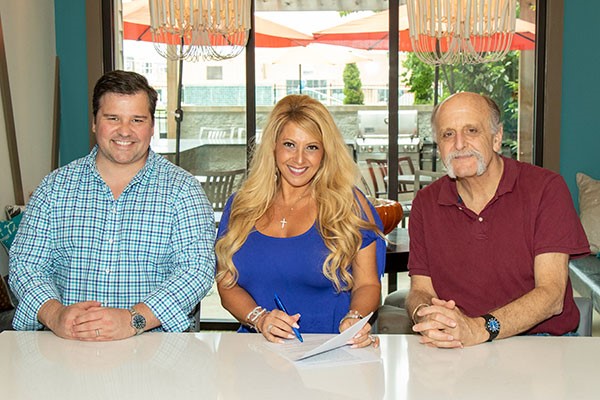 New Duets Project and Television Series To Be Released Soon

NASHVILLE, Tenn. – Lisa Matassa, known in the 80s as hitmaking freestyle dance star Lysa Lynn, returned to her roots of Country music in the mid 2010’s and recorded an album of solo material as well as an album of duets with legendary country music artists such as Eddy Raven, The Bellamy Brothers, Johnny Lee, Mickey Gilley, Marty Raybon of Shenandoah and more. Having shared the stage with Dierks Bentley, Leann Rimes, Eric Church, Ronnie Dunn and most recently Lee Brice, Matassa continues to write songs and finds joy in the process of making music.

Combining all her solo recordings and the duets, Matassa will be releasing a variation of projects, through ONErpm, that will include live recordings and performances filmed at The Wildhorse Saloon in June 2016 during CMA Music Fest. Those performances include duets with Larry Gatlin on The Gatlin Brothers’ 1985 hit, “Sure Feels Like Love,” with The Oak Ridge Boys on their phenomenal twelfth #1, “Little Things,” with T. Graham Brown on fan favorite “I Tell It Like It Used To Be,” and with Exile on the group’s last #1, “I Can’t Get Close Enough.”

“I am really excited about working with the team at ONErpm,” says Lisa Matassa. “I have been working extremely hard to make sure the recordings and the television series get the proper promotion they deserve. It’s a very special project for me and I am glad people will now be able to experience these great works of art.”

Matassa’s solo single “Somebody’s Baby” spent 15 consecutive weeks at Number 1 on iHeartradio.com and was Top 40 on both the BILLBOARD/BDS Indicator and MusicRow charts. The coinciding video logged nearly four million YouTube views and was such a hit that it was placed in over 3000 ClubCom Network-serviced health and fitness centers around the globe. ClubCom services over 1750 locations in the U.S., including fitness brands Bally’s, Cardinal Fitness, Crunch, Gold’s Gym, LA Fitness, Lifetime Fitness, Town Sports Int’l and Urban Active. In addition, it was placed in 1650-plus restaurants via Indoor Direct’s Dining Network Quick Service Restaurant channel. That success led to appearances on the then-popular national talk show Marie, Fox & Friends and more!

The new television series, currently being edited, will showcase Matassa’s experiences in the studio making the record, show behind the scenes at the Playin’ Possum – George Jones’ final concert celebration where Matassa performed, and lots of great music. More details will be released soon.