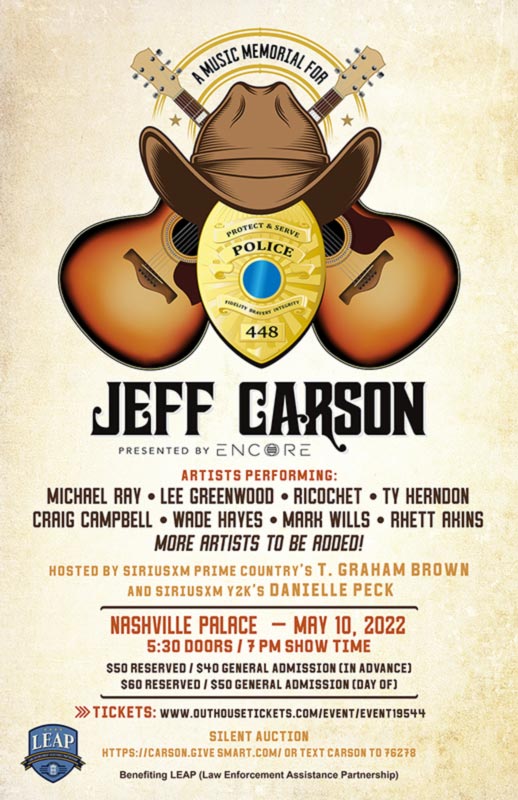 NASHVILLE, Tenn. – Michael Ray, Lee Greenwood, Mark Wills, Ty Herndon, Wade Hayes, Rhett Akins, Ricochet, Craig Campbell, and more are set to join together at ‘A Music Memorial For Jeff Carson’ to honor the country music hitmaker and Academy of Country Music award-winner. They will take the stage at The Nashville Palace in remembrance of their dear friend on Tuesday, May 10 at 7 PM to share, celebrate and honor their times with Carson through the years. Tickets go on sale Friday, April 15 at 10 am (CT) and are $50 for reserved seating and $40 for general admission.

For those who cannot make it to the event, but would like to support the cause, an online auction has been set up at carson.givesmart.com and donations can be made in Jeff’s honor at the link or text Carson to 76278. The link will be available on Friday at 10 AM.

“I am so happy that many of Jeff’s friends and peers are coming out to honor his memory and, at the same time, raise money for this charitable cause,” shares Jeff’s wife, Kim Carson. “Jeff would be so thrilled with what we are doing. He loved his country music family and he loved his law enforcement family, so this will be a really special night.”

Danielle Peck of SiriusXM’s Y2K and T. Graham Brown of SiriusXM’s Prime Country will be hosting the charity event to benefit the Law Enforcement Assistance Partnership (LEAP), a nonprofit organization that provides assistance to sworn officers of the FPD during unexpected life events. After retiring from country music, Carson pursued his other lifelong dream and joined the Franklin Police Department where he remained a dedicated officer until his passing.

About Jeff Carson:
Carson was born in Tulsa, Oklahoma, and began his musical career early on singing in church. He recorded demos, including Tracy Byrd (“Walkin’ To Jerusalem”), Tracy Lawrence (“I See it Now”), Reba McEntire (“The Heart Is A Lonely Hunter”), Tim McGraw (“I Wouldn’t Want It Any Other Way”), Faith Hill (“It Matters To Me”), Mark Wills (“Places I’ve Never Been”), Diamond Rio (“Mirror Mirror”) among others. “Yeah Buddy,” was his first charting single and was followed up with “Not On Your Love,” which went number one. The following single, “The Car,” became a top-five hit, topping out at number two and won Carson his first Academy of Country Music award for ‘Video of the Year.’ Carson had several other singles, including “Real Life (Was Never The Same Again)” from his album ‘Real Life.’ In total, Carson’s career achieved 14 charted singles on the Billboard chart. Carson took a break from music to become a law enforcement officer with Franklin Police Department in Williamson County, Tennessee, where he remained on the police force.

Returning to music in 2019, he signed with Encore Music Group and has been in the studio with Buddy Hyatt recording a specialty album to be released later this year that included duets with Michael Ray, Darryl Worley, Mark Wills, and Craig Morgan.

Suggested post:
#JeffCarson friends to celebrate life and career at #AMusicMemorialForJeffCarson on May 10 at #NashvillePalace