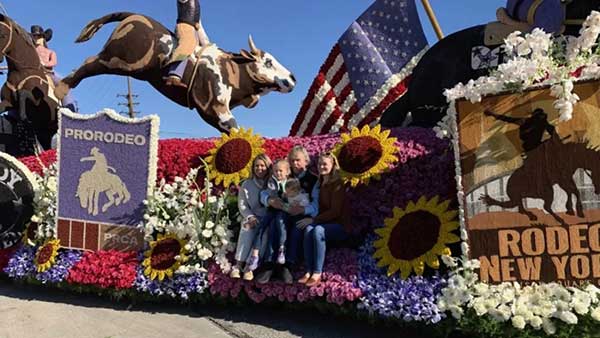 Fort Worth, Texas – Located in the heart of the Fort Worth Stockyards National Historic District, Billy Bob’s Texas first opened in 1981. Since then more than 17 million visitors have enjoyed live entertainment each month, when stars from the present and past grace the stages. January’s lineup doesn’t disappoint, where some of the biggest names in music grace the iconic Texas stage!

“It was so exciting to be their first-hand when the RFD-TV & Cowboy Channel float about rodeo won the Showmanship award, because that is about showmanship and entertainment – and anybody that knows professional rodeo knows it is definitely entertaining as well as athletic,” said Minick, long-time host of The American Rancher on The Cowboy Channel. “It was my 12th year to host the Rose Parade for RFD-TV and we present it like it should be with no commercial messages, let you listen to the bands, and we show all of the equine entries!”

The award goes to the “most outstanding display of showmanship and entertainment,” and is one of 24 given annually. Scores for each float are based on creative design, floral craftsmanship, artistic merit, computerized animation, thematic interpretation, color presentation, floral presentation and more.The Cowboy Channel’s “Walk.Ride.Rodeo.” float took more than 45,000 flowers to create and is about 75-feet long. You can see how it was made here and a photo gallery here.

New Concerts Announced & On Sale NOW!
More new shows have just been announced to the Billy Bob Texas concert calendar. Tickets are on sale NOW for the following concerts: