‘More To Be Said’ by Debbie Anthony Out Now! 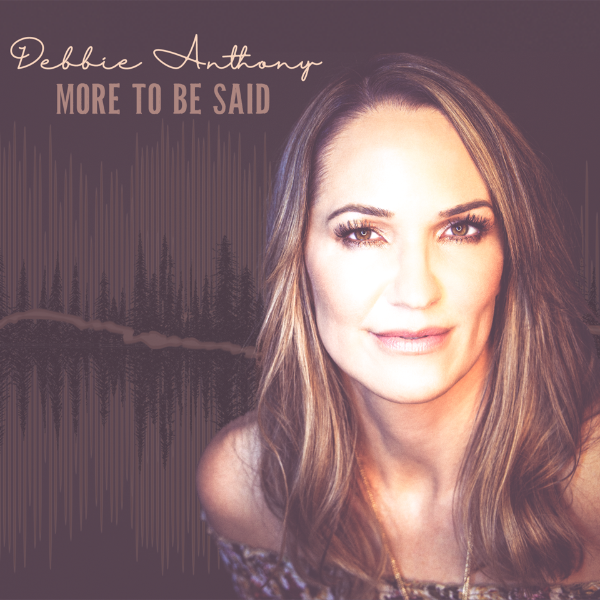 Duet with Dillon Carmichael on “There’s A Part Of Me”

It was a pleasure working with Debbie Anthony. She has got to be one of the kindest people, and such a sincere vocalist.”
– Dillon Carmichael, Country Artist

“From my experience working with Debbie Anthony, she does everything all the way, and it always comes from a place of love. More To Be Said represents her heart and soul. As her producer and more importantly, her friend, I am so excited for the world to hear her new album.”
– Gena Johnson, Producer

“Anthony’s polished vocals and heartfelt determination deliver a poignant message in her new single, ‘Make Me Stay.’ For anyone struggling with the notion of giving up, especially in a relationship, give this song a chance. Anthony may just help you find the strength to realize the end result may just be worth the temporary challenges.”
– Lindsey Sipe, The Country Note

“The journey of recording More To Be Said has been such an incredible mix of excitement, hard work, learning––and learning more,” Anthony explains. “Each song on this album represents my heart, life experiences, and the dreams and future ahead of me.”

“Working with Debbie Anthony and Gena Johnson was a fantastic experience,” said Mike Webb, keyboardist for the project. “We took each of the songs on the new album and found the perfect approach to represent Debbie’s soulful, heartfelt voice. She can sing it all – country, ballads, swampy rock, gospel – I look forward to the world hearing More to Be Said and am honored to be part of it!”

Anthony teased one of the album’s first songs “Make Me Stay,” which premiered at TheCountryNote.com in March of 2019.

“I’m excited to share my heart in this piercing, emotionally-packed song about love and the elements that come with it––pain, passion, longing, and above all, hope,” Anthony explained.

Throughout More To Be Said , Anthony delivers a rare combination of experience and emotion, with a voice that will satisfy and surprise true lovers of country music. Producer Gena Johnson perfectly captured Anthony’s soulful and honeyed voice and emphasized the heartfelt lyrics.

“From my experience working with Debbie Anthony, she does everything all the way, and it always comes from a place of love,” said Johnson. “More To Be Said represents her heart and soul. As her producer and more importantly, her friend, I am so excited for the world to hear her new album.”

“Working with my incredibly gifted producer, Gena Johnson, and all the talented musicians, has been one of the most extraordinary experiences of my life,” Anthony concluded.

More To Be Said Album Release Show: Sunday, Oct. 6 in Rochester, Minn.:
Anthony will celebrate the release of her new album in her hometown of Rochester, Minnesota with an intimate live performance at The Rochester Civic Theatre on Oct. 6. She’ll welcome the album’s Producer, Gena Johnson, and Nashville-based Mike Webb to the stage that evening where they’ll perform the album in its entirety and share some special stories about the songs.

Anthony is excited to share these new songs and showcase them with all of the incredible musicians for her hometown.

“I could not think of any better way to celebrate the realization of this dream with my hometown than to have my Nashville producer, Gena Johnson, and Nashville keyboardist, Mike Webb, to join me at my launch party! Together, we will make it a memorable evening for everyone!”

About Debbie Anthony:
Debbie Anthony was born to make music. Raised in Minnesota, trained as a voice major at North Central University in Minneapolis, she drew inspiration from sources as varied as classic arias and Karen Carpenter. But after hearing Shania Twain, she knew that country music was her destiny.

With her children grown, Debbie now steps into the spotlight with More To Be Said. This collection of classically crafted songs and strikingly distinctive vocals proves that her time has come — and, more than that, assures her a place among today’s outstanding country artists.