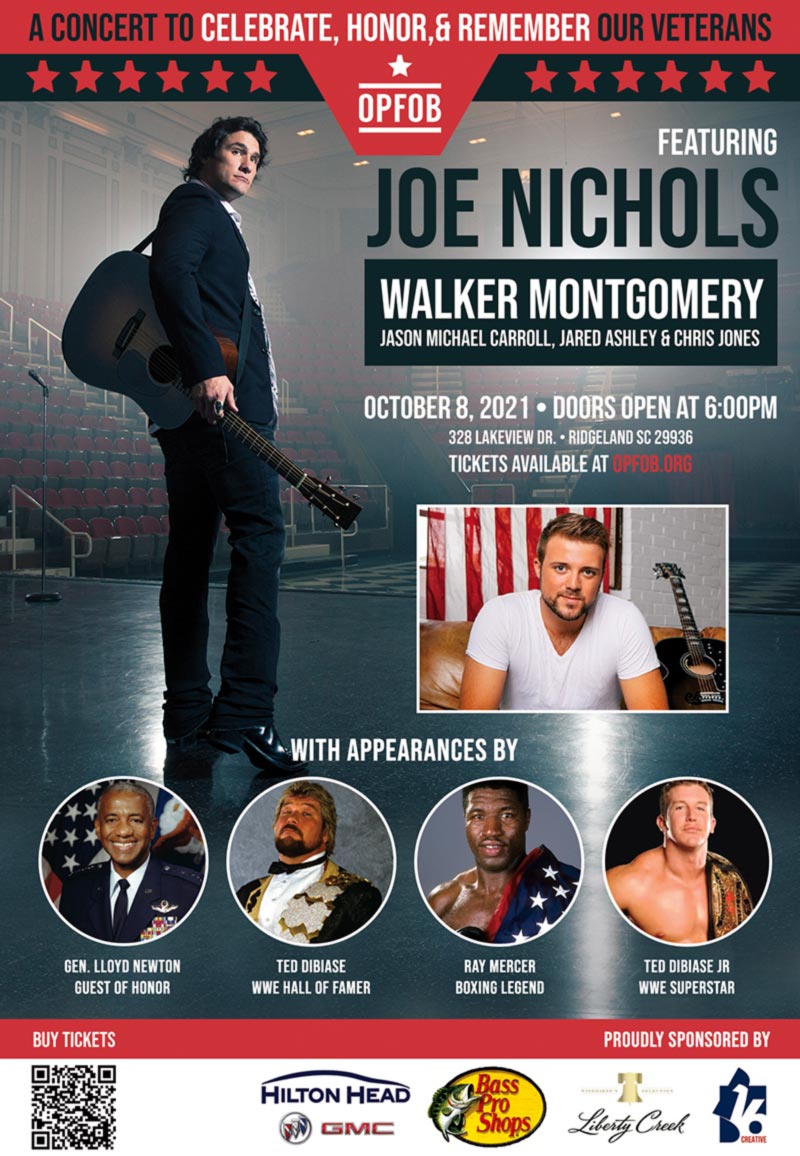 RIDGELAND, S.C. – Strategic marketing and branding company 16 Creative, founded by former WWE Superstar Ted DiBiase Jr., son of WWE Hall of Famer, “The Million Dollar Man” Ted DiBiase, along with music industry veterans Jared Ashley and David Keller, has teamed up with Operation Patriots FOB, Bass Pro Shops and Hilton Head GMC to present Operation Patriots FOB (OPFOB) on October 6-10 with a special ‘Concert for Heroes’ Friday, October 8th to honor Lowcountry combat veterans. The event will be held in Ridgeland, South Carolina for the first time and will feature CMA and ACM Award winner Joe Nichols and country musicians Walker Montgomery, Jason Michael Carroll, and US Navy Veteran Jared Ashley. The outdoor and recreational activities held by OPFOB allow Veterans to create and foster positive experiences, helping deal with PTSD and other hardships they may be struggling with as a result of battle. OPFOB creates a safe place for Veterans to come together to relax and have a good time, enjoying the company of those who understand the most.

“Partnering with these awesome veterans out here at Operation Patriots FOB is a dream as these guys get it,” shares Jared Ashley. “Adding the songwriter/music event just shines a much-needed light on all the amazing things they’re already doing out here for our veterans and their families. We want to take advantage of those things and invite people out to celebrate and honor those who have given so much to our country. We honor them with events like Operation Cherrybend in Wilmington, Ohio and now Operation Patriots FOB here in Ridgeland, South Carolina.”

About Operation Patriots FOB:
Operation Patriots FOB (OPFOB) creates a place for veterans to come together, relax and have a good time with their brothers and sisters. A space where they feel accepted and are able to open up without doctors hovering over them trying to analyze the worst days of their lives with a textbook diagnosis. Instead, they’re given the opportunity to regain that connection to the people who will understand the most and ask the least. For more information, visit opfob.org.

About 16 Creative:
We are 16 Creative. As the world’s first, Veteran owned, multi-focused branding agency, we are privileged to work with an iconic lineup of professional wrestlers, athletes, Veterans, and military organizations to bring their legacy to life through strategic marketing campaigns and branded merchandise. Whether it’s apparel or their own line of sauces and seasonings, 16 Creative has the resources to bring their ideas to fruition. We turn ideas into revenue to help create a legacy that lasts a lifetime and beyond. 16 Creative is comprised of two specialized divisions, The Wrestling Collection and The Military Collection. For more information, visit sixteencreative.com.

About Jared Ashley:
After high school, Jared joined the U.S. Navy, serving four years in Yokosuka Japan aboard the aircraft carriers USS Independence and USS Kitty Hawk. It was during this time that he began to hone his craft leading to a career in country music. After finishing 5th on season four of “Nashville Star”, Jared hit the road playing more than 150 dates per year and touring all over the United States and abroad promoting his first radio single which landed him in the top 50 on The Billboard Charts. Always one to have an entrepreneurial spirit, Jared has played a major role in his day-to-day operations overseeing booking, merchandising, and more. Throughout his career Jared has used his platform to give back to the troops and their families currently serving abroad touring with The Navy Exchange and Navy Entertainment, Jared has also created events like Operation Cherrybend and Operation Patriots FOB, and Hero’s Concert to honor and support his fellow veterans and raise awareness of the trials and tribulations veterans suffer every day.