Paige King Johnson Performs at ‘Got to Be NC’ Festival as their Musical Ambassador on Friday, May 20 in Raleigh, NC 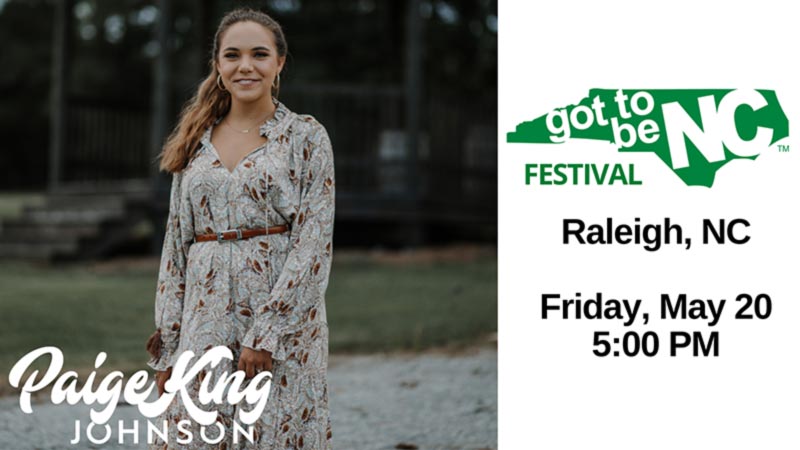 RALEIGH, N.C. – Country music singer-songwriter Paige King Johnson is excited to perform at the Got to Be NC Festival in Raleigh, N.C. on Friday, May 20 at 5 pm. Johnson has partnered with the North Carolina Department of Agriculture as their Musical Ambassador for the Got to Be NC campaign. Johnson will take the Homegrown Music Stage at the NC State Fairgrounds, playing her popular songs and crowd favorites including “Homes in The Hometowns,” her recent release that serves as the anthem for Got to Be NC campaign. Paige will also be making an exciting announcement regarding the next stages of her ambassadorship and the AgStar North Carolina Talent Competition. Johnson would love to see you there for this great family-friendly event!

For more information and the full music schedule, visit HERE.

‘I’ve attended the Got to Be NC Festival for many years as a young girl who just appreciated North Carolina agriculture & wanted to learn more about it,” shares Johnson. It means so much to be a small part of this year’s festival, especially after not having the festival for a couple of years. This year’s event will be special in so many ways, and I can’t wait to join in on the fun with so many other North Carolina people!’

Johnson recently released her latest single, “American Beauty” highlighting the carefree yet confident feeling of finding your own path. Johnson’s latest lyric video for the upbeat song displays empowered women in movie-reel style clips while the red, white, and blue colors symbolize the liberating sensation of uncertainty. The creative lyrics of not knowing exactly where life will take you but trusting that everything will work out if you stay true to who you are tied in perfectly with the visuals throughout the video.

The famous Bluebird Café was just one of many writers’ circuits around Nashville that provided a safe space for Johnson to meet other writers, try out new tunes, and get feedback. In return, Johnson began captivating audiences with her down-home stage presence, cut straight to the bone stories and raw country voice, reminiscent of the classic country era. In the last four years, Johnson has traveled back and forth between Nashville and the Carolinas, playing shows like the North Carolina State Fair and running her dinner theater, Country on the Outskirts of Town, that she founded in high school. Johnson’s quarterly show provides an atmosphere for locals to enjoy Southern cooking, fellowship with friends, and the sounds of classic and current country music with some gospel thrown in. A three-time Carolina Country Music Awards Winner for Female Vocalist of the Year, Country Emerging New Artist, and Tour of the Year, Johnson’s devoted homegrown fan base continues to expand farther than just her backyard. For more information, visit paigekingjohnson.com.

About the Got to be NC Agriculture Program:
Got to Be NC is an initiative on behalf of the North Carolina Department of Agriculture & Consumer Services to promote North Carolina agricultural products and goods. From its beginning in 1985, the brand has always supported North Carolina’s diverse agriculture economy through education, engagement, and promotions. Our initiatives are designed to increase consumer awareness of local products, leading to increased sales and continued growth for North Carolina’s food, fiber and forestry industries. The program has adapted and evolved along with the global agriculture market and provides support to an industry that serves the world and touches all lives. For more information, visit gottobenc.com.