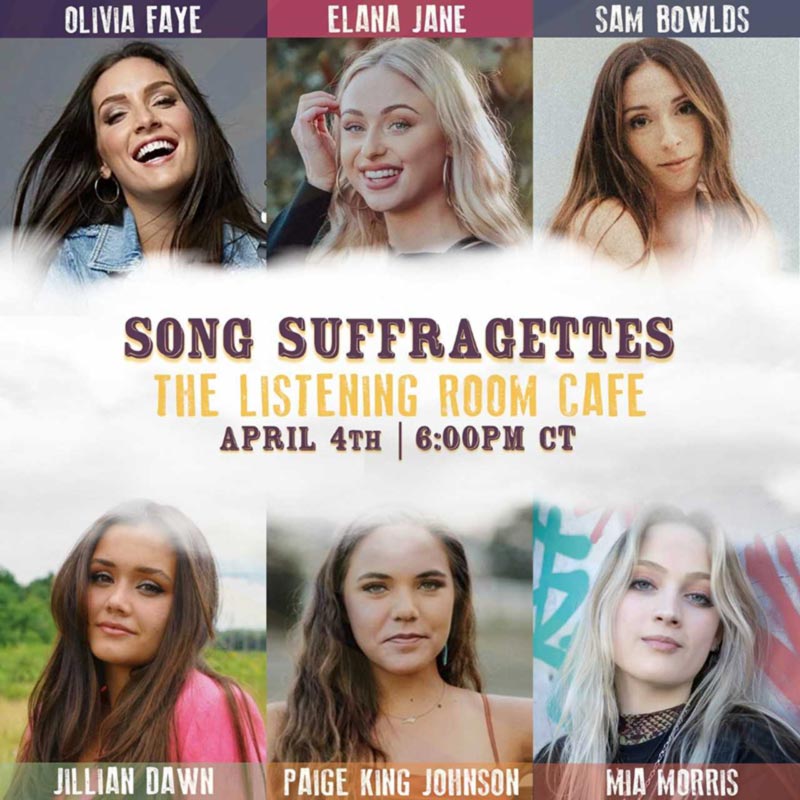 “Ever since I moved to Nashville, I have always dreamed of being a part of the Song Suffragettes,” says Johnson. “It’s always an honor to share the stage with these ladies to support women in country music. I hope you will join us for an evening of great music and likely some stories behind the songs.”

The all-female singer-songwriter collective titled Song Suffragettes, is a one-hour weekly acoustic showcase featuring up-and-coming female country artists. The stellar showcase creates greater opportunities for females in the music industry to be noticed and heard. Over 250 female artists have contributed to the popular collective. Additionally, the event can be viewed live online.

The famous Bluebird Café was just one of many writers’ circuits around Nashville that provided a safe space for Johnson to meet other writers, try out new tunes, and get feedback. In return, Johnson began captivating audiences with her down-home stage presence, cut straight to the bone stories, and raw country voice, reminiscent of the classic country era. In the last four years, Johnson has traveled back and forth between Nashville and the Carolinas, playing shows like the North Carolina State Fair and running her dinner theater, Country on the Outskirts of Town, which she founded in high school. Johnson’s quarterly show provides an atmosphere for locals to enjoy Southern cooking, fellowship with friends, and the sounds of classic and current country music with some gospel thrown in. A three-time Carolina Country Music Awards Winner for Female Vocalist of the Year, Country Emerging New Artist, and Tour of the Year, Johnson’s devoted homegrown fan base continues to expand farther than just her backyard. For more information, visit paigekingjohnson.com.

About Song Suffragettes:
Song Suffragettes is a collective of female singer-songwriters that performs every Monday night at The Listening Room Café in Nashville, TN. In six years, Song Suffragettes has showcased over 250 talented women out of over 1,400 who have submitted to play the show. With weekly sell-outs and a mantra of #LetTheGirlsPlay, Song Suffragettes vocally combats widespread discrimination against women in the music industry by giving female talent a place to play, grow and evolve with fellow creatives. Since its inception, 16 Song Suffragettes women have gone on to receive record deals and over 40 have landed music publishing deals. With over 3 million views on their YouTube channel, Song Suffragettes was named by Billboard magazine as one of “Next-Gen Nashville: 16 People, Places and Things Shaking Up Music City”. On April 26th, four Song Suffragettes will embark on the collective’s first U.K. Tour that will visit London, Glasgow, and more. Featured in Forbes, ELLE, USA Today, Washington Post, Grammy.com, Boston Globe, and on PBS NewsHour and NPR, Song Suffragettes continues to fight for female talent to be heard throughout the country and beyond. For more information, visit SongSuffragettes.com.