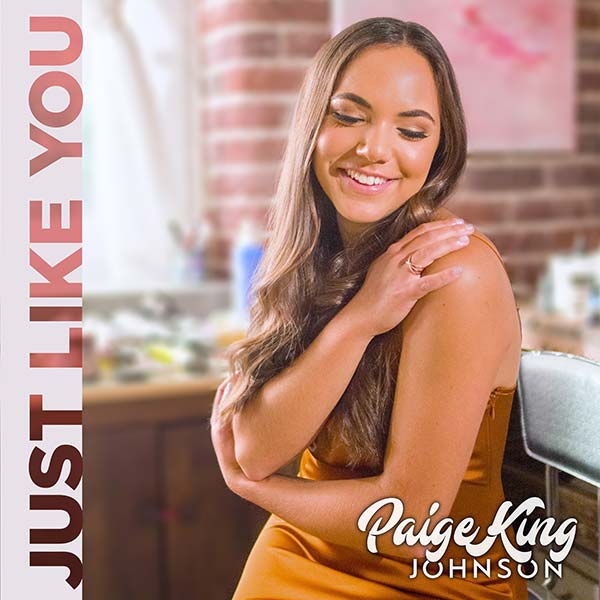 “Just Like You” Lyric Video Premiered Exclusively on Music Crowns

NASHVILLE, Tenn. – Nashville based singer/songwriter Paige King Johnson reveals ideals of luck and love with the release of her latest single, “Just Like You.” Redefining a new class of country music, “Just Like You” encapsulates the love of a boy and a girl who were made for each other. The song details qualities that are ‘just like’ a love that is far from perfect, but more than enough for the pair. The single, produced by Bill McDermott and written by Johnson and Regan Rousseau, is Johnson’s first release with the distinguished PCG Artist Development Records based out of Nashville, Tennessee. “Just Like You” is now available to download and stream on all digital platforms and with an exclusive lyric video premiered by Music Crowns.

“Just Like You” was written with a fellow Belmont student and dear friend, Regan Rousseau. I’m fortunate enough to have a man in my life who does nothing but treat me with the utmost respect and selflessness, and as a songwriter, I wanted to let him know that I don’t take it for granted the best way I know how – in a song. It’s a song about the beauty of two people showing up for each other through the good and the bad times of a relationship simply because they love each other more than anything else that takes up their time,” expresses Johnson.

“Just Like You” keeps the fire lit for fall with a uniquely passionate love story that serves to ease confusion and doubt within listeners’ personal relationships. The song is a reminder that though the process can be messy from time to time; the true love that exists just within reach is worth the wild ride through thick and thin to get there. Aside from working feverishly in the studio to bring the world the unique stylings of “Just Like You,”  Johnson created, hosted, and performed at the first annual “Country Yard Party” music festival in her hometown of Angier, North Carolina on August 29th in true social distancing fashion. There is no end to what this stand out star is capable of achieving through rare creative compassion. Fans will not want to miss this one-of-a-kind release!

“Paige King Johnson is in the new class of authentic country singer/songwriters. Her signature sound, heart, and soul are reflected in everything she does,” says Bernard Porter, CEO of PCG Artist Development Records.

Visit HERE and follow the socials listed below to keep up with everything Paige King Johnson.

The famous Bluebird Café was just one of many writers’ circuits around Nashville that provided a safe space for Johnson to meet other writers, try out new tunes, and get feedback. In return, Johnson began captivating audiences with her down-home stage presence, cut straight to the bone stories, and raw country voice, reminiscent of the classic country era. In the last four years, Johnson has traveled back and forth between Nashville and the Carolinas, playing shows like the North Carolina State Fair and running her dinner theater, Country on the Outskirts of Town, that she founded in high school.  Johnson’s quarterly show provides an atmosphere for locals to enjoy Southern cooking, fellowship with friends, and the sounds of classic and current country music with some gospel thrown in.  A three-time Carolina Music Awards Nominee for Best Country Female Artist, Johnson’s devoted homegrown fan base continues to expand farther than just her backyard.