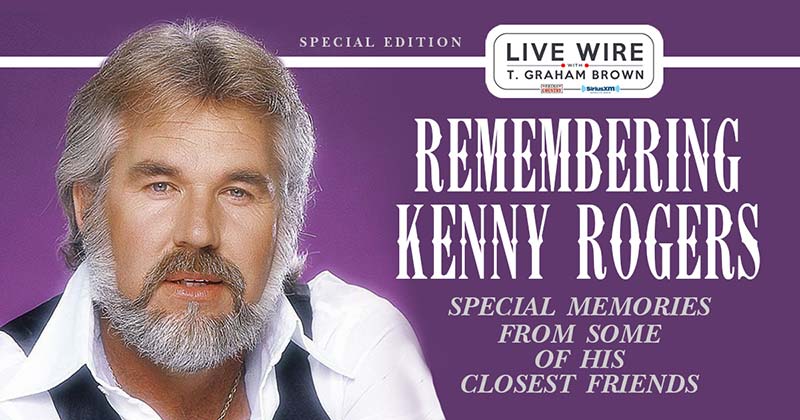 Nashville, Tenn. – Country hit-maker T. Graham Brown will host ‘Remembering Kenny Rogers‘ special to premiere Friday, March 27th at 9/8c on SiriusXM’s Prime Country Channel 58. This heartwarming two-hour show will feature live cuts from Kenny Rogers’ ‘Live By Request’ album and more. As part of the tribute, some of Kenny’s closest friends share their most precious memories and remember Kenny Rogers through the years. T. Graham Brown hosts LIVE WIRE each month on the channel, showcasing live cuts & interviews with some of T. Graham Brown’s closest friends and heroes while sharing fun stories about life on the road.

“Kenny Rogers was larger than life in so many ways,” explains T. Graham Brown. “I toured the country doing shows with him and heard his hits night after night. Just about everyone in country music during his career opened for him and it is hard to imagine a world without Kenny. Thankfully his music will live on in our hearts and with the help from those who loved him the most, we have a great show, remembering our “Sweet Music Man” from all “Through The Years.”

The special is also available on-demand worldwide with the SiriusXM app and Pandora NOW with a standard SiriusXM subscription.

SiriusXM is offering a free three-month trial for new subscribers, to listen in the car, online, on your phone or at home. Listen to their On Demand Library, including shows, performances, and interviews, as well as SiriusXM video, plus personalized stations Powered by Pandora. For more details, visit siriusxm.com.

In early 2015, Brown released his Grammy nominated album, Forever Changed, which featured collaborations with Vince Gill, Jason Crabb, The Oak Ridge Boys, Jimmy Fortune and more. T. Graham Brown still actively tours throughout the year, including multiple appearances on the legendary Grand Ole Opry and television appearances such as Larry’s Country Diner and Country’s Family Reunion. Brown’s uniqueness has made him one of the most beloved and iconic performers of the day.