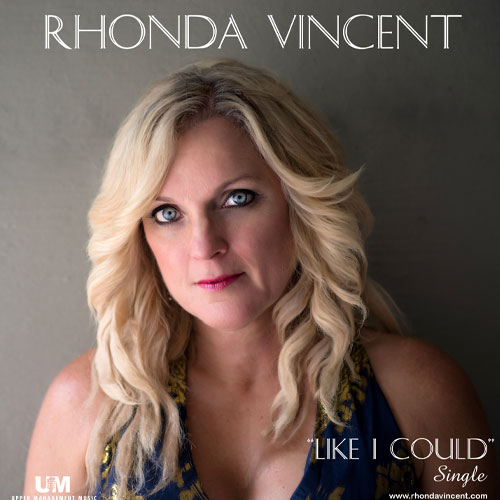 NASHVILLE, Tenn. – Rhonda Vincent, affectionately known as the Queen of Bluegrass, premiered her brand new single “Like I Could” onstage at the Grand Ole Opry on Wednesday, June 19. Co-written by Grand Ole Opry country music star Jeannie Seely, along with Erin Enderlin and Bobby Tomberlin, Vincent’s bluegrass interpretation of the country song is a beautifully composed, string-driven melody, which highlights her soaring vocal abilities. The song also made it’s online premiere at the Bluegrass Situation.

“As soon as Jeannie Seely started singing ‘Like I Could’ to me, I instantly loved it. It felt like it was written just for me and my vocal style. As we were recording the tracks, it just felt right. You know when you can feel that something is just right for you; like trying on that perfect dress, or pair of shoes. This song was just the right fit.”

There wasn’t a song search, or a target recording date for the song. Frankly, the entire process was a continuous chain reaction of spontaneous events. Vincent discovered the song while riding in a limousine with Jeannie Seely, who was sharing her fear of co-writing by appointment, and how she finally faced her fear with the writing of the song. At the encouragement of fellow Opry member Bill Anderson, Seely wrote the song with Erin Enderlin and Bobby Tomberlin. Seely sang her new song as the limo rolled along, and Rhonda instantly loved it and told Jeannie she wanted to record it. Jeannie, in total amazement, later texted Rhonda to ask if she really wanted to record it, or was it merely an impulse reaction. Rhonda really loved it and could not wait to record it.

“I feel that many people will relate to this song and its tremendous heartbreak and sadness,” said Vincent. “My hope is that there are people who hear this song, namely those in the midst of the devastation of a breakup, who will reconnect and renew their love with each other. It has a very desperate message, asking, ‘What happened, I thought you could see us together forever?’ Maybe this is the perfect song and question they need to hear to bring them back together.”