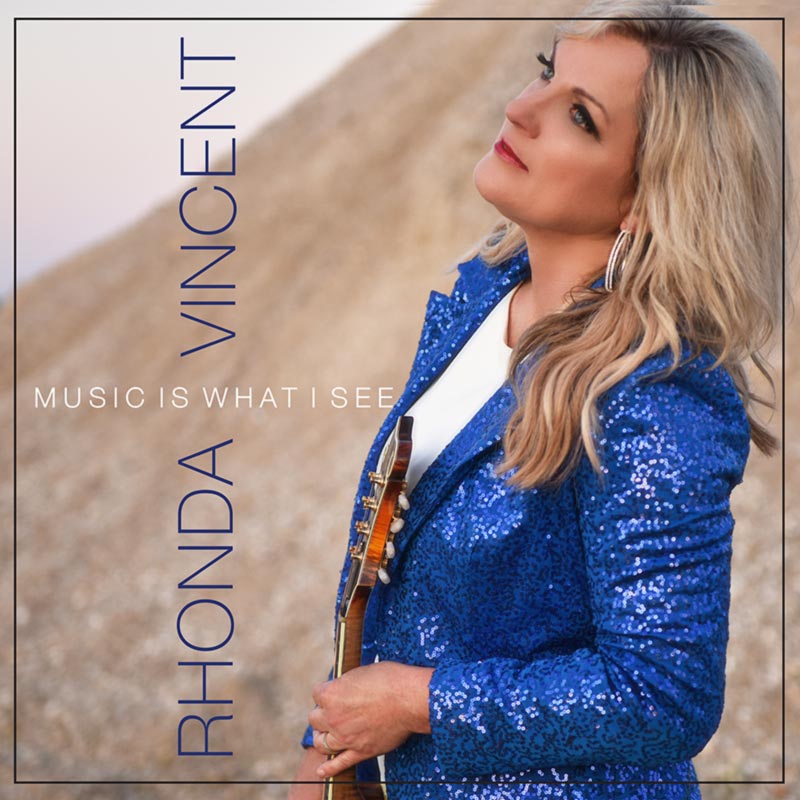 For an example of a modern maven with constant fan support and a sustained level of musical excellence, look no further than the Queen of Bluegrass, Rhonda Vincent.”
– Wide Open Country

“I Ain’t Been Nowhere” is a lyrical look at the pandemic-riddled year of 2020, bursting with specifics and anecdotes that will cement the song as a snapshot of this crazy time for years and years to come.”
– Taste Of Country

NASHVILLE, Tenn. – Multi-award-winning bluegrass artist and Grand Ole Opry member Rhonda Vincent’s new album ‘Music Is What I See,’ is available now! Although this record was slated for an earlier release, due to the events of 2020, Vincent used this time off to focus on every detail, creating the perfect mixture of bluegrass and country. Vincent’s high-spirited energy is clearly present through her soaring vocals, blend of new tunes, and fresh arrangements of classics such as the first-ever recorded bluegrass version of the classic, “Unchained Melody,” which she recently debuted live at the Grand Ole Opry. With her brand new album and a growing tour schedule, “The Queen of Bluegrass” is back in full swing!

“It is so exciting to finally have ‘Music Is What I See’ available,” shares Vincent.“ This project features my world-class band, The Rage on straight ahead, hard drivin’ bluegrass, country classics, to a special arrangement, and perhaps the first-ever bluegrass version (complete with banjo) of “Unchained Melody”. “Unchained Melody” was truly the most challenging song I’ve ever sung. I purposely created a balance of new songs with timeless classics. It’s my first record release since officially being inducted into the Grand Ole Opry. Life is truly grand!

While celebrating the release of ‘Music Is What I See’ this past weekend, Vincent performed during two segments at The Grand Ole Opry and made history as the last artist to host The Ernest Tubb Midnite Jamboree at the Texas Troubadour Theatre in Nashville, Tennessee, before going back to its original home on lower Broadway. Throughout the show, Vincent surprised the audience with special appearances by Grand Ole Opry Member Jeannie Seely and songwriter Erin Enderlin. Fans were also delighted as Hee Haw’s Lulu Roman and Country Music Hall of Famer Randy Travis joined them in the audience to commemorate the occasion.

Leading up to the album release, Vincent has been featured in People.com, Taste of Country, and Wide Open Country, where each outlet premiered a new single. Growing up performing in her family’s band, The Sally Mountain Show, music was not just something she loved, it was a way of life. This shows in every track, whether referring to “What Ain’t To Be Just Might Happen” written by Porter Wagoner or “Like I Could,” which was written by Jeannie Seely, Erin Enderlin, and Bobby Tomberlin, the Grand Ole Opry weaves throughout this entire project.

For more information and to keep up with everything Rhonda Vincent, visit her website and follow her social channels below.

About Rhonda Vincent:
The Grammy-winning Queen of Bluegrass Rhonda Vincent began her professional music career at the age of five, singing with her family’s band, the Sally Mountain Show. She picked up the mandolin at eight and the fiddle at twelve, performing with the family band at festivals on weekends. Rhonda struck out on her own, singing with the Grand Ole Opry’s Jim Ed Brown. Her opportunity eventually led to a deal with Rebel Records. Her work caught the attention of Giant Nashville’s president, James Stroud, who signed Vincent to record two contemporary country albums. After Giant, she signed with Rounder Records where her passion for traditional bluegrass music flourished. With the release of her debut album “Back Home Again,” “The Wall Street Journal” crowned Rhonda Vincent the New Queen of Bluegrass. She’s a multi-award winner, with a Grammy for Best Bluegrass Album (2017), Entertainer of the Year (2001), Song of the Year (2004), and an unprecedented 7 consecutive Female Vocalist of the Year awards from the International Bluegrass Music Association (2000 – 2006). Her powerful vocal style transcends the boundaries of bluegrass music, as evidenced in her collaboration with Dolly Parton on the Elton John / Bernie Taupin Tribute Project “Restoration” 2018. Rhonda Vincent’s lifelong dream came true when she became a member of the Grand Ole Opry on February 6, 2021.