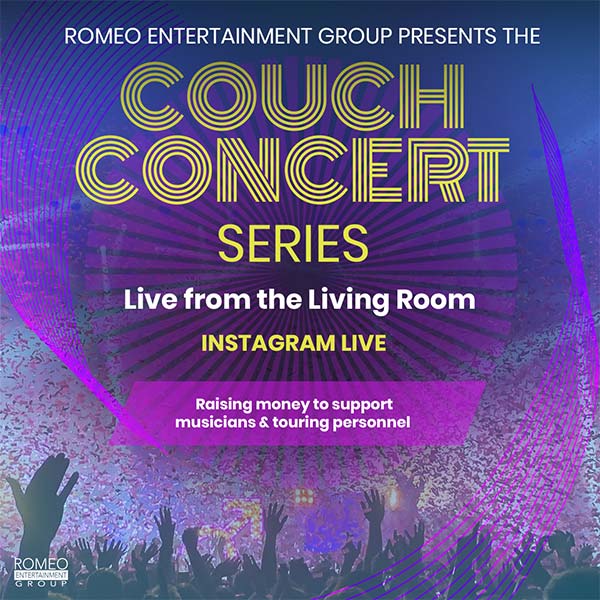 Nashville, Tenn. – Romeo Entertainment Group, one of America’s largest independent buyers of entertainment, began presenting the ‘Couch Concert Series’ Wednesday, March 18th in an effort to keep the music playing and to entertain those at home during times of social distancing. The concerts feature artists performing their latest songs and engaging with the audience through live stream to prove that music continues to heal.

“We’re committed to keeping the music alive so we are bringing the concerts to you!” said REG President R.J. Romeo. “The entire entertainment community is suffering tremendously during this time and we all know how music heals and brings joy. We are hoping that ‘The Couch Concert Series’ will put some smiles on faces and remind everyone that we will get through these trying times.”

Aside from entertaining, The Couch Concert Series – which launched last week – serves as a way to raise money to support local musicians and touring personnel that may be struggling during this time. Romeo Entertainment Group recognizes that many in the live events industry are hurting right now due to so many concerts being either canceled or postponed. Please consider donating to MusiCares or Musicians Foundation.

Take a look at the schedule below to see who will be taking over REG’s Instagram page to perform LIVE at 3:00pm CST every day.

If you’re interested in booking any of the featured artists for your next REG event click here.

About Romeo Entertainment Group:
Romeo Entertainment Group (“REG”) is an award-winning full service talent buying agency. Family owned and operated for 65 years, REG continues to be one of the preeminent talent buyers and concert producers in the United States. REG assists with all aspects needed to produce successful concerts, from talent acquisition, negotiation, contract review and processing, marketing, promotions, and production consultation. With over 120 annual multi-day events in 36 states taking place in over 80 different cities throughout the United States and Canada, REG represents one of the largest buying networks of live entertainment from the Midwest through the Northwest regions. In 2019 alone REG produced nearly 500 concerts at over 120 unique venues throughout the United States and Canada featuring 335 unique big name entertainers from various genres including country, rock, pop, hip-hop, blues, Christian, and comedy.

REG’s award winning talent buyers have received multiple Academy of Country Music, Country Music Association, and International Entertainment Buyers Association awards. These honors include the prestigious IEBA Industry Achievement Award bestowed upon REG in 2014. The honor went to REG for “it’s decades of success as one of the largest independent talent buying agencies and entertainment producers in the entertainment industry.” Pam Matthews, Executive Director of IEBA, was quoted in the Press Release as saying, “everyone in the business knows a Romeo date is always a great date because excellent client service with a personal touch is in the family DNA.” Most recently R.J. Romeo received the “Don Romeo” ACM Talent Buyer of the Year Award for 2018 and the 2018 IEBA Fair Buyer of the Year Award.

For more information, visit romeoent.com or follow their socials linked below