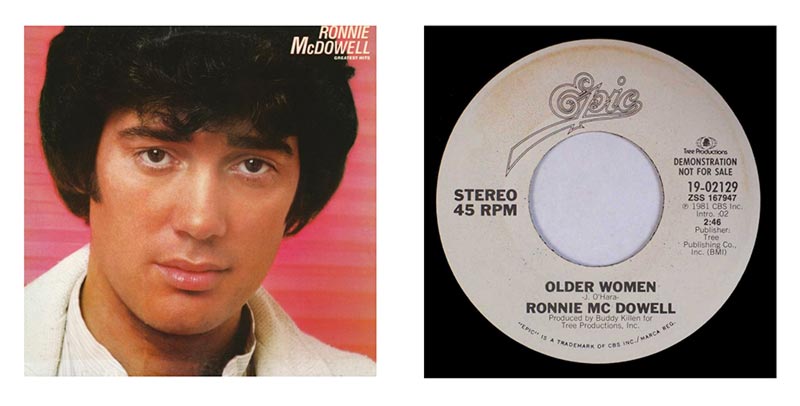 NASHVILLE, Tenn. – Country music hitmaker Ronnie McDowell is celebrating the 40th Anniversary of his hit single, “Older Women” which reached number one in 1981. Now, in 2021 “Older Women ” has gone viral on Tik Tok reaching nearly 130 million views and counting through a cover by The Sheltons. At the encouragement of his legendary producer, Buddy Killen, Ronnie wanted to celebrate ladies who don’t let their age dictate their actions and a social standard silence their youth. This is one of the rare singles that not only bring light into a serious world but also applies to all generations with a message that will live on through time.

“I was very reluctant about recording “Older Women” because I thought it would be detrimental to women but was I ever wrong,” explains McDowell. “It actually made ladies over 40 feel good about themselves and it lifted them up! I never knew 40 years later I would be singing the song over 15,000 times. But you know what, every time I sing it, it’s still just as fresh as the first time.”

Since his breakout tribute to Elvis Presley, “The King is Gone” took the world by storm, Ronnie McDowell has charted more than thirty Top 40 hits on the Billboard country music charts. Two of his singles, “Older Women” and “You’re Gonna Ruin My Bad Reputation,” reached No. 1 on the country charts. He has also released more than twenty studio albums.

About Ronnie McDowell:
Like all great entertainers, Ronnie McDowell has a personality that remains luminous long after the lights go dim. These qualities have inspired a nationwide network of fan-clubs with more than 3,000 members, each one a devoted promoter of everything McDowell does. Following the death of Elvis Presley in 1977, Ronnie McDowell came out of nowhere to dazzle the world with his heartfelt and self-penned tribute song “The King Is Gone” on the independent Scorpion label. The record took off immediately, gaining airplay on country and pop stations across the country and around the world. To date, “The King Is Gone” has sold more than five million copies. McDowell scored a second hit for the Scorpion label titled “I Love You, I Love You, I Love You” before being wooed and signed by CBS Records – Epic label in 1979. He continued to chart a string of hit singles and albums for Epic between 1979 and 1986. Every single release with the exception of just one became a Top 10 Hit including the chart-toppers “Older Women” and “You’re Gonna Ruin My Bad Reputation.” Other hits during his Epic years included “Watchin Girls Go By,” “Personally,” “You Made A Wanted Man Of Me,” “All Tied Up” and “In A New York Minute.” He sought the advice of artists such as Conway Twitty who became, in essence, not only his mentor but his friend as well. Twitty helped the young singer with advice about touring, recording, and most of all, entertaining fans. Twitty was certainly the master and Ronnie McDowell quickly became his prize pupil. Moving to Curb Records in 1986, his current label to date, McDowell scored a Top 10 hit with “It’s Only Make Believe,” a duet with Conway Twitty on what was Twitty’s breakthrough hit from 1958. Two years later Ronnie teamed up with Jerry Lee Lewis for a rocking duet that McDowell wrote titled, ”You’re Never Too Old To Rock N’ Roll.” He also recorded yet another Top 10 hit with his version of the pop standard “Unchained Melody,” which also became a #1 country music video. His entertaining abilities soared and he began to draw larger crowds. He started appearing in larger venues and touring with artists such as Conway Twitty, Tammy Wynette, and Loretta Lynn before headlining his own shows. McDowell also achieved notoriety when he sang 36 songs on the soundtrack “Elvis,” the Dick Clark-produced television movie that featured Kurt Russell as the performer. He also was the singing voice for the television movie “Elvis And Me”, the ABC television series about the early years of Elvis’ career titled simply “Elvis” as well as, the 1997 Showtime special “Elvis Meets Nixon.” While Elvis Presley has played a big part in Ronnie McDowell’s musical career over the years, Ronnie continues to entertain audiences with his own blend of romantic intimacy and country excitement.