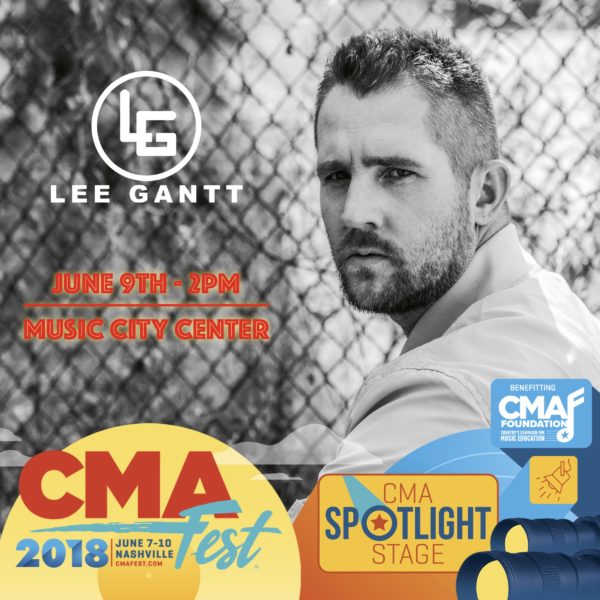 Additionally, Gantt will make an appearance on The Country Network as debut single “Ruined This Town” continues to gain momentum on the Music Row Chart.

Nashville, Tenn. – Lee Gantt, who recently debuted his first single “Ruined This Town” is proud to announce that he will be performing at the 2018 CMA Fest inside the Music City Center on the Spotlight Stage. His performance is scheduled for June 9, at 2:00 pm CT, with a 30 minute fan meet-and greet-immediately after his set.

“CMA Music Fest is such an amazing and immersive experience for the Country music fan,” Gantt stated, “and I am so excited to have the opportunity to perform for not only our fans but country music fans from all over the world!”

“Ruined this Town” has been steadily gaining momentum on Music Row’s Country Breakout Chart, having charted only 5 weeks after being added to rotation. Gantt’s debut single has now been added to over 18 station’s regular playlist, and is fast approaching reaching 1000 cumulative spins. Gantt was also named as the featured artist for the week of May 20 on Country AF Radio Las Vegas.

Gantt will also be making two separate appearances on The Country Network (TCN): From The Couch & On The Rise which is scheduled to be taped in Nashville in the coming weeks. Air times will be announced at a later date. The Country Network is available coast-to-coast in over 40 markets, reaching over 50 million households.

About Lee Gantt:
Lee Gantt hails from Columbus, Ohio, and honed his craft while attending college at The Ohio State University, performing at local clubs around the area. His music reflects the story-telling tradition of artists such as Hank Williams Jr and George Jones, while pushing the musical envelope in a likewise manner to today’s biggest artists such as Eric Church and Jason Aldean. He has opened shows for such chart-topping favorites as Dustin Lynch, Chris Young, and Colt Ford. Gantt has already started to develop a loyal legion of fans who follow him throughout his social networks, and have helped to make his 2017 debut EP Casa Blvd, a critically-acclaimed favorite.

Suggested Tweet:
YOU HEARD IT HERE FIRST! @LeeGanttMusic performing at @CountryMusic’s #CMAfest in support of the @CMAFoundation & music education! Catch him on the Spotlight Stage at 2pm on June 9 at Music City Center. #itstartswithME