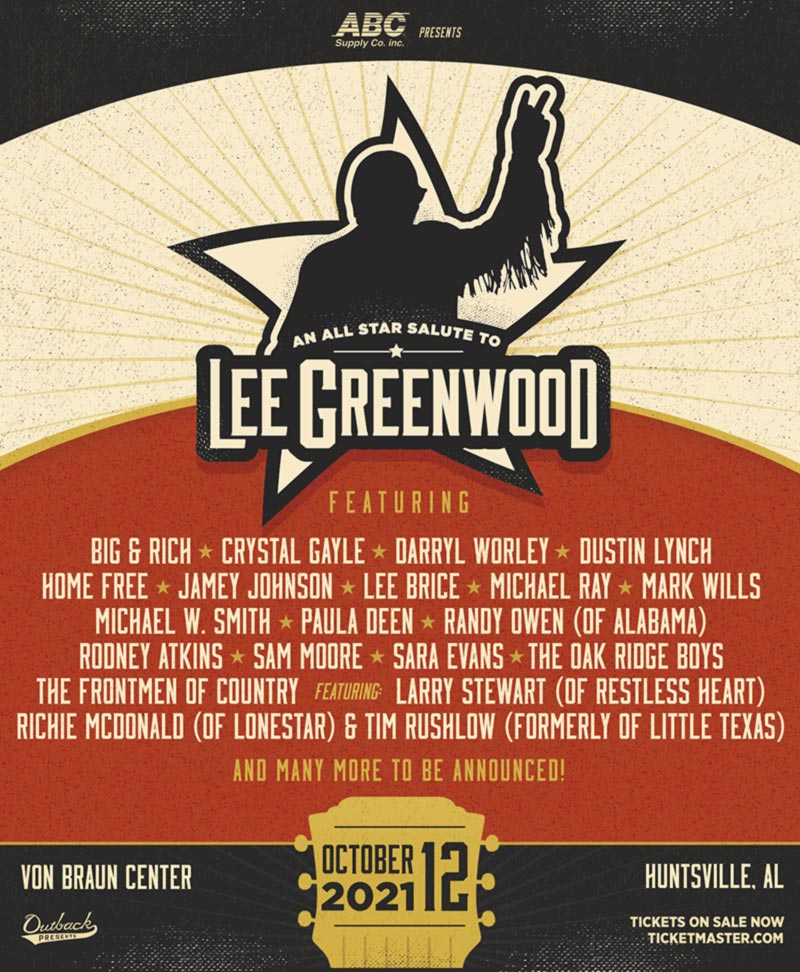 “I continue to be amazed as I learn who my music has impacted or affected. I am honored and thrilled that Sara Evans will be performing and I can’t wait for the audience to see what she has planned. She is a terrific talent along with Rodney and Darryl,” says Greenwood. “I recently awarded Paula Deen the Lee Greenwood Patriot award at a charity dinner in North Carolina and during the auction portion of the event, Paula’s husband was bidding on the auction package to come to this event. After the auction, I joked with Paula about it and invited her to come be part of this special night and she accepted the invitation. She and I will probably surprise some people with what we cook up for that night.”

Throughout his expansive career, Lee Greenwood has earned multiple CMA and ACM Awards, a Grammy Award for Top Male Vocal Performance on “I.O.U,” in 1985, and a multitude of other prestigious awards nominations. His discography includes twenty-two studio albums, seven compilation albums, seven No. 1 hits, and thirty-eight singles including songs like “It Turns Me Inside Out,” “Ring On Her Finger Time on Her Hands,” “She’s Lyin’,” “I Don’t Mind the Thorns if You’re the Rose,” “Dixie Road,” “Somebody’s Gonna Love You,” “Going Going Gone,” “You Got A Good Love Comin’,” among others.

Henry Repeating Arms will invite three distinguished veterans to the stage to honor them for their service to our country and present them with Henry Military Service Tribute Edition Rifles.

“We at Henry Repeating Arms are forever indebted to those who have served our country. Although we can never repay these men and women and their families for what they’ve done for us, these rifles are a small token of our gratitude,” said Anthony Imperato, President of Henry Repeating Arms.

For more information about Henry Repeating Arms and its products, and to request a free catalog and decals, visit henryusa.com.