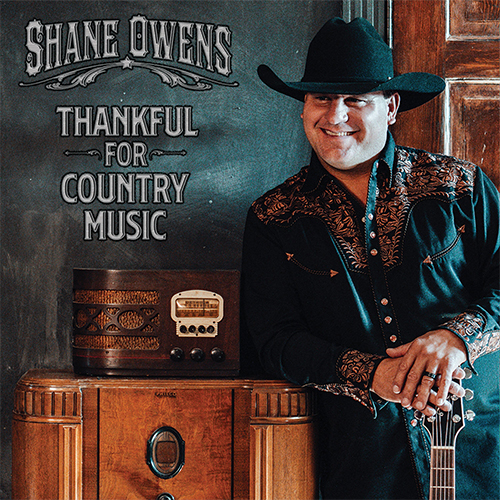 Celebrates with album release show in Dothan, Alabama at the Dothan Opera House, Dec. 6 at 7 pm

Owens set to host the Ernest Tubb Midnite Jamboree on 650 AM WSM, February 22 during CRS Week in Nashville

Blending his rich and bold baritone voice over a mixture of contemporary and classic country music sounds, Thankful For Country Music wraps the notes around his listener’s heart with traditional southern storytelling, wholesome family values, and a love for country. These are the hallmarks that Owens’ has built his reputation on as a country music artist.

“This album is the best one we’ve ever recorded,” Owens said. “I’m so thankful for all of the great songwriters and incredible musicians that collaborated with me to bring these songs to life. If you love traditional country music, this is it!”

Known for being one of the few modern day country artists who still pays homage to the old-school classic country sound, Owens journeyed to The Panhandle House in Denton, Texas to record the new album. He continues to work with Nashville-based songwriter Galen Griffin – who has penned hits for Clay Walker, Craig Morgan, Luke Bryan, and Joe Diffie – along with two of Owens’ past singles “Love To Try Them On,” and “Country Never Goes Out Of Style.”

Album Release Show, Dec. 6 in Dothan, Alabama:
Owens will celebrate the release of Thankful For Country Music along with his new holiday song, “Nothing Compares To Christmas” today in Dothan, Alabama at the Dothan Opera House at 7:00 pm. Tickets are available via Etix.com or by calling (334) 615-3175.

“We’ve got 11 brand new songs and we will debut all those songs that night and everybody will be able to hear it for the first time,” Owens said. “That will be the first opportunity.”

A limited supply of the physical albums will be made available at the show ahead of their official December 13 release date.

What Country Radio Is Saying:
The album’s first single “Hard Luck Girl” released on September 13, and currently sits at #45 on Music Row’s Country Breakout Chart where it’s been on a steady climb, fueled by the 100+ country radio stations currently spinning the tune. Owens released a concept video for the song on September 26 [Click to watch], which was exclusively premiered by Country Rebel [click for press release].

“Shane continues with his string of new, traditional country inspired releases. Another one to sing along to… a sound that again fits the artist!”

“It’s always a comfort to know that when I get a Shane Owens record, I know I’m going to get a top quality, truly country song that will immediately click with my listeners and ‘Hard Luck Girl’ is no exception. This guy is leading the charge of neo-traditionalists who are taking the ‘country’ back.”

“I just bought Shane Owens latest album. It is destined to be a country classic. There’s not a song on it I don’t love. I’ve had it on repeat all morning and can’t stop listening.”

2020
MAR 13 – The Depot / Ashford, Ala.
MAR 28 – Opp Rattlesnake Rodeo / Opp, Ala.
For the most updated schedule, please visit ShaneOwensCountryMusic.com.

About Shane Owens:
Named by Rolling Stone Country as one of the “10 New Country Artists You Need To Know,” and awarded 2018 Music Row Independent Artist of the Year, Shane Owens has been building a strong following across the Southeast for more than a decade. His powerful vocal range combined with the emotional lyrical content of his songs has made him a favorite of fans, critics, and his fellow artists alike. After starting his career by opening shows for dozens of major stars in the mid-2000s, the baritone performer attracted the attention of Nashville music executives, and he soon landed a record deal. However, with all the changes in the music industry at the time, his album was shelved and never released. Just like the ‘Never Give Up’ mantra of his lyrics, Owens picked himself up and moved on, thanks to famed producer James Stroud (Tim McGraw, Aaron Lewis, Clint Black), country music legend Randy Travis, who co-executive produced his first album, Where I’m Comin’ From, and Amerimonte Records. Never one to sit still for long, Owens followed up with his most recent release It’s A Southern Thing and is currently impacting at radio with his latest single “Hard Luck Girl” from upcoming album, Thankful For Country Music (Dec. 6). For more information about Shane Owens, visit www.shaneowenscountrymusic.com.