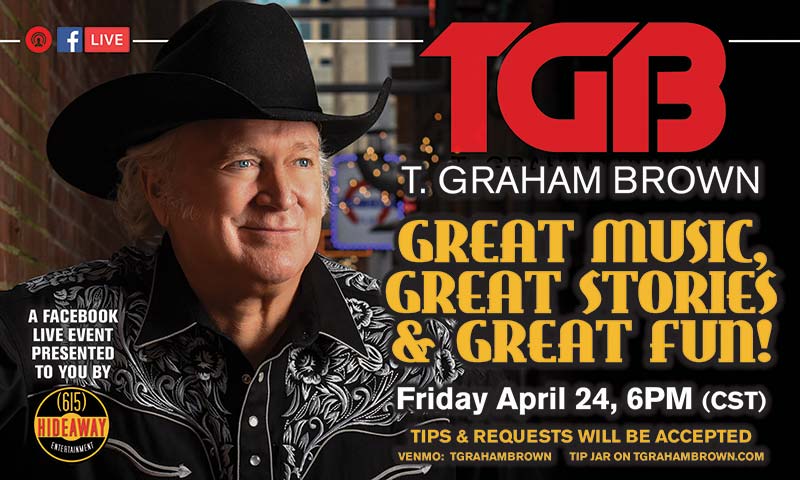 Anyone wanting to host a “Watch Party” or “Crosspost” can do so by contacting Austin Smith – austinsmith25@yahoo.com

NASHVILLE, Tenn. – As social distancing continues the music refuses to stop, and T. Graham Brown is dedicated to doing his part by bringing a hearty dose of laughter and light-hearted tunes to all. The Great Music, Great Stories, and Great Fun live stream show will do just that. Country hit-maker T. Graham Brown is sharing stories, taking song requests and bringing needed humor to fans at home through this special live stream show on Friday, April 24th at 6:00PM CST.

“I am so excited to do another show during these tough times,” says T. Graham Brown. “This one in particular will include some of my hits, but also some deeper catalog and personal favorites. We are going to have a lot of fun, share some laughs and include some stories that will take you down memory lane. I hope you will join us!”

In early 2015, Brown released his latest Grammy nominated album, Forever Changed, which featured collaborations with Vince Gill, Jason Crabb, The Oak Ridge Boys, Jimmy Fortune and more. T. Graham Brown still actively tours throughout the year, including multiple appearances on the legendary Grand Ole Opry and television appearances such as Larry’s Country Diner and Country’s Family Reunion. Brown’s uniqueness has made him one of the most beloved and iconic performers of the day.

For more information, visit www.tgrahambrown.com and follow his socials linked below.