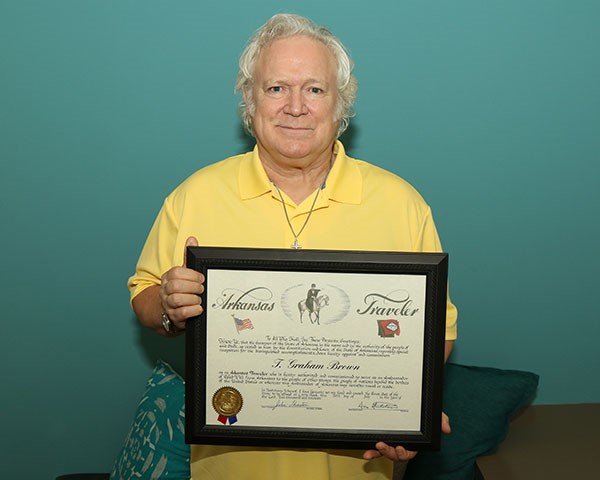 NASHVILLE, Tenn. – Country and Gospel hit-maker, T. Graham Brown was surprised at the Independence County Fair in Batesville, Arkansas with the ‘Arkansas Traveler’ award. This award is an honorary title given to notable individuals who serve as goodwill ambassadors of Arkansas. The honor, bestowed upon Brown by Governor Asa Hutchinson, was presented by Senator James Sturch. Past recipients of this prestigious award include Muhammad Ali, Garth Brooks, Gene Autry, Roy Rogers, Dale Evans, Billy Graham, Bob Hope along with Presidents Franklin D. Roosevelt, Ronald Reagan and Donald Trump.

“The Governor of Arkansas bestowed the high honor of the ‘Arkansas Traveler’ award upon me,” says T. Graham Brown. “Thank you so much to the people of Arkansas for making me an ambassador for their great state. It is such an incredible honor.”

As part of the ‘Church Sessions’ series, produced and presented by Country Rebel, T. Graham Brown’s acoustic performance of “Hell And High Water” premiered today, preceded by “Wine Into Water” July 21st and “Darlene” July 18th. “I Tell It Like It Used To Be” is set to premiere August 1st. Country Rebel’s ‘Church Sessions’ were filmed earlier this year at the Nashville Vineyard Church and include over thirty artists. The series has accrued over 20 million total views to date.

The Bell Buckle, Tennessee Chamber of Commerce crowned T. Graham Brown and his wife Sheila as the 2019 RC Cola and MoonPie King and Queen in June. Along with these honors, T. Graham Brown maintains a full summer tour.