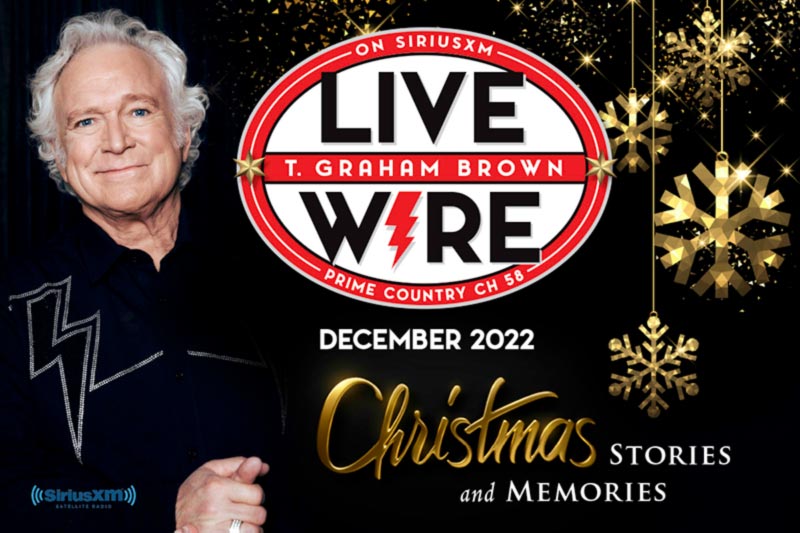 NASHVILLE, Tenn. – Starting Wednesday, December 7 at 10/9c, country hit-maker T. Graham Brown will host another exciting month of live cuts with some of his closest friends and heroes on the new episodes of LIVE WIRE on Sirius XM’S Prime Country Channel 58. Make sure to tune into December’s episodes for some Christmas favorites recorded live over the years at SiriusXM’s Music City Theater in Nashville, Tennessee.

“Ho-Ho-Ho and Merry Christmas! It’s that time of year again and I went through all of the archived Christmas shows recorded live at SiriusXM’s Music City Theater located in The Bridgestone Arena and picked out some treasures that we all love,” shares Brown. “While you’re wrapping presents, be sure to tune in for your Holiday favorites, and remember, San-T’s on his way!”

About T. Graham Brown:
T. Graham Brown is a CMA award winner and currently hosts Live Wire on SiriusXM’s Prime Country on a monthly basis. He has recorded 15 studio albums and charted more than 20 singles on the Billboard charts. He has had multiple number-one hits in country, gospel, and blues. Brown’s voice is also recognized from his singing in advertising campaigns for McDonald’s, Disneyland, Almond Joy, Coca-Cola, Dodge Truck, Ford, Hardee’s, and many others including the Taco Bell “Run For The Border” television spots. In early 2015, Brown released his latest Grammy-nominated album, Forever Changed, which featured collaborations with Vince Gill, Jason Crabb, The Oak Ridge Boys, Jimmy Fortune, and more. In 2020, Time Life partnered with T. Graham to reissue several of his classic albums and has recently released his latest album Bare Bones. T. Graham Brown still actively tours and is sponsored by Hillbilly Iced Tea and Lemonade and makes multiple appearances on the legendary Grand Ole Opry. Brown’s uniqueness has made him one of the most beloved and iconic performers of the day.