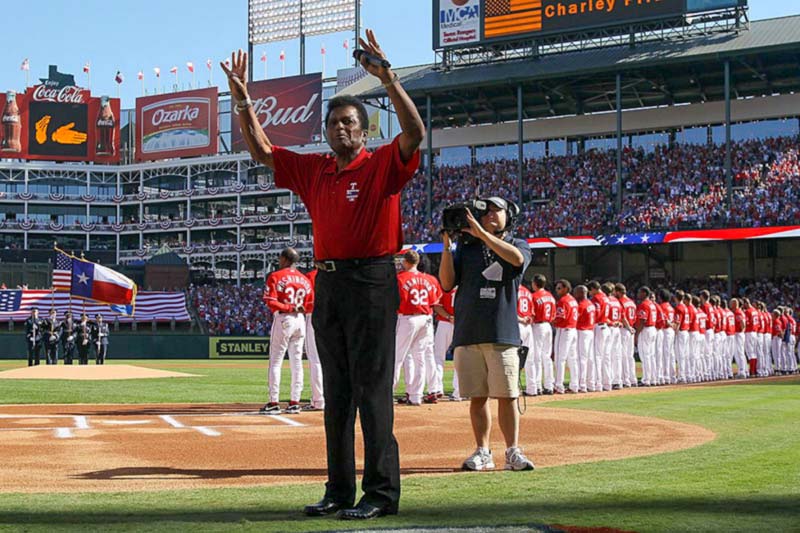 SURPRISE, AZ – The Texas Rangers paid tribute to late country legend Charley Pride — the baseball player-turned-trailblazing country singer who also held a part-ownership stake in the MLB team — by naming a field at their spring training complex after him.

The Rangers announced the dedication Sunday on Twitter with the unveiling of the “Charley Pride Field” signage at their Surprise, Arizona spring training site. “Introducing Charley Pride Field! You are greatly missed,” the team tweeted:

You are greatly missed. pic.twitter.com/v46HyO2EQ3

Pride died December 12th, 2020 from complications related to Covid-19. At the time of his death, Pride was part of the ownership group that purchased the Texas Rangers in 2010; in the decade that followed, Pride frequently visited the team, including annual stops at the spring training facility.

“Mr. Pride’s first love was baseball. He pitched professionally in the Negro and Minor Leagues throughout the 1950’s before embarking on his Hall of Fame singing career of more than 60 years,” the Rangers said in a statement following Pride’s death.

“Mr. Pride then became a regular participant at Texas Rangers spring training camps in Pompano Beach and Port Charlotte, Florida and Surprise, Arizona, working out with the team and staging an annual clubhouse concert for players and staff, a tradition that continued through this past spring.” Even before assuming part-ownership, Pride was a fixture at the team’s spring training. [WATCH]

One of Pride’s final live performances was singing the National Anthem in July 2020 at the first-ever baseball game played at the Rangers’ new Globe Life Field in Arlington, although the stadium was empty to do coronavirus restrictions. [WATCH]

“The Rangers have been honored to have Mr. Pride be a part of the team’s ownership group for the last ten years. A longtime resident of this area, he was a regular at home games when his schedule permitted… Mr. Pride was a true gentleman, and we will never forget the lasting contributions he has made to the Texas Rangers organization,” the team added in December.

About Charley Pride:
Charley Pride celebrated more than 50 years as a recording artist. He enjoyed one of the most successful careers in the history of country music and is credited with helping to break color barriers by becoming the first black superstar within the genre. A true living legend, he sold tens of millions of records worldwide with his large repertoire of hits. A three-time GRAMMY® award and Recording Academy “Lifetime Achievement Award” winner, Pride garnered no less than 36 chart-topping country hits, including “Kiss An Angel Good Morning,” a massive #1 crossover hit that sold over a million singles and helped Pride land the Country Music Association’s “Entertainer of the Year” award in 1971 and the “Top Male Vocalist” awards of 1971 and 1972. A proud member of the Grand Ole Opry, Pride performed concerts worldwide and has toured the United States, Canada, Ireland, the United Kingdom, Australia, and New Zealand over the last several years. He received the Crossroads Of American Music Award At the 2019 GRAMMY Museum® Mississippi Gala in November of 2019, and the Country Music Association’s Willie Nelson Lifetime Achievement Award one year later in November 2020. On December 12, 2020, Pride died at the age of 86 from complications due to COVID-19. His memory and storied legacy will live on through his vast library of stories and songs, with forthcoming plans for a final album release, public celebration of life ceremony, tribute concert, and biopic film.