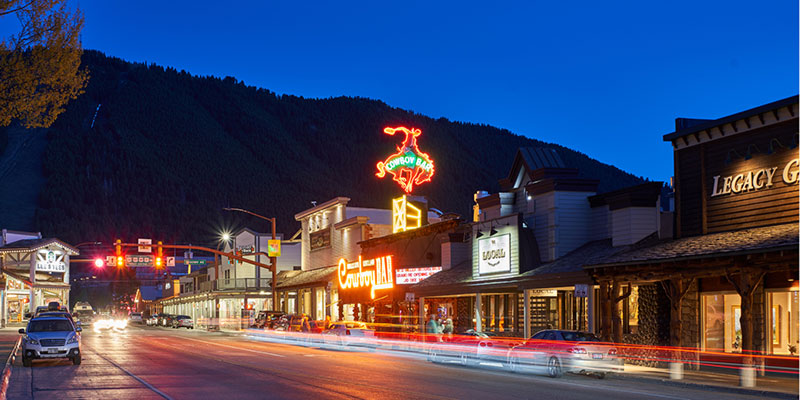 Iconic Honkytonk Continues to Plant Musical Flag in the West

JACKSON, WY – In a year dominated by headlines that ranged from depressing to worrisome to downright scary, when people and businesses were forced to reevaluate and pivot all that had been “normal,” The Million Dollar Cowboy Bar and its sister bar and live music venue, The Silver Dollar Showroom at the Wort Hotel, found a way to saddle up and keep riding. After having to cancel one headline show in the first days of the shutdown, in March of 2020, The Cowboy was determined to continue fulfilling its commitment to supporting and presenting live music.

Prominently situated on The Town Square in Jackson, WY, The Million Dollar Cowboy Bar is the venerable honkytonk founded in 1937 and purchased by the new owner, Silver Dollar, Inc. (SDI) in 2018. It’s a venue that, during the 70s, artists who were too big to perform there—legends like Waylon Jennings, Willie Nelson, Glen Campbell, Hank Williams Jr., and others—still did, because of the “cool factor.” While that vibe might have waned in the ensuing decades, since taking it over, three years ago, SDI has fast-tracked its own five-year plan to return The Cowboy Bar to its iconic national status.

In 2020, while other venues across the country were hamstrung by governmental or self-imposed restrictions, The Cowboy chose to meet, then overcome, the challenges of the new and changing environment. “The discussion was never ‘why can’t we do this,’” said Bill Baxter, owner of SDI, “but ‘how can we do it?’” Instead of dropping back, SDI redoubled its commitment to live music, actually raising the bar with the talent presented. “In the twelve-plus months of the ‘shutdown,’” Baxter continued, “we presented seven sold-out shows by six headliners. And in each case, we were the artist’s first show back. We were honored to play this role for them—and for our audiences. Our goal has always been to continue to support live music in America, and to give fans in the region—and across the country—the entertainment we all love.”

For most touring artists, the shutdown was immediate and long-lasting. Acts that were used to performing dozens—or even hundreds—of shows per year, found themselves home, with all upcoming shows canceled or postponed indefinitely. “Like most artists, I hadn’t played a show in over a year,” Hank Williams, Jr said. “So many concerts had canceled. When The Million Dollar Cowboy Bar offered us the chance to come up here and do our thing, I jumped at it.”

The Oak Ridge Boys, another act, long known for performing more than 150 shows per year, suddenly saw something they hadn’t seen in decades: a calendar empty of show dates. Long-time Oaks’ lead-singer Duane Allen remembers, “We returned from a show in South Carolina in March 2020, fully expecting the buses to roll out again soon. But over the next few months we lost more than 100 confirmed shows, all canceled or rescheduled because of the COVID shutdown. Our first public show after the shutdown was at The Cowboy Bar. When it was announced, it sold out so quickly, a second show was added. As far as we were concerned, if a buyer was willing to safely keep a show on the books, it was important to us to be there. We are looking forward to coming back. We loved The Cowboy Bar, and all of the people in this historic place!”

Since its “Toast to the Cowboy” event that marked its official reopening in May of 2018—a show featuring county hitmaker, Jo Dee Messina—The Cowboy has welcomed both legendary artists and exciting new-country acts. Midland has sold out three shows; The Oak Ridge Boys and Runaway June, two each. Other acts as varied as Diamond Rio, Lee Roy Parnell and newcomer, Jenny Tolman have appeared in sold-out performances. Hank Williams, Jr’s return in 2020 marked his first-ever unplugged show, and Randy Owen took a break from his lead-singer duties with ALABAMA to appear in early 2021. Both shows sold out in minutes. And one night, while making an unannounced visit to the mountain town, superstar, Toby Keith walked through the doors of The Cowboy, and, before long, ended up on stage singing with the house band. That very you-never-know-what-to-expect environment is what SDI has been working to create.

The Million Dollar Music Fest, presented by The Cowboy Bar, was held over the recent Memorial Day weekend. It couldn’t be staged on the Town Square as it had when it drew 5,000 people in 2019, but, despite the relatively limited capacities of The Cowboy Bar, nearly a thousand ticket buyers from twenty-eight states converged on Jackson Hole for the opportunity to see Midland, Runaway June, and Jenny Tolman. According to Jim Waldrop, president of SDI, canceling the festival for the second year in a row was never considered.

“The 2020 Music Fest was to have been held just weeks after the shutdown,” Waldrop said. “We really had no choice but to cancel then, but throughout all of the ups and downs of the last fifteen months, we remained in constant contact with the officials in town, with an eye towards staying on schedule and presenting our shows safely.”

With the shutdown gradually easing across the country, more and more venues are returning to normal activities, and that suits The Cowboy just fine since it creates other opportunities to feature artists who are on their way to or from other towns in the region. While The Cowboy has remained active, the continued relaxing of restrictions will only allow for more shows by more big-name acts.

“We have some very exciting plans already in place for the very near future,” Baxter said. “Live music never stopped in Jackson Hole, and we’re proud of the role we played in that. Now, it’s only going to get bigger and better! We invite folks from all over the country to saddle up and come join us!”