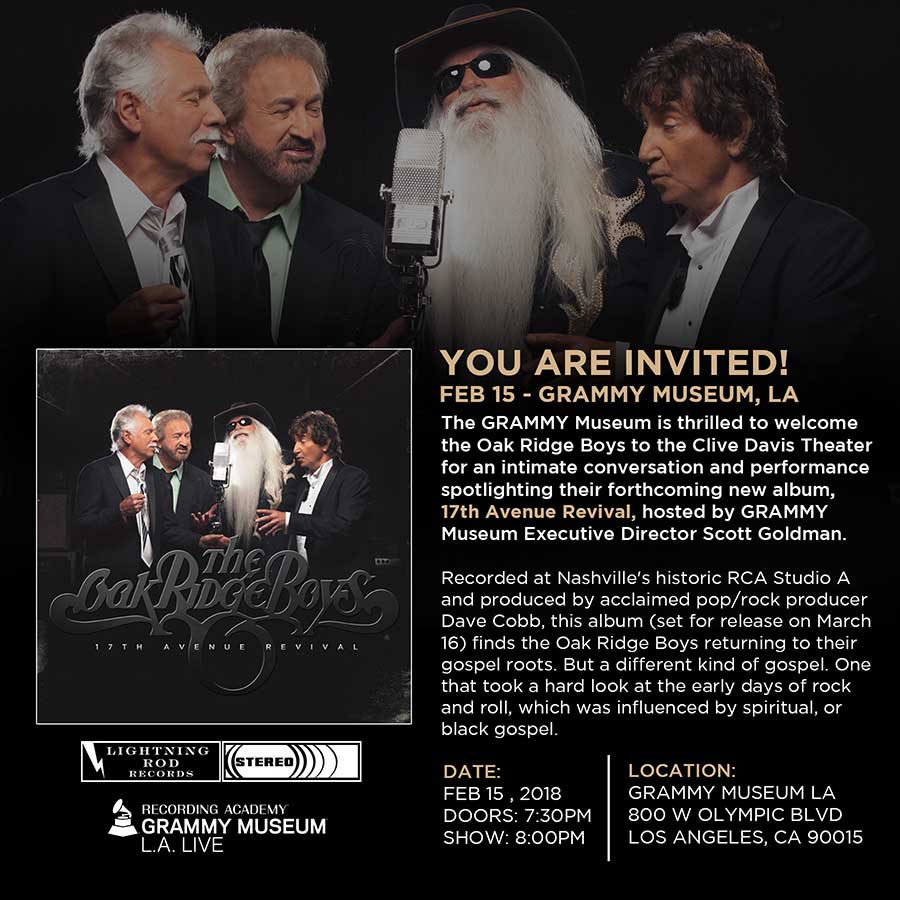 The GRAMMY Museum is thrilled to welcome the Oak Ridge Boys to the Clive Davis Theater for an intimate conversation and performance spotlighting their forthcoming new album, 17th Avenue Revival. The performance will be hosted by GRAMMY Museum Executive Director Scott Goldman. Recorded at Nashville’s historic RCA Studio A and produced by acclaimed pop/rock producer Dave Cobb, this album (set for release on March 16) finds the Oak Ridge Boys returning to their gospel roots. But a different kind of gospel. One that took a hard look at the early days of rock and roll, which was influenced by spiritual, or black gospel.

While in Los Angeles, the Oaks have scheduled a sit down interview with Dan Rather Tuesday, February 13th for The Big Interview on AXS TV to profile their iconic growth from gospel to country giants, followed by an appearance on Hallmark Channel’s Home & Family February 14th which is set to air Thursday, February 15th.

Known for their four-part harmonies and upbeat songs, the Oak Ridge Boys have spawned dozens of country hits, earned five GRAMMYs®, Dove, CMA, and ACM awards, and an assortment of other industry accolades. Their career has spanned not only decades, but also formats. In 1977, Paul Simon tapped the Oak Ridge Boys to sing backup on his hit “Slip Slidin’ Away,” and they went on to record with George Jones, Brenda Lee, Johnny Cash, Roy Rogers, Billy Ray Cyrus, Bill Monroe, Ray Charles, and even Shooter Jennings, the son of their old friend Waylon Jennings and Jessi Colter. In 2009, the group recorded their album, The Boys Are Back, with Cobb. The project included their cover of The White Stripes’ “Seven Nation Army,” which received accolades from rock reviewers. In 2011, the group released their album, It’s Only Natural, through Cracker Barrel Old Country Store. In early 2014, the Oak Ridge Boys celebrated 41 million RIAA-certified records sold by signing a new record deal with Los Angeles-based Cleopatra Records, releasing Boys Night Out, a 14-song live project. The Oak Ridge Boys have since been inducted into the Country Music Hall of Fame, where their history will forever be enshrined.

About the Grammy Museum:
Established in 2008 as a partnership between the Recording Academy and AEG, the GRAMMY Museum is a non-profit organization dedicated to cultivating a greater understanding of the history and significance of music. Paying tribute to our collective musical heritage, the Museum explores and celebrates all aspects of the art form—from the technology of the recording process to the legends who’ve made lasting marks on our cultural identity. In 2017, the Museum integrated with its sister organization, the GRAMMY Foundation, to broaden the reach of its music education and preservation initiatives. As a unified organization, today, the GRAMMY Museum fulfills its mission of making music a valued and indelible part of our society through exhibits, education, grants, and public programming.