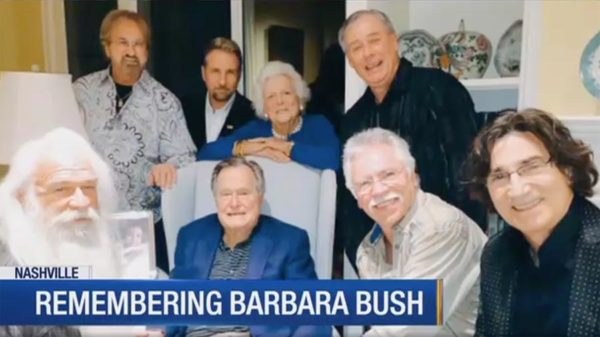 The Oak Ridge Boys have shared the Bush’s company almost every year since 1982 when George H.W. Bush was Vice President to Ronald Reagan. President Reagan had invited the group to play at the Congressional barbecue on the lawn of the White House, and that afternoon they saw the Vice President taking long strides toward them.

“I can’t be at the show tonight, fellas,” he said. “But I love The Oak Ridge Boys, so could you sing a few songs before I go?”

Since that time, the Oaks and their wives have been the guests of President and Mrs. Bush at their homes in Kennebunkport and Houston, or on one of the numerous occasions where the Bushes have attended the Oaks’ shows, most often at the Opera House in Galveston, Texas.

They have also been guests at and/or performed at the White House at the behest of the Bushes. During President Bush’s re-election campaign, the group traveled on Air Force One with the First Couple.

From Joe Bonsall’s book On the Road with The Oak Ridge Boys (Harvest House, 2015) —Two events with President Bush #41 are very memorable. Once, while he was President, we were in the Oval Office with him, and he said, “Hey, I have to show you where I listen to you fellows here… I have a new sound set that is just great.”

Well, he leads us to a small private inner office right behind the Oval Office and he turns on the sound. Immediately “Dig A Little Deeper In The Well” blares out of the speakers, and we are all grooving and laughing when I notice the RED PHONE on the desk. I was thinking, ‘Boy, if this rings he will never hear it!’

Then there was the time on the campaign trail that has been chronicled in several books. We were on Air Force One and everyone on the plane knew that the election in 1992 was lost and that the young Governor of Arkansas, Bill Clinton, would be the next President. Well, President Bush’s son George W. Bush came back to where we were seated and spoke in a soft voice.

He led us to the front of the plane to a version of the Oval Office and there sat the President. We gathered around him and sang “Amazing Grace.” There was not a dry eye on Air Force One as everyone came up to the front as we sang. I will never forget that moment as long as I live. None of us will!Also from On the Road…George and Barbara Bush have invited The Oak Ridge Boys and our wives to Kennebunkport, Maine many times over the years and for us it is like staying at the world’s greatest bed and breakfast – only much better! The historic vibes alone in this wonderful place is mesmerizing. World leaders of all kinds have met here over many decades and to stand here on this veranda and gaze out over the North Atlantic is always very humbling and thought provoking. We have put on some wonderful private shows for the Bush family and their friends here and as a reward for singing we eat great food and even get to go fishing way off the Maine Coast with #41 on his monster speedboat The Fidelity. As recently as last fall (2014) the four of us were singing in New York State and made a quick swing over to Maine to share a bit of Lobster with the Bushes at Walkers Point. Talk about old friends… These precious people are getting older now as well and I dread the day when I will hear that we have lost them. The greatest memories I have during this life of singing songs are the direct result of our friendship with George and Barbara Bush.

– One time at Walker’s Point a bunch of those Segway things turned up. Everyone was freewheeling all around the grounds when a secret service agent invited me to give it a try. I (Joe) lost control immediately and went head over teakettle right into Barbara Bush’s garden. I really made a mess, too. I ran to my cabin to bandage up and hide from her for almost two hours.

– In late 2013 we were told that CNN Films and The Bush #41 Library and Foundation was putting together a documentary that would show right after the 90th Birthday of George H.W. Bush in June of 2014. Well, a camera crew came to a show and filmed us sitting in a semi-circle telling stories. That night on the show the crew filmed us singing “Amazing Grace” and that was it. Fast forward to June 15, 2014. The film is called “41 on 41,” where the complete story of the 41st President of The United States is revealed through the lens and the story telling of 41 friends. It was magnificent and very moving. I sat in front of my TV and took in every moment, but I’ll tell you as I witnessed the way the documentary flowed I could not envision The Oak Ridge Boys fitting in and we didn’t. As the two-hour film entered the last half hour I really figured that we had ended up on the editing room floor and I was fine with it. I was so honored just to know this man, and I was so moved by the story of this great American. Then with two minutes left I heard my voice saying, “Here is a song for our President George Herbert Walker Bush” and there I was up on the screen. We started to sing “Amazing Grace.” There appeared a full panorama of the Oaks and the script underneath said, ‘The Oak Ridge Boys in a special performance.’ Then the credits rolled as we continued to sing, and I was so overcome with emotion that I wept my eyes out right there on my couch! We were the only music act to appear on “41 on 41,”and we will forever be grateful to CNN Films and The George H.W. Bush Library for including us. AGAIN… we are honored beyond words to once again sing “Amazing Grace” for our President… George Herbert Walker Bush!
Duane Allen shares a fun story about the family’s famous dog Millie:

“We were eating dinner with the Bush family at Kennebunkport… “Millie”, the famous dog, was hanging around me because I had been playing with her. So, I gave her a bite from my food, and Barbara caught me. She asked, “What are you doing? Millie is on a strict diet, and you cannot give her food from the table.” I felt like crawling under the table. What Barbara did not know was this – earlier in the afternoon, I had been out on the deck, watching the ocean and enjoying just being outside. I was drinking sweet iced tea and eating pistachio nuts – throwing the nut shells over the deck wall, down the rocks that led to the ocean. “Millie” had been with me on the deck, and we became good friends quickly. What I did not know was that “Millie” would disappear and go around the deck wall, and eat those pistachio nut shells. I looked around and they were all gone – she had eaten all of those shells. Well, at the dinner table later on, “Millie” had come to me for more treats. I dared not tell Barbara that she had been eating pistachio nut shells all afternoon. I expected that she would get sick or die from those shells. Thank God she just passed them on! Hahahaha! “Barbara, if you are reading this, I am sooooo sorry.” – Duane

– Texas born Duane Allen campaigned for the young politician in the 1960s. Duane and his college buddies covered areas around northeast Texas with flyers. He was attending Texas A&M at Commerce, Texas:

I did not meet the Bush family in the 60’s. My older brother John Allen was in the House of Representatives and he asked me to place flyers on cars and strip malls all over northeast Texas. My brother was the first person to ever tell me about George Bush. I said to him, “We Allens are Democrats.” My brother John, a Democrat, said, “I know, he is a Republican, but we need to get him elected because he is a good man.” – Duane

– Richard’s wife, Donna, chaired the Bushes’ 50th Wedding Anniversary celebration at the Grand Ole Opry House in 1995. The event was a fundraiser for several charities and attended by the Bush family as well as friends, celebrities, and political dignitaries.

– Barbara Bush not only encouraged Joe to write his parents’ memoir, G.I. Joe & Lillie: A Life of Love & Loyalty (New Leaf Press, 2003), she contributed the Foreword to the book.

– William Lee Golden’s oil painting, entitled Bush Garden, which was inspired by a walk in Mrs. Bush’s garden at Walker’s Point, has been displayed at the George H.W. Bush Presidential Library and Museum.