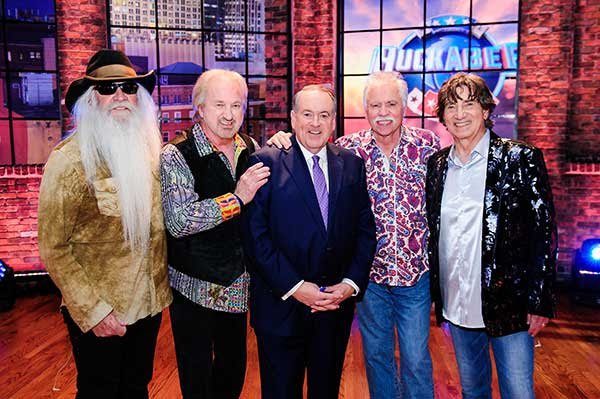 Made up of members Duane Allen, Joe Bonsall, William Lee Golden and Richard Sterban, The Oak Ridge Boys are members of the Grand Ole Opry and achieved, arguably, country music’s highest honor when they were inducted into The Country Music Hall Of Fame in October 2015.

The group has given many command performances throughout their legendary career, from performing for King Gustaf of Sweden, to Her Royal Highness Princess Caroline of Monaco, to Her Royal Highness Princess Anne of Great Britain and five U.S. presidents: Jimmy Carter, Ronald Reagan, George H.W. Bush, Bill Clinton and George W. Bush. In 1976, they performed in Russia during the “Iron Curtain” days on a three week tour with Roy Clark – a first for ANY country music artist.

Since the start of their highly decorated career, the Oaks have achieved five GRAMMY® Awards, and multiple CMA, ACM and Dove Awards for their crossover brand of pop, country and gospel music that spans multiple generations.

In front of an at-capacity, standing-room-only crowd at the Country Music Hall of Fame™ and Museum CMA Theater on Monday (3/5) night, The Oak Ridge Boys electrified with hit after hit, and then introduced their the new album. In addition, and in typical Oak Ridge Boys fashion, the group set a unique precedent by presenting the Country Music Hall of Fame with a special Edison cylinder recording of “Brand New Star,” the first track from their new album.

“It’s exciting to me that our manager, Jim Halsey, and Logan Rogers, President of Lightning Rod Records, were able to envision the idea of releasing the new album, all or in part, on virtually every format of commercial recording technology since the Edison cylinder — and to find people to record ‘Brand New Star’ on cylinder,” said Duane Allen.

“We thought it was a fantastic idea to include vinyl, cassette, CD and cylinder — the only format we left out was eight-track and, who knows, that might be next.” Allen said. “It’s proof that our team can cover all the bases, while coming up with a fun and provocative promotion for the new product.”