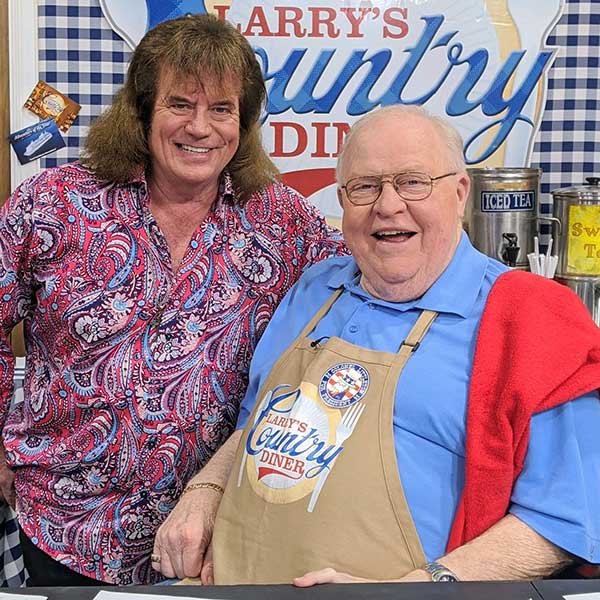 Never one to sit still for long, Atwood has been in the studio wrapping up his fourth studio album ‘Who I Am,’ which showcases Atwood’s versatility as a writer and a performer as he takes his fans on a musical journey that includes his self penned, country shuffle “Migraine Heartache” as well as Delbert McClinton’s soulful anthem “Sending Me Angels.” Atwood has never been an artist who readily fits into any one box. Instead, he relishes his love of playing outside of the box.

“I think ‘Who I Am’ is the best work I’ve ever done. I am proud of this project and proud to debut four of the album’s fifteen songs on Larry’s Country Diner. Not only is it an honor to perform on a show that continues to promote and support our music, but Larry Black, along with his cast and crew, have created an environment of family and fun. When you visit the diner, you feel like you’re coming home. I absolutely love that,” shares Atwood.

To keep up with everything Tim Atwood, visit his website and socials linked below.

About Tim Atwood:
Tim Atwood is an award-winning entertainer honored in our nation’s Congressional Record for his many contributions to country music as a performer and a studio musician. Winner of the 2020 Telly Award for Social Media Event of the Year, Tim is a 38 year veteran of the Grand Ole Opry stage and a member of the world-famous Wheeling Jamboree. He is proud to include memberships into the ALM Musician’s Hall of Fame, along with an artist membership into the North American Country Music Hall of Fame, to his list of accolades. After a recent nod by the Reunion of Professional Entertainers for Songwriter of the Year, Tim’s song “That’s How I Roll” was recorded as a collaborative effort by Jeannie Seely, Lorrie Morgan, and Vince Gill. Tim’s TV appearances include the Hallmark channel’s Home & Family show, Huckabee, Larry’s Country Diner, The Dailey & Vincent Show, Country Family Reunion, Opry Live, and Hee Haw. Voted “Fan Favorite” by the Genuine Country Music Association, Tim’s recent live stream performances during our world’s new normal, have been viewed by over 600,000 country music fans.