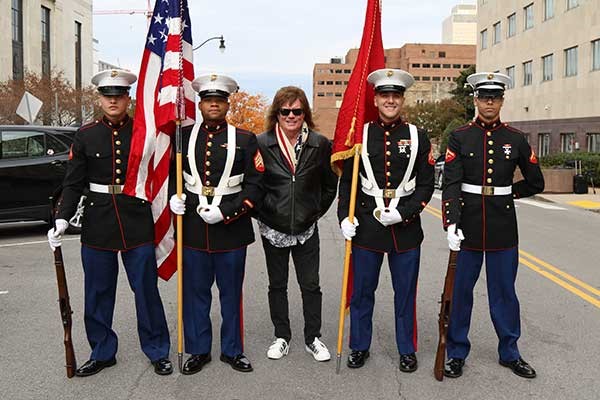 Atwood’s son Torre, a U.S. Army veteran and Purple Heart recipient, rode with him during the parade as one of the honored guests.

“This morning I was honored beyond belief to ride in the Nashville Veterans’ Day Parade,” said Atwood. “What makes this day extra special for me is the fact that my son, Torre, also rode in the car with me. Torre is a purple heart veteran who served two tours in Iraq.”

Torre served two tours of duty during the Iraq War in the Army’s 3rd Infantry Division, 69th Armored Battalion, leaving with the rank of Sergeant. Atwood’s son was injured in April of 2007 suffering hearing damage as a result of an attack on his tank.

“I am very proud of him,” Atwood said. “And they always say when you have someone in the service, the whole family serves. I aged probably 20 years in the five years Torre was in the service,” Tim said. “Having your kid in the war zone and he’s only 21 makes you nervous. That was one of the scariest times of our lives.”

“From the bottom of my heart I say ‘thank you’ to all who have served and continue to serve,” said Atwood. “Happy Veterans’ Day to you all! We are the land of the free because of the brave. In a time that seems to idolize professional athletes and rock stars, you are my heroes! God bless you!”

Atwood received a nod for ‘Entertainer of the Year’ from the Reunion of Professional Entertainers in Nashville earlier this year. He was also recently surprised at the Midnite Jamboree with honors from Tennessee Governor Bill Lee, Illinois Governor J.B. Pritzker, and Nashville Councilman Jeff Syracuse, for his 50th Anniversary in country music.

About Tim Atwood:
Tim is originally from East Peoria, Illinois. He began his music career playing gospel music at the age of thirteen for The Harris Family. Before settling in at the Grand Ole Opry, Tim toured with country legends Mel Street, Lynn Anderson and Jim Ed Brown where he can still be seen regularly on the rebroadcasts of Jim Ed’s TV series Nashville On The Road. Tim’s other TV credits include Home & Family, Larry’s Country Diner, Another Wednesday Night Prayer Meeting, Opry Live, Nashville Now, Hee Haw, Church Street Station, Country On The Gulf, Pop Goes The Country, Country Connection, Late Night With David Letterman, The Dailey & Vincent Show and features on CBS, NBC and FOX News.